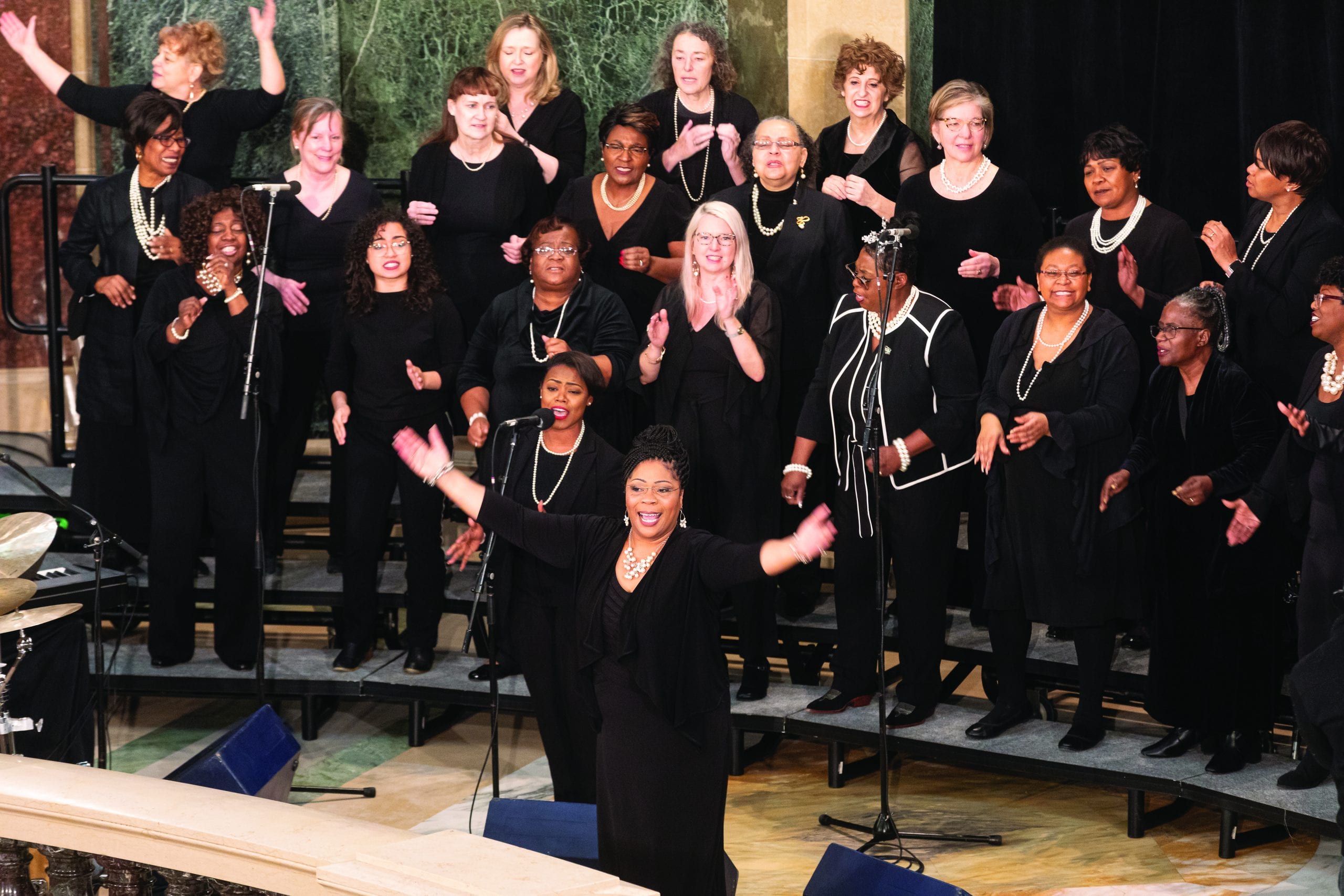 Music and singing were critical in inspiring, mobilizing and giving voice to the civil rights movement. The anthems were the soul of the movement.

Like freedom fighters at a peaceful rally for justice, hundreds gathered in the rotunda at the Wisconsin State Capitol to celebrate the birthday of Dr. Martin Luther King Jr. through songs and words of inspiration. People from across the state gathered for the 40th annual MLK Tribute themed “Stand for Justice.”

Dr. Jonathan Overby, executive producer of the longest standing MLK tradition of any U.S. state, sang a rendition of Motherless Child that brought a collective hush over the crowd. The Milwaukee native, who began his career in radio as a student sports play-by-play announcer at Rufus King High School, has been organizing the widely popular, family-friendly event for four decades.

“I stand before you as I did in 1980 to celebrate the life and legacy of Dr. King,” Overby said. “Like many of you, I’m here also to draw attention to the familiar stench of hatred, fear of others and the misguided conflation of nationalism as though it was a cornerstone to patriotism.”

While many cities and towns don’t flaunt the blatantly discriminatory practices as was done in the 1960s in the deep South, there is, still, hidden from sight, the seeds of injustice — like a root that will not die, Overby said. He urged all to work together toward a common destiny and justice.

Overby, who produces The Road To Higher Ground program on Wisconsin Public Radio, received formal musical training in voice at San Francisco State University. When he returned to Wisconsin, he began performing extensively throughout Wisconsin, the U.S. and Europe with some recital tours in Germany, Switzerland, Japan, and Poland. For nearly two decades, he produced and hosted “The Best of Gospel with Jonny O” on the W.O.R.T. Community Radio station in Madison.  The program, which he created, still airs and retains its original title today.

The keynote speaker, Dr. Ollie Watts Davis, demonstrated her vocal range when she began her speech by singing “My Country, ‘Tis of Thee”.  She is the Suzanne and William Allen Distinguished Professor of Music, Provost’s Fellow and conductor of the award-winning Black Chorus at the University of Illinois. Davis, who has performed at Carnegie Hall and has four CDs, said she hails from the coalfields of West Virginia and drew inspiration from African American opera singer Marian Anderson’s famous 1939 Easter morning, Lincoln Memorial concert.

“Ms. Anderson, whose voice was herald as one that comes around once in a hundred years, used her moment, although pained by injustice, she used her defining moment as a platform to stand for justice,” Davis said. “Through her singing, she confronted injustice. With closed eyes, she looked America straight in the eye with her voice and disarmed a nation.”

The event also featured performances by Sisters In Song Community Choir, formerly known as the MLK Women’s Mass Choir, gospel artist Curtis Eubanks, and SistaStrings, a Milwaukee-based sister duo that combines classical backgrounds with R&B with a touch of gospel influence. Museum and archival items were on display including a new exhibit on Women’s’ Suffrage titled “We Stand on their Shoulders: A History of Wisconsin Women & Voting.”

Gov. Tony Evers presented the MLK Heritage Award to the Rev. Willie Brisco, who is currently working with the governor and others to reform Wisconsin’s correctional system. Evers also handed another MLK Heritage Award to Corinda Rainey-Moore, a mental health professional in Dane County and advocate, for her work empowering people who suffer from mental illness.

“Just like Dr. King, service is who I am and it’s the price we pay for being here on earth,” said Rainey-Moore shortly after receiving the award. “We also know that for our kids, if they can’t see it, they won’t believe it. So, we have to be there for our youth so that they can know that they can be all that they can be.”