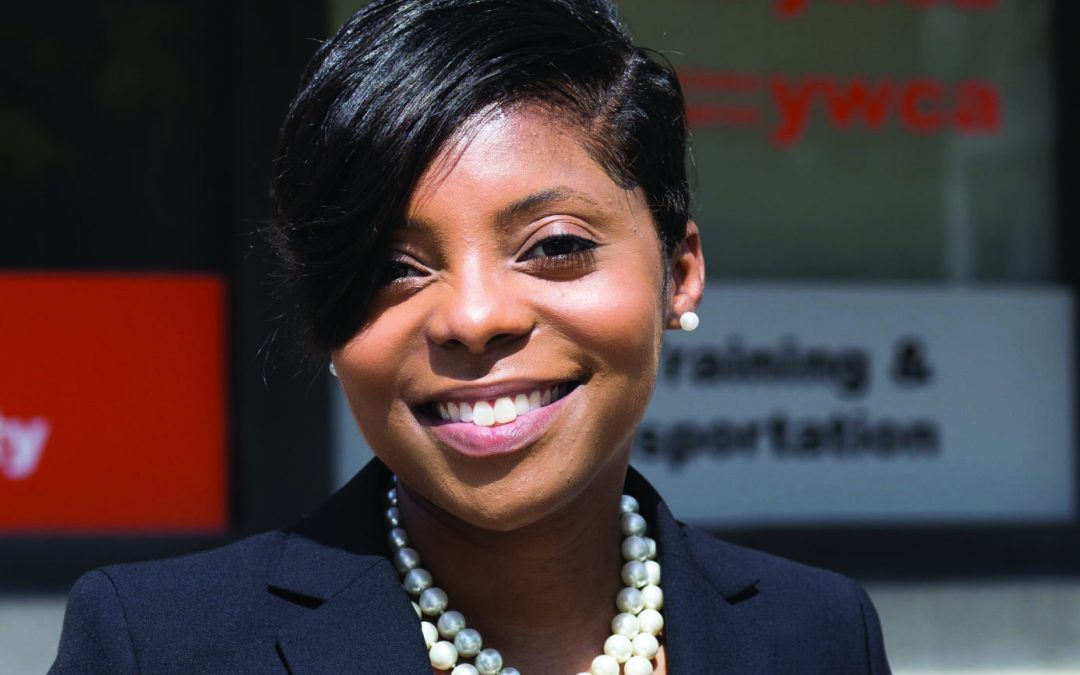 Vanessa McDowell is a warrior in the arena of civil rights. And when she speaks, she grabs you by the scruff of the neck and doesn’t let go. Armed with the breastplate of faith, she remains steadfast in her values, morals and unshakable fight for justice and equality.

The Madison native and CEO of YWCA Madison, McDowell epitomizes what the new generation of civil rights activist resembles. Becoming the first woman of color to lead the organization in its 109-year history, she took the helm two years ago and embraced the challenges with courage and vigor.

“I have a heart for people and the voiceless,” said McDowell in an interview from her Capitol Square office. “My passion is helping those who are marginalized, and look like me. I’m very passionate about my people, to be honest, and all the injustices that we face.”

That uncompromising attitude may have first sprouted roots while she was a sophomore at the University of Wisconsin-Madison. McDowell was a student worker in the chancellor’s office when she said overt racism reared its ugly head.

A notice of cutbacks went out to the students of color, saying in so many words that they needed to find work elsewhere. But when the Black students had to train the white students on the top floor how to do their jobs, word spread that someone was being hired amid the job eliminations. It was a sister to one of the white students.

“She told me that they ‘like to keep it in the family,’” McDowell said the college worker told her. “That little fire in me that I didn’t know I had erupted. I was furious.”

Righting a wrong was necessary. McDowell spoke up and before she knew it, she was working on the top floor.

“You can only image how quickly I became the ‘black girl who causes problems’ and how toxic that environment was,” said McDowell. “That was a defining moment for me. It sparked something inside of me I didn’t know was there.

“I knew right then and there that I was going to do something with fighting for my people and the injustices that we face.  I just didn’t know what it looked like,” she added, emphasizing that racism is embedded in the university’s history.

She went on earning a sociology degree from UW-Madison, before accepting the position of special assistant to the pastor at Mt. Zion Baptist Church for nine years, which proved to be a great experience for the up and coming executive.  It put her on the frontlines of social work in Madison’s African American community.

McDowell cultivated that experience into a nonprofit leadership career at the YWCA, initially as director of support services, then chief programs officer. In January 2017, she became interim CEO following the leadership departure of CEO Rachel Krinsky. That summer she made history when selected as the organization’s first African American in the top seat since being founded in 1908.

“In communities of color, the YWCA has always been known as the white women’s organization,” McDowell said. “I knew that when I was going to take this mantle that it was going to be a heavy one. It wasn’t so much a celebration of being the first, but more of a revelation that it took 108 years. To me that meant there’s a lot of things embedded in its history that need to be uncovered and dismantled.”

The YWCA offers housing, transportation and job training services for low-income families, while seeking to combat racism and empower women. They also help women fleeing domestic violence, among other things.

An active member of the Madison Alumnae Chapter of the Delta Sigma Theta Sorority, where she serves as the chaplain, McDowell also plays bass guitar for Madison concerts and events. If that isn’t enough, she’s a DJ on the side.

McDowell carries on a legacy paved by her parents, Charles and Candace McDowell — both UW-Madison alumni and trailblazers in their own rights. Her mother is the founding director of the university’s Multicultural Student Center, which she lead for 22 years. Charles McDowell served as president of the Wisconsin Alumni Association from 2003-04.

Both were beamed with pride when their daughter, one of a group of African American community leaders in attendance for a press conference to drive 2020 Census participation, gave an impactful speech.

“That’s right!” someone shouted in support. “Amen, amen,” another said.

McDowell easily laughs when she thinks about how she initially thought about becoming a pediatrician when she grew up, but that dream fell to the wayside. She shadowed a doctor one high school summer and couldn’t stomach some of the illness and disease she was seeing.

Leaning on her favorite bible scripture, Matthew 25: 21, she works to heal hurting communities and stand for justice. The verse reads in part: “Well done, good and faithful servant! You have been faithful with a few things; I will put you in charge of many things. Enter into the joy of your master!”