by Courtesy of the University of Wisconsin-Madison, By Doug Erickson | May 12, 2022 | Community Profile & Events | 0 comments 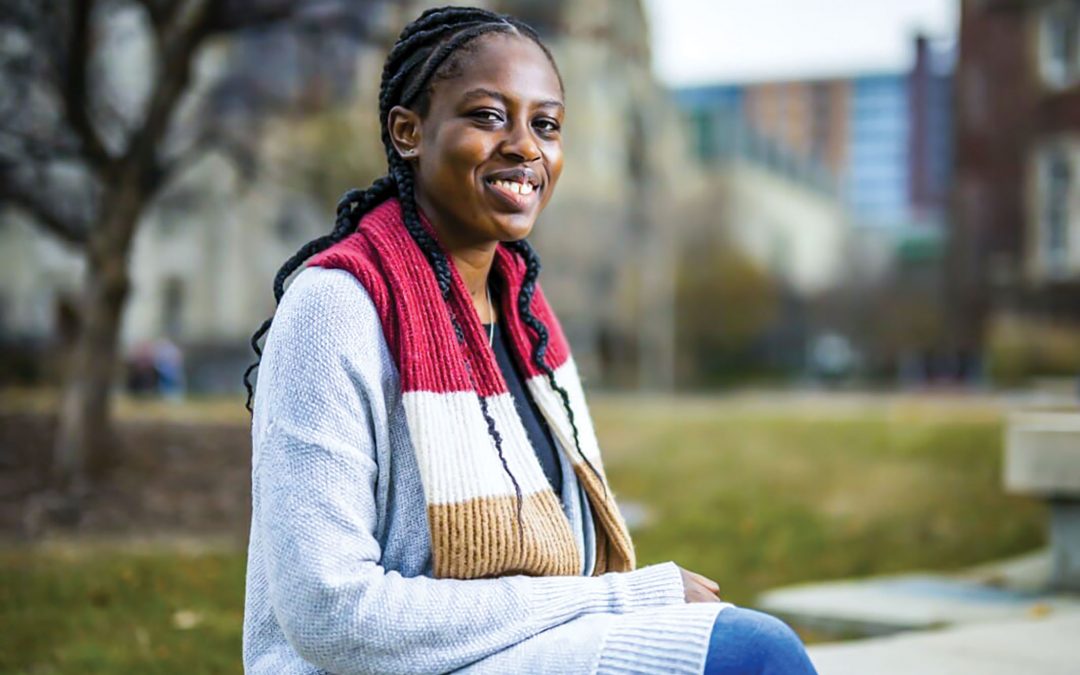 One of Country’s Top Undergraduate Honors

Lydia Nyachieo’s interest in global affairs expanded in bits and pieces growing up. At University of Wisconsin–Madison, it became her academic passion.

“I’m especially interested in — and puzzled by — the incomprehensible imbalances of wealth and power,” says Nyachieo, a senior majoring in international studies and philosophy, with certificates in African studies and French. “How is it that communities in one part of the world sometimes thrive at the direct expense of people in another?”

Nyachieo, of Madison, Wisconsin, will be able to delve deeper into that question and many others as the winner of a prestigious Marshall Scholarship.

Established in 1953, the Marshall Scholarship Program gives high achieving U.S. students the opportunity to study at the graduate level at any university in the United Kingdom. The program was created to honor the ideals of the Marshall Plan and to foster appreciation of the U.K. among future U.S. leaders. Up to 50 scholarships are awarded each year; there are 41 winners in the 2022 class of Marshall Scholars.

“Marshall Scholars are considered among the top undergraduate university students in the United States,” says Provost Karl Scholz. “The competition is intense and the selection process long and rigorous. This is a tremendous honor for Lydia, and we’re thrilled as a university to be playing a role in her education and in helping to launch what will surely be an impressive career.”

Nyachieo intends to use the scholarship to earn a master’s degree in international development through the Global Development Institute at the University of Manchester.

“Its master’s program covers a broad field of issues that I’m most interested in: poverty and inequality, governance and management, the global political economy, and the environment,” Nyachieo says. “I also like how the Global Development Institute takes a critical, inclusive and action-oriented look at global development, where development isn’t the ‘Global North’ helping or teaching the ‘Global South,’ but rather seeing how all countries can improve in ways that contribute toward a more equitable and sustainable world.”

Growing up in Madison, Nyachieo absorbed bits of African history, culture and language from her mother, a native of West Africa. At Madison East High School, Nyachieo learned of the varied legacies of the colonial era and became fascinated by the topic.

“By the time I got to UW–Madison, I already was very interested in issues happening throughout the world,” Nyachieo says. “In my classes here, my focus has become even more outward-looking.”

Nyachieo serves as an editor and staff writer for The Wisconsin International Review, an undergraduate magazine. She is the recipient of the prestigious Newman Family Scholarship, given to the most promising undergraduate students studying global affairs.

In summer 2021, Nyachieo completed a remote internship with the Associated Center for Agro-based Development in Malawi, an organization that provides financing and other support for smallholder youth farmers.

“By the time I got to UW–Madison, I already was very interested in issues happening throughout the world,” Nyachieo says. “In my classes here, my focus has become even more outward-looking.”

Nyachieo is part of UW–Madison’s Precollege Enrichment Opportunity Program for Learning Excellence (PEOPLE), through which she earned a four-year, full-tuition scholarship. She helps ensure that her fellow students have the support they need to thrive in college by serving as a tutor and mentor for the Center for Academic Excellence, which provides an inclusive community and academic support for students who have been historically underrepresented in higher education. She’s also been a very active member of St. Paul’s Catholic Student Center and Madison Public Philosophy, a local philosophy outreach group.

Gay Seidman, Martindale-Bascom Professor of Sociology, characterizes Nyachieo as one of the most promising young adults she has encountered in her 30-year career at UW–Madison.

“Lydia is a truly remarkable student: thoughtful, curious, insightful,” says Seidman, Nyachieo’s senior thesis advisor. “The Marshall fellowship will make a real difference in her career path, and I am delighted that the committee has recognized her potential. I have no doubt that she will go on to make significant contributions to academia, and to the world at large.”