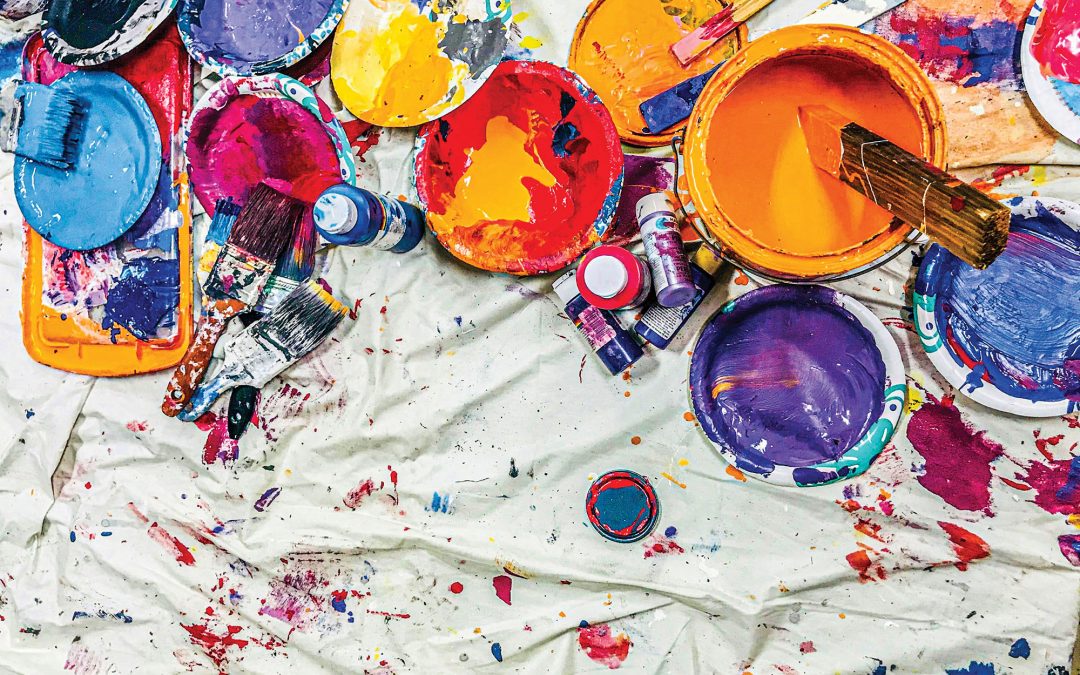 Art has always been a key piece in the rich storytelling of the Black experience.

This year, as UMOJA and Ashro discussed ways to partner in support of the Black community, a great opportunity presented itself: to seek out and celebrate artistic expression during a time that’s been wrought with emotion and upheaval. It was against this backdrop that The Onward & Upward Artist Showcase was born. For its first year, the theme was timely and inspiring—The Black Experience: Empowerment and Gratitude. UMOJA and Ashro saw this contest as a powerful way to celebrate Black heritage and culture…and to reach out to artists, aspiring or established, who have something important to say.

Be you — The thing that inspired me was the lack of positivity in today society, I choose to take all the positive things and make them into something beautiful.

Untitled. Brown #3 — This painting is third in a series entitled “Brown” that I’m working on. All of the pieces are monochromatic with different shades of our brown skin tone and feature a colorful head wrap representing our continued ties to African culture. Facebook & Instagram @bohemianblackart and website: bohemianblackart.com.

Sharon L. Bjyrd is best known for her vibrant portraits celebrating the beauty and diversity of the black experience. “I seek to honor the individuality of people of color and to depict the different ways we go about expressing our blackness.”

Sharon was born and raised on the South Side of Chicago, moving to Madison in the early 90’s. She attended the University of Wisconsin, Madison, studying Social Work and Afro American studies and went on to work in the domestic violence field and serving women in poverty at organizations like the YWCA of Madison and the Wisconsin Coalition Against Domestic Violence. Self-taught, with a few classes along the way, Sharon entered the art world as a second passion after a life slowdown due to Lupus and sickle cell disease created the space to re-discover her love of art in the form of painting. Her medium of choice is acrylic paint, though she’s known to dabble in mixed media.

Sharon’s work has been featured: in the book “Let’s Talk About It, The Art, The Artists and The Racial Justice Movement on Madison’s State Street” 2021; as a mural at Madison Museum of Contemporary Art during the George Floyd riots 2020; “Bohemian Black” solo exhibit, Roberta Gallery, UW-Whitewater 2020; as an emerging artist at MMOCA ‘s Art Fair on the Square 2019; “Flowers in the Garden Exhibit” The South Side Community Art Center 2019, Chicago; Hatch Art House, Madison, WI and the Silver Room Block Party 100 Canvas Event in Chicago. She is currently one of four artists in the BridgeWork art accelerator program at Art Lit Lab in Madison.

Voice To The Voiceless — After the March On Washington in 1963. The Poor People’s March in 1965. The assassination of Malcolm X in 1965, and Martin Luther King in 1968, it took me a while to embrace todays social movement that’s been stirring restlessly for the last six years to express itself under the banner of Black Live Matter (BLM).

The murder of George Floyd by police triggered my instincts to become engaged and to create an image that gives voice to the voiceless. I painted people of all ages, gender and races together for a common purpose as a memorial to those whose lives were taken away senselessly, and whose voice would be heard endlessly!

Born and raised in New York, Joseph Randall began his advertising career at the Manhattan- based McCaffrey & McCall agency.  He worked in the “bull- pen” putting together ads and storyboards by day, and studying at The School of Visual Arts at night.

During his seven years there, Randall imbibed the spirit of McCaffrey & McCall and became an art director, working on accounts such as Hartford Insurance, Pfizer’s Ben-Gay and St. Joseph’s products (aspirin and cough syrup), and Norelco Products (Cassettes, Coffee Makers and Electric  Shavers).

A respected agency known for its ethical outspokenness and creative risk-taking, McCaffrey & McCall advocated for various social causes. For example, it developed “Schoolhouse Rock,” a children’s animated educational TV series. It also joined other New York agencies to create ads for an “Unsell the War” campaign which opposed the war in Vietnam.

He demonstrated this when he created campaigns that boasted “A ‘Gotcha!’ moment for Norelco”; celebrated “A Mind Growing…” career in the U.S. Navy”; serenaded the ‘Street Song’ you drink  in a bottle of Coca Cola; promised “that Breed Apart” prosperity symbolized by the Merrill Lynch bull; styled “A Range of Options” offered by upscale Jenn-Air kitchen appliance systems; and globally shared “Nature’s Secret To  Healthy Hair” in ORS Olive Oil products by Namaste Laboratories.

After years of working in advertising agencies Randall became an award-winning creative, creating memorable print and tv messages for clients like; Norelco, Coca-Cola, Merrill-Lynch, and Jenn-Air. In 2008, he decided to hone my skill as an artist and incorporate my conceptual thinking from advertising and applied it to his artwork. He called it visual racontuer, which is essentially what he did each and every time he plotted out drawings in storyboard formats to create :60 or :30 second TV commercials.

In August of 2008, a friend asked Randall to create a painting for her dining room, he did it and created a hauntingly beautiful of painting of Caribbean women. But, in so doing, he was also miraculously inspired to create artwork for himself, for his enjoyment, instead of clients. He realized his creative practice had expanded from ads to art. Having previously worked in oils, he ventured into mixed-media: dry pastel chalk, colored pencils and acrylics.

During the months subsequent to that epiphany, Randall was inspired to create a prodigious amount of work which reflected his interests in Cuban culture, Music, Celebrated icons, Caribbean life, and Black women. Drawing the attention of a gallery owner, on February 10, 2011 had his first one-man showing of 34 works of art called  From Ads2Art: The Transformation of Joseph C. Randall.”

“My senses of observation and spiritual guidance compel me to create the images I paint. Watching people of all walks display themselves, either alone or within a crowd, renders their personae as ever-present to me, whether they are known or unknown, famous or obscure.

My paintings, as stories, interweave the symbolic meanings of the subjects eyes, faces, hands, bodies, the ways they clothe themselves and the representational spaces in which I find them or imagine them to live.

Contemplation of these symbolic meanings enables me to capture their spiritual, emotional and experiential aspects which inform the story being told.  In this way, each character I paint tells a story, much like an actor in a play, providing content, and evoking onlooker reflection and engagement.”

The Bridges Ruby Crossed — In 2020, while my mother was in surgery at Mayo clinic, I decided to honor the living social justice heroes through art. Ruby Nell Bridges Hall is an American civil rights activist. She was the first black child to desegregate the all-white William Frantz Elementary School in Louisiana during the New Orleans school desegregation crisis in 1960. I painted this to share her story. This piece that has shipped to the MET and is on display at Brown University.

This is a painting of me and my husband. It is his 50th birthday and I wanted to represent us as a powerful black couple. He is incarcerated but we are strong.

Rest Day — Sunsets are many times very colorful—they can be connected to peace or relaxation. For enslaved people, specifically for Africans enslaved in US during the 17th-19th centuries this may have never been something experienced. I painted this piece of work as protest of the enslavement of African people who never had a “rest day” to lay in the field amongst the fruits of their labor and allow their body to rest. It can be viewed as what their heaven might be like.

Fractured Emotions — “Expressing emotions have been a struggle of mine my whole life, being a black man in America I feel that being able to showcase not just my emotions that I have built up through all these unfortunate events in recent history, but also represent everyone else’s emotions around me too. Through the years many people including me and my father have battled with discrimination. Creating this piece was to help people understand that letting emotions out is nothing to be afraid of.

“Fractured Emotions” is a 36×48” charcoal piece that’s made up of 20 different pieces of paper that are manipulated by rips, stitched together by black thread. I was inspired to do this piece because during Covid-19 there were many events that took place and caused many different emotions to go through my body, but I had no way of expressing them other than art. I wanted these emotions to impact viewers to relate to this piece, to understand that it’s okay to express emotions, and to see that everyone goes through them at some point but it never has to be alone.”

My submission was inspired by my own experience with pregnancy and motherhood. It is a self portrait and image of self reflection and confusion with my present body and mind. Motherhood can effect us in many ways but for myself I felt trapped and embarrassed in my own skin. Letting go of our past self and showing our new self acceptance is something I’ve struggled with so portraying it on paper is part of my healing. Done in charcoal and graphite.

“Cliff Joseph” — “I’m currently in Grad School receiving my Masters in Art Therapy. I wanted to look up former Art therapist from my cultural background for encouragement and Inspiration. Cliff Joseph is definitely and example of Black Excellence!”