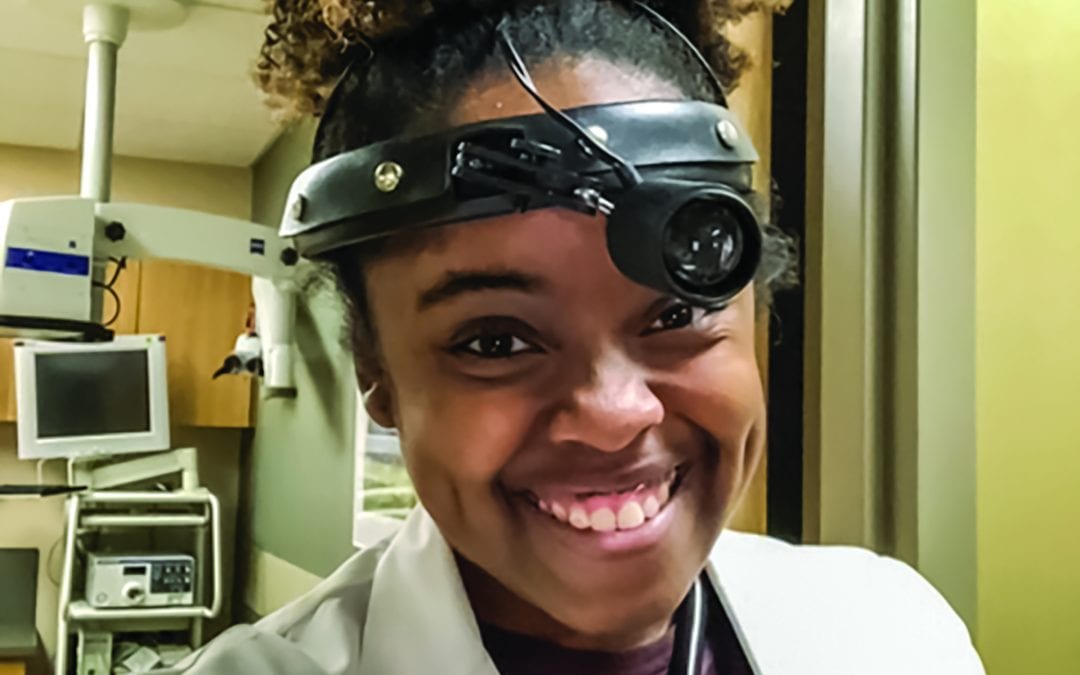 A Long, Rewarding Journey for a Madisonian

Dr. India Anderson-Carter’s life path has come full circle. The Madison native who used to play doctor with her toy medicine kit as a child, graduated this spring from the University of Wisconsin-Madison with a doctoral degree. Equally exciting for Anderson-Carter is that she will be conducting part of her residency in obstetrics and gynecology at the hospital where she was born.

“A portion of my residency will be at Meriter Hospital,” Anderson-Carter said. “I’ll get to deliver babies there. … I like surgery and I like to use my hands. So, I like that obstetrics gives me a good mix of surgery and longitudinal care.”

Anderson-Carter’s journey to pursuing a medical profession started early. When anyone would ask her what she wanted to be when she grew up, replying “a doctor” came natural.  As a child, she made frequent trips to the pediatrician’s office because she battled severe allergies and chronic asthma. In elementary school, she recalled the time she had to be resuscitated because her heart stopped beating during a severe asthma attack.

“It wasn’t until middle school when I really knew I wanted to become a physician because of the role my pediatrician played in my life,” Anderson-Carter said. “My pediatrician really taught me how to live with asthma. He also helped me see that regardless of my health ailments, I could live and lead a fairly normal life and not feel different from other kids.

“It was his role in my life that sparked that fire in me wanting to become a doctor,” she added.

A 2011 graduate of James Madison Memorial High School, she furthered her education by earning Bachelor of Science degrees in biology and Spanish, before entering medical school. In 2015, while interviewing with medical schools, Anderson-Carter lost her grandmother, who she credits with helping raise her and her three siblings.

The loss dealt a crushing blow to Anderson-Carter’s future dreams.

Endometrial cancer lead to her grandmother’s death. Anderson-Carter, in memory of the woman she cherished, is dedicating her life to women’s health.

“She was an integral part of watching me grow up,” Anderson-Carter said of her grandmother Julia Anderson. “She was one of the first to really push me and say ‘I can’t wait for you to be a doctor so you can come and take care of me some day.’ I grappled with the loss for some time. … A lot of my will and determination to go forth with medical school, and finish, was centered on what her hopes were for me.”

In early March, COVID-19 spread across the United States and with it came new social distancing guidelines. Large gatherings, like Match Day, where fourth-year medical students find out where they will do their residency training, were cancelled out of concern for the safety of those attending. Instead of ripping envelopes with fellow classmates, students opened email messages from the Match.

For Anderson-Carter, the major milestone was no less momentous or jubilant. Celebrating at home surrounded by her family, she beams confidently, anticipating the long-awaited transition from medical school to embark on the next stage of her career. An urn with her grandmother’s ashes were there, too.

On June 16, she will begin her residency which will be split between UnityPoint Health – Meriter Hospital and University of Wisconsin Hospitals.

“One of the things that attracts me into this field is the idea that you’re bringing new life into the world,” said 27-year-old Anderson-Carter. “I don’t think there is anything more magical than that.”