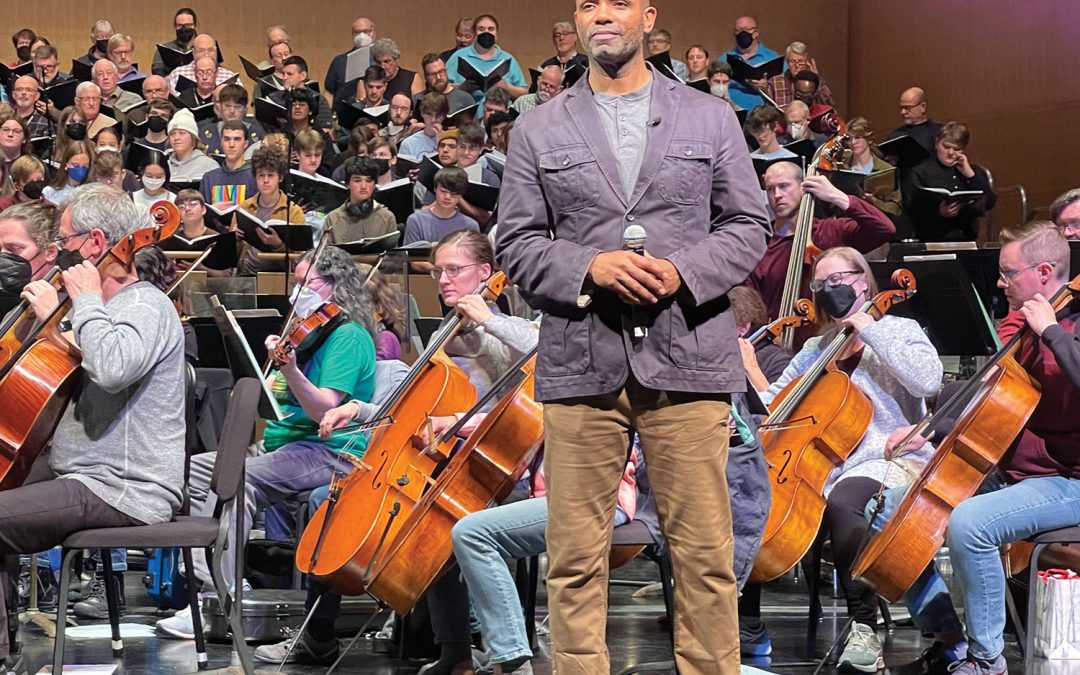 Nathaniel Stampley made his Madison Symphony Orchestra debut this winter to an appreciative audience. The Milwaukee native is a graduate of the University of Wisconsin-Madison where he earned his Bachelor’s of Music degree.  He is an award-winning artist with a long list of accomplishments including performing on Broadway in the production of CATS, Porgy and Bess, The Color Purple and The Lion King, in addition to playing Mufasa in the Disney U.K.’s run of The Lion King; and in Off-Broadway productions.  He has received numerous awards and honors for his work in the regional performances of The Bridges of Madison County, Man of La Mancha (Joseph Jefferson Award), Porgy and Bess, and other productions.  His vocal performances include concerts and recordings at numerous locations, including Lincoln Center and Carnegie Hall.

He is an Artistic Associate at the Milwaukee Repertory Theater and a Lunt-Fontanne Fellow awarded by the Ten Chimney’s Foundation with master teacher and mentor Phylicia Rashad.  He lives on the east coast with his wife,Lanette Costas, and their two children.

UMOJA visited with Stampley at the Overture Center for the Arts after his final performance as guest baritone in A Madison Symphony Christmas.

UMOJA: We were honored to experience your debut performance with the Madison Symphony Orchestra.  How does it feel to be back in Madison?

Stampley: “It’s great! Madison is my second home in Wisconsin.  I grew up a Milwaukee kid, but I got my musical training in Madison.

He explained that as a youth growing up in Milwaukee, he would come to Madison repeatedly for summer music camps, for sporting events, for honors choir performances and eventually to enroll for formal study at the University of Wisconsin’s School of Music, citing the support of his teachers, mentors as instrumental.

“(This debut has) been 30 years in the making!  I am amazed and delighted to be here among friends and family, Maestro DeMain, talented musicians of Madison Symphony Orchestra, the choirs and so grateful for the training I received at UW.”

UMOJA:  Let’s talk about your life as a performing artist. You have a rich career and are accomplished in so many areas:  Broadway star, vocal artist, award-winning stage actor, director, television actor and voice artist.  How does it all fit together?  Where did it start?

Stampley : They are all connected.  When someone asks me “When did you start singing?” I reply: “I don’t remember when I ever wasn’t singing!”

I grew up in a Pentecostal church, the oldest of six children and a member of the youth choir.  My father was a pastor and my mother was a church musician.  She is an amazing singer and a great musician.

“From Day One I’ve been hearing gospel music and trying to sing as well as my mom – even to this day.”

Gospel music is about the feeling about your relationship with God and the gospel – and those stories are a known thing.  But in order to be a performer singing genres outside of gospel, like in musical theater or even opera — where you’re singing other people’s stories and trying to walk in their shoes — you have to act!

UMOJA: When did the performing bug bite you?

Stampley: The first show I was ever in was an elementary school production called The Most Amazing Snowman.

And I bombed – I mean really bombed – but there was something about being in front of everyone, and even looking at my friends pointing and laughing at me because I was so bad — that was exciting and thrilling.  And I remember that feeling.

I had always been comfortable singing in front of people because of Church congregations, but the context outside of church was something new and different.  So I did musicals when I was in High School and even did my first professional work was while I was still a student in High School.

Whitefish Bay High School had such a great music program.  From there my chorale director, Randy Swiggum, urged me to UW for classical music training  …and then it took off.

UMOJA: And now you have a rich and rewarding career, but a career in the performing arts can be a tough road.  How do you stay resilient?

Stampley: Yes, it can be.  What people see in show business or entertainment is all the successes. That’s all people see.  You have no idea of how many times we’ve been given the word ‘no’ and had it thrown back at us.

You have to have tenacity. I always share with younger people:  “If I can convince you to not pursue this business, then it’s not for you.”  But if you’re not convinced to stop, then maybe there’s something there.

And even with tenacity, there has to be talent and support.  And I’m grateful that I’ve always had support.   My family is still my biggest support system that I have to this day.

UMOJA: What advice to you have for youth and those aspiring to make the journey in the arts?

Stampley: It’s important to set goals for yourself – some short term and some further out.  But it’s important to reach further than what’s within your grasp at the moment.

For example, the only way an athlete can break a record or make history is if they train, train, and then train a little bit more so that they’re ready and prepared for when the moment comes.

You need to rid yourself of old ideas, past bad experiences and even failures, because you want to get past that point of “what you used to do” or used to be,” so that when the moment comes, you are prepared to do something extraordinary — something you didn’t even know you were capable of.

UMOJA: Your work has the ability to touch and impact audiences in so many ways.  What’s it like for you – as the performer – when you are in your ‘sweet spot’?

Stampley: (Smiles) It’s not an “every performance” kind of thing, but there are times when the divine and the secular are right there in alignment (and that is wonderful).

You’ve got to realize that there is a dynamic between the performer and the audience.  The theater is a shared space and in order for special moments to happen, audiences are equally a part of the equation as a partner.  Sometimes they’re just swept up into the moment — and you dream for those moments.

UMOJA: How did your roots in Wisconsin and growing up in Milwaukee prepare you for life in the theater?

Stampley: (Laughs and describes life in New York City.)  We (Midwesterners) lead with kindness and niceness.  And I still have a lot of that in me and I hope I never lose it!

So many people have been so nice and wonderful to me; I know I’ve had doors open for me in ways that I may not ever fully understand because of a good reputation – or maybe it’s something I’ve done nice for someone — maybe down the line it has paid off in ways I may not ever really know about, and that’s fine. And so, because of that, I try to extend that same grace and kindness to other people as well.

UMOJA: On your website, you have an entire page entitled “Nate’s GRATEs” filled with the names of people who have had tremendous impact in your life.  Tell us more about that.

Stampley: I hope folks get to know who these incredible people are.  There’s this great quote my father always shared from John S. Mbiti:  “I am because we are, since we are therefore I am. “