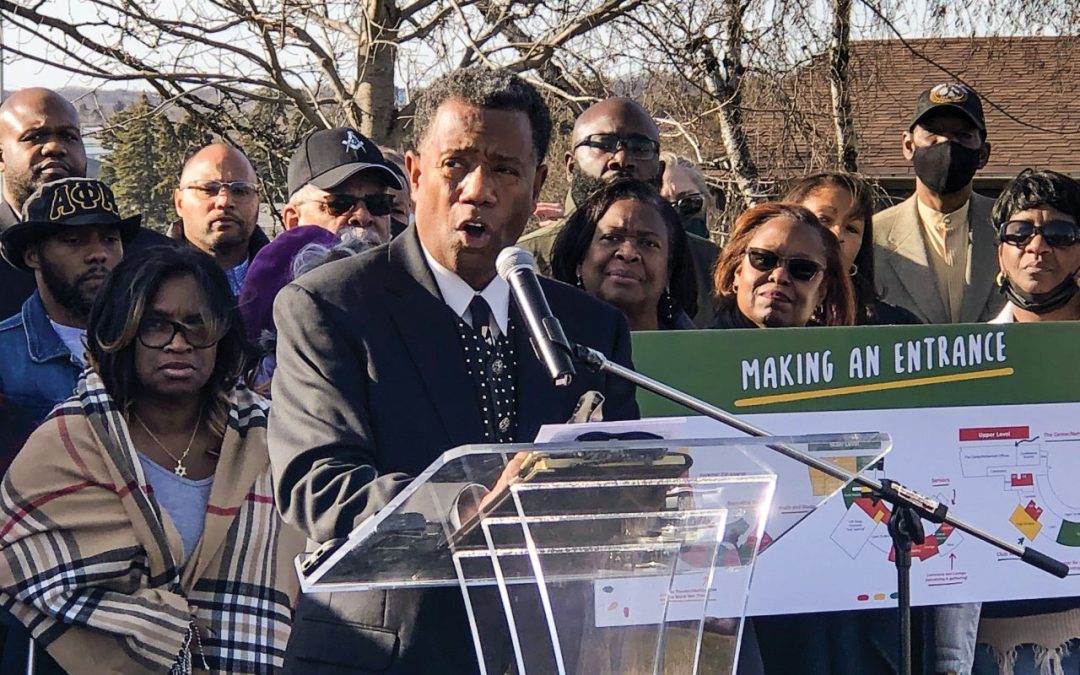 A Vision Coming to Fruition

For over 30 years, Rev. Dr. Alex Gee sought meaningful solutions for the Black community for his native city of Madison. The Center for Black Excellence and Culture is his vision – and the community’s conduit – for challenging structures that impede diversity and sustained Black advancement.

The Center is Black inspired.  It’s Black designed. And it will be Black led.

“The Center isn’t a program,” said Gee, Nehemiah Center of Urban Leadership. “It is a solution. A Black-designed solution that will use cultural expression, history, innovation, and leadership development to inoculate ourselves against the stress and cultural isolation that’s killing us and our aspiration.  We members of the Black Community, stand in solidarity to say, ‘We need this now.’ This is our moment. This is a transformational moment.”

Under a crisp blue winter sky, on the city’s southside, Gee unveiled the $38 million Center enveloped by community members in full support of his vision. Called a first-of-its kind, the Center is slated to sit on six-acres, overlooking the Beltline Highway, adjacent to the biomedical corridor that leads to the University of Wisconsin. The 65,000-square-foot, three-level facility, is just west of the Fountain of Life Covenant Church, where Gee presides as senior pastor.

Scheduled to open in late 2023, the Center will be adorned with state-of-the-arts theaters, youth space, innovation space, networking and meeting space, educational space, conference rooms, kitchens, offices, inside lounges, outside terraces, makers space, media rooms, exercise space, space for Black elders and Black children ꟷ and those in between, he said.

“I am grateful for the hundreds of Black influencers who participated in focus groups in order to speak into, and affirm, this vision,” Gee smiled. “Medical professionals, educators, elders, professors, parents, Madison-born-Blacks, formerly incarcerated individuals, artists, historians, students, youth, human services, and business professionals. Thank you to the hundreds of Black donors. And thank you for the Black Madison trailblazers, past and present, who worked tirelessly, and against all odds, to make this community great and accessible for everyone. We stand on your shoulders and endeavor to make you proud.”

Summit Credit Union CEO and president Kim Sponem presented Gee with a $2 million donation towards the Center ꟷ  the largest donation in the history of Summit. In February, Gov. Tony Evers announced that the Center will receive a $5 million grant towards capital development and building groundbreaking.

“The impact of this Center will be regional as it will brim with the stories of the history making of Black innovation and innovators from all over Wisconsin,” Gee said.