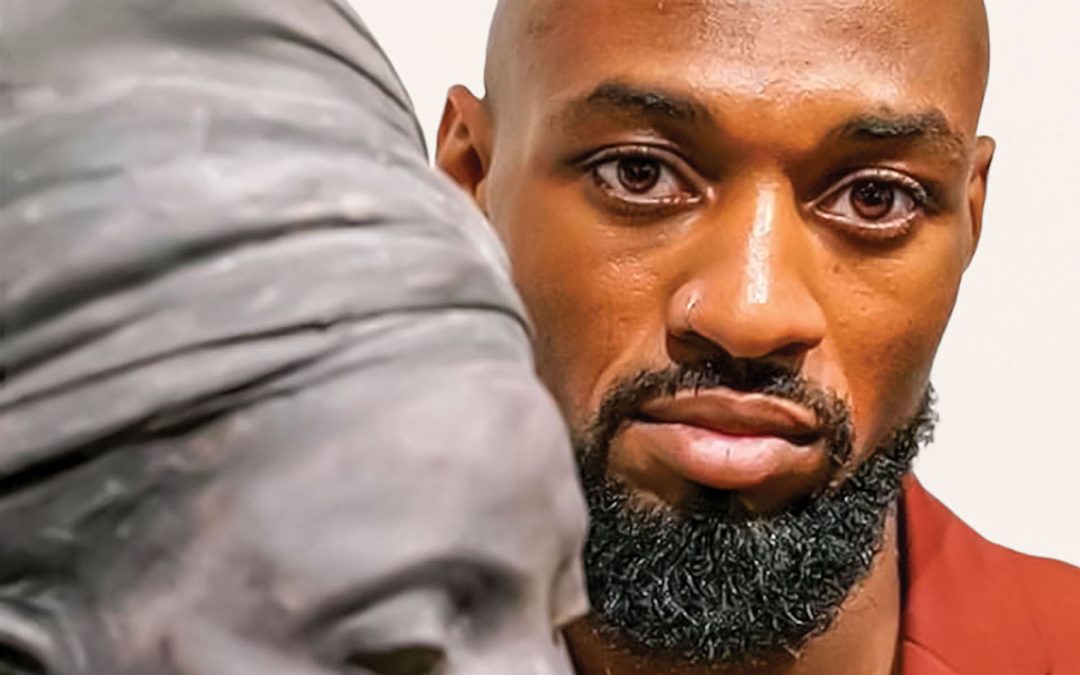 Dirty. Funky. Useless. Those were the initial thoughts Austen Brantley possessed when he first touched blob of clay.  If he had his way, he would have put on gloves.  The Detroit native signed up for a high school ceramics class to get “an easy A” and boost his low GPA. The assignment called for making pinch pots. Yet, something inside him pushed him to create an eye instead. And then another eye. A nose and mouth followed.

He was holding a face. Surprised, he gave it another try. He sculpted another strong face. The art teacher, grabbed it, smashed the two creations, and demanded Brantley stick to the given assignment. It was in that moment, that oneness with clay, that changed his life forever. The awkwardly shy junior said molding clay was freeing and spurred a sense of belonging.

By the time the school year ended, he’d created 30 sculptures and an honorable mention award from a local arts college. When senior year rolled around, he had turned his dad’s office into a sculpting studio and began creating beautiful pieces of art daily. By 19, his sculptures were on display in art galleries and museums.

Nowadays, Brantley is taking the art world by storm. At just 26, the intricacy of his work and its quiet profundity has been critiqued and admired worldwide. His art has appeared in institutions ranging from the Detroit Institute of Arts to the National Afro-American Museum and Cultural Center in Wilberforce, Ohio. The artist’s work is also on permanent display at Detroit’s Viola Liuzzo Playground, where he was commissioned to create a statue of the playground’s namesake, a murdered civil rights activist.

The soaring sculptor stopped in Madison earlier this year to showcase his solo exhibit at the Truax Campus of Madison College. The sculpture series titled “Course” invites attendees to look at the systematic racism and stereotypes connected to the textures and styles of African American hair and to consider the preferential treatment of straight hair as evidence of social barriers and biases against Black Americans.

Brantley said his art reflects his surroundings and circumstances. Moreover, he sees beauty in the undesirable.

“I created all of these pieces in seven or eight weeks,” Brantley said. “The work has a resemblance of emotional scars. Just like the people from my hometown — my friends, my family members and myself included — I try to kind of capture that and imbue it into my work. My work is about emotional content. It’s about taking something that could be taken for granted, and then giving it a unique perspective or a different light.”

The exhibit features a series of 15 new pieces of artwork in ceramic clay, which Brantley completed in eight weeks. Using a ceramic glaze technique, along with acrylic paint, terra cotta and wax, the socially conscious artist said he hopes those viewing his art will recognize the connection of Black hair and its collective traumas and other cultural experiences. Some of his work includes self-portraits, dreadlocks cut from Brantley’s hair, and an Ivory Coast African doll from his travels embedded and baked into one of his pieces.

His influencers include Auguste Rodin, famed French sculptor of The Thinker; Italian artist, Gian Lorenzo Bernini, credited with creating the Baroque style of sculpture; and Michelangelo. Brantley said his art is “quiet.” His creations aim to depict Blackness both nationally and globally, intermingling with one another as he explores identity throughout the diaspora.

“A lot of my work is about my identity,” he said. “Because I don’t feel like I’ve always had one. I always feel like I’m creating one.”

No longer a student but a master at his craft, Brantley laughs at the thought of how much he initially despised the touch or smell of clay. Now, like a scent of a lover that lingers in the heart, he craves being near it and of it.

The self-taught clay sculptor said his ceramics schoolteacher at Berkley High School in Berkley, Michigan became one of his biggest supporters and mentors. He showed the aspiring artist the basics to blossom his hidden talent. He would eventually tell Brantley that his rebellious spirit to mold faces instead of clay pots was an early indication that he possessed the heart of an artist. The memory is embedded in the young artist’s heart.

One day, when his ceramics teacher was out sick, Bentley came to art class to find much of his work destroyed.

“The heads were broken off,” he recalled. “The noses were broken off. Carrots were put into the holes of the eyes of my sculptures. I don’t know who did it, but I was so angry that I went to the bathroom to calm myself. I looked into the mirror and then I told myself that they may be able to break my pieces, but they can never break me.”

To learn more information about Brantley and upcoming exhibitions, check out his website: austenbrantleysculpture.com.