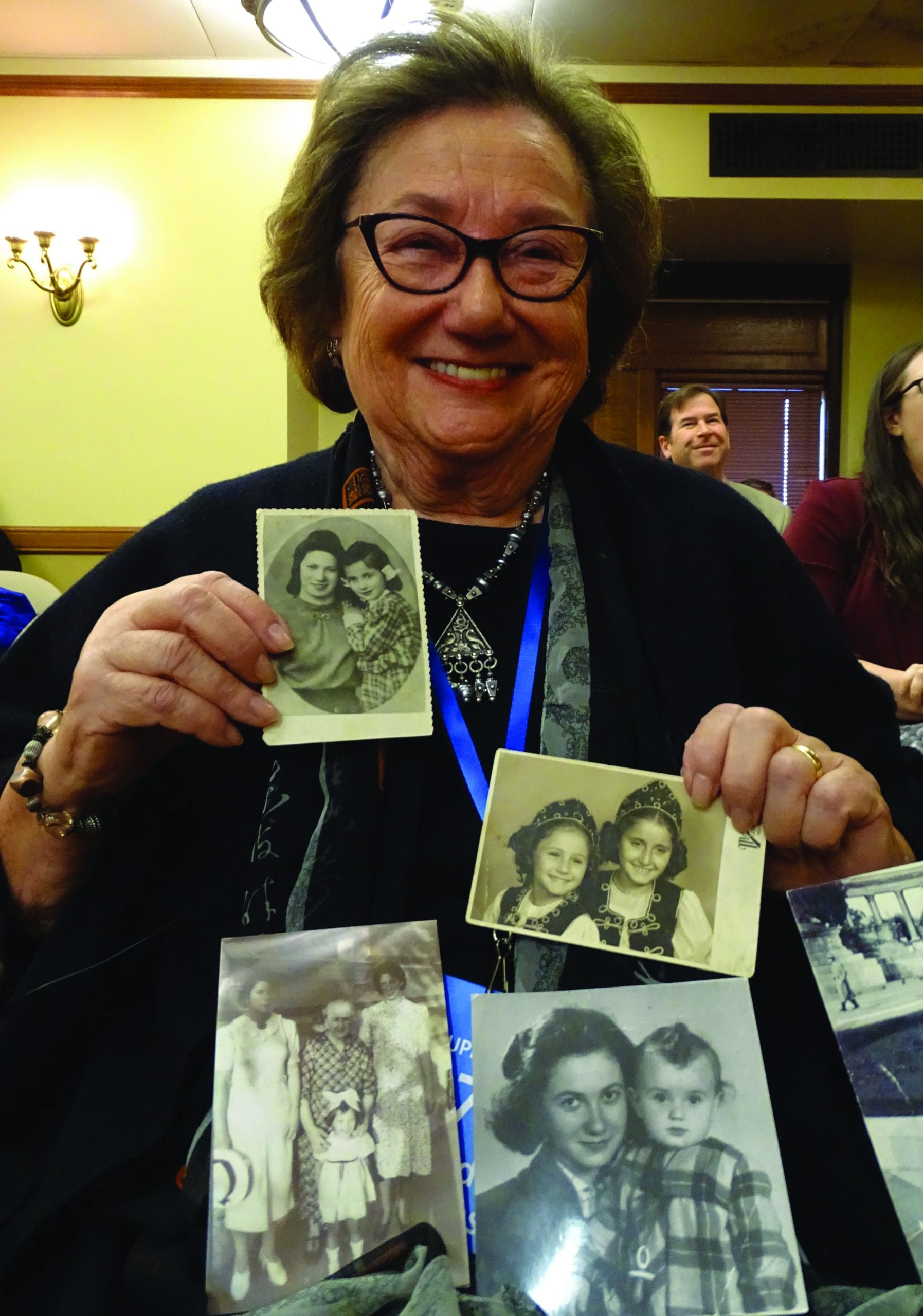 Eva Klein Zaret sat before legislators in a packed committee room with a manila envelope clutched in her hands and a lapel pin on her black sweater that simply read “remember.” The Holocaust survivor pulled out old photographs, one by one, to recount painful memories.

A resilient woman, with a warm, forgiving soul, came to lend her voice to a new bill that would require Wisconsin public schools to teach the Holocaust.

Born in Budapest in 1936, her first memory of the dangers of the war was when her relatives visited from Greece and told the family that they should quickly leave Hungary because of the dangers that lay ahead. Soon after, her father was taken away to a labor camp when the Germans invaded and started to round up the Jews.

She and her mother moved in with her uncle’s family and the next day her previous house was raided and everyone living there was rounded up and taken to Auschwitz. Soon after, the SS (Schutzstaffel, which translates to “protection squadron”) arrived in the courtyard of their building, blowing whistles and gathering all the children who lived there. Zaret hid under her mattress, refusing to go. None of the other children were ever seen again.

“Here is a picture of my father and me,” said Zaret, who was 7 at the time. “This is the last time I saw him. He was sent to a hard labor working camp for a year-and-a-half.  … Afterwards, they had to make their own graves. They shot them in their own graves.”

She saw firsthand what evil can do. A crying baby ripped from her mother’s arms was thrown lifeless against a brick wall. Piles of corpses lie in rot. Family members being shot, simply because of their faith. Images of the killings and the camp’s horrors haunt Zaret to this day.

The gripping testimony, shared March 11 before the state Senate Committee on Education at the Capitol, is a glimpse of what the Milwaukee resident chronicles while traveling the state telling her family’s story. To this day, hatred and bigotry makes Zaret worry.

“I see what they know and what they don’t know,” said Zaret, who now works with the Holocaust Education Resource Center. “And they certainly don’t know about a second world war, or what happened to the Jews and about the Holocaust.”

The Holocaust, which saw the persecution and extermination of 6 million Jews and some 3 million from other ethnic groups, took place from the time Adolf Hitler came into power in 1933 until the end of World War II in 1945. The camps had gas chambers to kill the young and old prisoners and factories to work them to death. Doctors performed crude experiments on the prisoners and etched their skin with prison numbers.

A 2018 survey in the United States found that two-thirds of millennials could not identify Auschwitz — where more than 1 million Jews were murdered during the war — and 22 percent said they had never heard of the Holocaust or aren’t sure exactly what they know about it.

The statistics rattled State Sen. Alberta Darling, R-River Hills, into writing the bill at the request of the Holocaust Education Task Force. Darling wants Wisconsin to step up and join a growing number of states embracing Holocaust education to ensure that students understand the important lessons of the Holocaust and the dangerous consequences of rising antisemitism and religious bigotry.

“As I was driving to Madison this morning I was riding alongside a cattle car,” Darling said. “I visited a camp in Germany. I was struck by what I saw on these films … many of these people were put into train cars with their families and treated as cattle going into these camps.”

Darling said backing for the critical legislation has been bipartisan. About 50 legislators from both houses have co-signed the bill.

Rep. Lisa Subeck, D-Madison, said as the nation and the state witnesses a rise in antisemitic attacks and other hate crimes in America, the urgency of Holocaust education is greater than ever. Currently, 12 states require Holocaust education, including neighboring Illinois, Michigan and Indiana. Similar bills are pending in 17 other states.

Ignorance of what happened to the Jewish people and other minorities under the Nazi regime is not acceptable, she said.

“For me personally this is one of the most important things that we can do for our children and for future generations …,” said Subeck, who is Jewish. “We all know the old adages that if you don’t know your history, you’re doomed to repeat it. And the idea that we could repeat, that we could have another Holocaust and similar genocide horrifies me.”

There are fewer than 100 holocaust survivors in Wisconsin.

The Nathan and Ester Pelz Holocaust Education Resource Center in Milwaukee has already agreed to provide curriculum materials at no charge to the state. The Assembly passed the bill in February with a vote of 98-0.

State Sen. Luther Olsen, the Senate committee chair, said before the meeting adjourned that the committee would pass the bill so it could head to the full Senate. A date for the committee vote hasn’t been set.