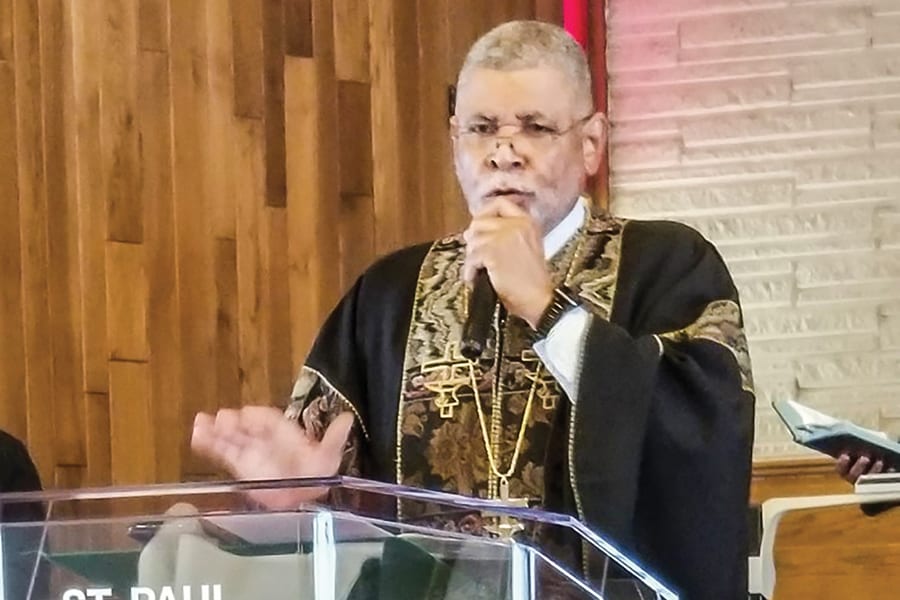 At 75, Rev. Joseph B. Baring Jr., is keeping the gold in his golden years. Don’t let the golden age fool you. A traditional age requirement by his church’s denomination, however, has led to Baring stepping down as head pastor of St. Paul AME Church, the city’s oldest Black congregation in Dane County.

Ask him to reflect on his life serving and protecting others, and soon one realizes they are in the presence of living history. The military veteran who also risked his life protecting civil rights marchers from attack dogs and bullets, hasn’t lost that zest for wanting equal justice for all.

This clearly explains why he gets baffled by people who have the right to vote, but don’t.

“I remember the first time I voted I felt like I was grown,” said Baring, who cast his first ballot in 1964. “It was such a joy to vote because I knew the history of the people behind me. My mother and father taught me that there were people behind me that afforded me the opportunity to make my voice heard with a ballot.”

A proud great-grandfather, Baring said he drilled this lesson about the democratic process into his children and his children’s children. Voting is a right, not a privilege.

“The national election is one thing, but your local elections are what governs you,” he said. “When you learn to vote in all the elections, then your life may change. But even if it doesn’t change, voting is your opportunity to make your voice heard.”

A native of Omaha, Nebraska, Baring didn’t receive his calling to serve in the church until his later years.

He proudly served in the United States Navy, from 1962 to 1966, during the Vietnam War.  While fighting overseas, inequities and blatantly racist treatment blemished his military experiences.

“Racism was rampant in the military,” Baring recalls. “When we went ashore, we had to travel in groups of four or five just to keep from being attacked. The bars and restaurants were white, and it was the same as if you were in Mississippi … you took your life into your own hands going into those places.”

Black soldiers were receiving inadequate training and resources. And, fighting for the country’s freedom came with a price.

“Rumors had gone around in Japan that the Black men that serve in the military were monkeys and they had tails. Many times we were subjected to taunts by people who wanted us to show them our tails. I couldn’t believe it,” added Baring, whose family has served in the military for generations.

Weekend passes to Milwaukee allowed him to meet and court his future bride, Carrie. They got married in 1965. “I told her when I met her ‘I’m marrying you.’ And she thought I was crazy,” Baring said.

Once his enlistment duties ended, Baring and his wife made Milwaukee their home. The couple raised three children while he worked as an ironworker foreman for the City of Milwaukee; a Journeyman Ironworker; and a state certified welder.

“I was the first Black ironworker in the state of Wisconsin,” said Baring, who graduated from a building trades apprentice program at Milwaukee Area Technical College. “There were so many construction jobs then. We did very well.”

Racism was prevalent in Milwaukee. So much so that Baring became a member of NAACP Youth Council Commandos. Known for being no-nonsense, savvy and tough, the group of young men protected civil rights marchers. For 200 consecutive days ꟷ from August 1967 to March 1968 ꟷ local activists protested racial discrimination in housing in marches infamously called “The March on Milwaukee”. The movement contributed to the national fight for civil rights for African Americans and to passage of the federal Fair Housing Act in 1968.

“We call the 16th Street Viaduct the Edmund Pettus Bridge of Wisconsin,” recalls Baring, adding others would joke that the bridge connects Africa and Poland.

The Commandos wore army fatigues, black berets, and black boots. They provided security and energy for the tattered marchers.

“The police burned our Freedom House … that’s were the Commandos always gathered and organized the marches,” said Baring, of the 1966 event. “The young people inside had to run for their lives out the back of the house.”

The Freedom House was destroyed beyond repair. It didn’t stop the Commandos or Youth Council. They lead a rally in the front yard the next day.

After the assassination of civil rights activist Dr. Martin Luther King, Jr., the federal government passed an open housing law. Then, on April 30, 1968, the Milwaukee Common Council passed a city-wide open housing ordinance that was stricter than the federal law.

Baring said he understands the struggles in the Black Lives Matter movement and the tireless frustrations by those seeking restorative justice.

“I don’t condone violence and I don’t condone burning,” Baring said. “But there comes a point where people just get fed up with not being heard and sometimes that kind of violence gets the attention of every body … When you’ve been shut up for so long and nobody hears your voice then people will do thing saying ‘Can you hear me now.’”

Discerning the Call to Ministry

Baring became a member at St. Mark A.M.E. Church in Milwaukee, where he served as a steward and as vice president of the Usher Board.  He was called into the ministry in 1989. He became an ordained minister in May 1990 and an ordained Itinerate Elder in the African Methodist Episcopal Church.  Baring holds a degree in theology and has been presented with many continuing education certificates in a variety of ministries.

A lifelong member of the national NAACP, Baring went on to pastor five churches. In 1995, he led his first church at Bradford Memorial A.M.E. Church in Milwaukee.

While serving at Payne Memorial A.M.E. Church in Waterloo, Iowa, his wife of 42 years, died in 2006 following a bout with cancer. He married again in December 2007 to Denise Lynn. The Barings came to Madison in 2013 to serve at St. Paul AME Church.

Baring officially retired on Oct. 3, during the AME Church’s General Conference. His 30-year commitment to ministry will not end. His community services also continue through his service on numerous boards including four Dane County advisory boards and the Equity and Inclusion Advisory Board.