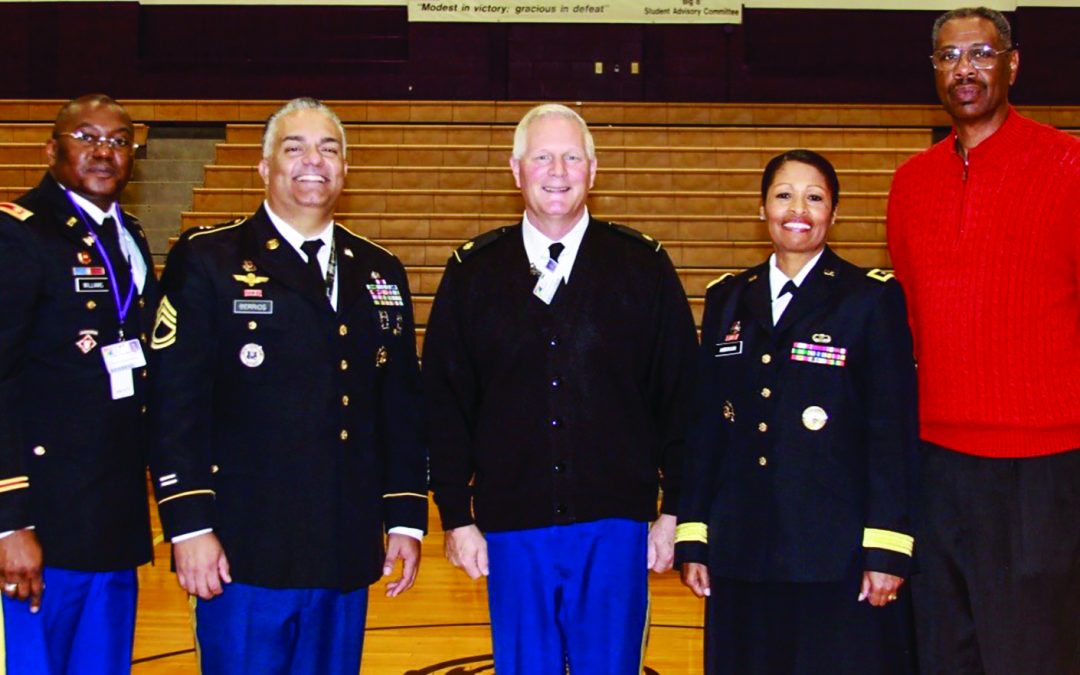 It is that time again. Across the nation, people are getting ready to celebrate Veterans Day.  While many look forward to honoring those who served and paid the ultimate sacrifice, it is unfortunate that veterans only receive such attention at this time. Over the past 15 years, thousands of our sol-diers have sacrificed and served abroad, while most Americans go about their daily routines with-out a care in the world. On this Veterans Day, I want you to set aside your philosophical and politi-cal differences. I challenge you not to argue about whether to stand or to kneel while the National Anthem is being played. I encourage you to put aside religious and moral differences. I simply ask you to say, “Thank you for your service” to each veteran that you meet. Remember, it was their service and sacrifice that allows you to practice and enjoy such freedom of expression! Throughout many past national conflicts and currently, our soldiers have selflessly and courageously fought to preserve the democracy that we enjoy today. Such service does not come without a cost — as freedom is not free. Many soldiers have lost their lives to provide the blanket of freedom that we enjoy. These soldiers served willingly and with each deployment they gave our nation a blank check with their lives as the potential payment. When soldiers deploy, there is no guarantee that they will return. One of the greatest symbols that represents the spirit of sacrifice through service is that of the Wisconsin minuteman. Like in the “old” days, when called upon and on a moment’s notice, the minutemen would drop their plows and pick up their weapons to answer the call to duty and to serve a cause much greater than themselves. Today, that spirit lives on throughout our armed forces. Across our fighting force, our diverse group of brave soldiers continue to answer the call, despite great sacrifice and hardship to themselves.

However, shamefully, veterans who in some cases sacrificed everything for this country are home-less, hungry and without medical care. Thousands of combat veterans suffer not only physical but invisible wounds. Many suffer from post-traumatic stress, brain injuries and other health conditions as a result of their combat related service. Unfortunately, too many of these servicemen and wom-en do not get the care they need and deserve. As a nation, we must do a better job to serve those soldiers who sacrificed and served us.

In this article, we want to highlight a few Wisconsin veterans and thank them for their service.

First Sergeant James Bell (retired) is a veteran who recently retired after 50 years of service. Bell enlisted in the Army in 1967 and went to Vietnam from 1968-1969. Upon his return, he continued to serve in the Army until 1990.  After 23 years of active duty, Bell decided to share his knowledge with the students at Beloit Memorial High School in the JROTC Program until his retirement in 2017. Proud-ly, Bell served honorably for 50 years! He is the last of a dying breed, as there are not many people cut from the 50-year cloth these days.

As well, we cannot forget other Wisconsin veterans who have served such as Louis Adams. He was a Korean War veteran and lifelong educator in Milwaukee Public Schools. Most notably, Adams was part the Army’s historic “Triple Nickel”. He was part of the 2nd Ranger Infantry Company, which was an airborne unit of all Black soldiers who broke racial barriers during the Korean War. This was the U.S. Army’s first, last and only all Black Ranger unit. I had the pleasure of knowing and talking with Louis for many years, as we were both members of Omega Psi Phi Fraternity, Inc. He was truly an iconic but humble man whose love for this country and humankind was without question. As a token of his love for God and country, each day until he passed, Louis still carried his coin from the 1950’s in his pocket. He was awarded the Purple Heart Medal and many other decorations for his outstanding service to this nation.

More so, we should never forget our own Gary Wetzel. He resides in Wisconsin and one of the liv-ing recipients of the Medal of Honor, which is the highest military decoration that a soldier can receive. He received this honor from President Lyndon B. Johnson in 1968 for his courageous ac-tions under heavy combat during the Vietnam War with the 173rd Assault Helicopter Company, 11th Combat Aviation Battalion, 1st Aviation Brigade. Like Louis Adams, I had the pleasure of meet-ing Gary. Upon meeting Gary, he greeted me with brotherly love. To be such an iconic and heroic figure, he was very humble and down to earth. Although we served in different time periods, there was mutual respect as we shared a common bond. Gary is an outstanding Soldier whose service and sacrifice must never be forgotten.

These are just a few of the many veterans who deserve our thanks. On behalf of a grateful nation and from UMOJA Magazine, we salute all veterans for making the world a safer and better place. When you look back through the dash of your lives, your true measure will be not determined by how much you had, but by how much you gave. All veterans gave some and some veterans gave all. To all our veterans in Wisconsin and around the world, we honor and thank you for your service. As a result of what our veterans did in the past and the service our soldiers currently provide, it al-lows us to flourish in the present, and gives us hope for a brighter future. This is why when we you see a veteran, you should respectfully say, “Thank you for your service.”

Guest Contributor: Major (Ret) Darrell L. Williams is retired from the U.S. Army after 29 years of ser-vice to include two combat tours in both Iraq and Afghanistan. He received many decorations for his outstanding service to include the Bronze Star Medal and the Purple Heart Medal.