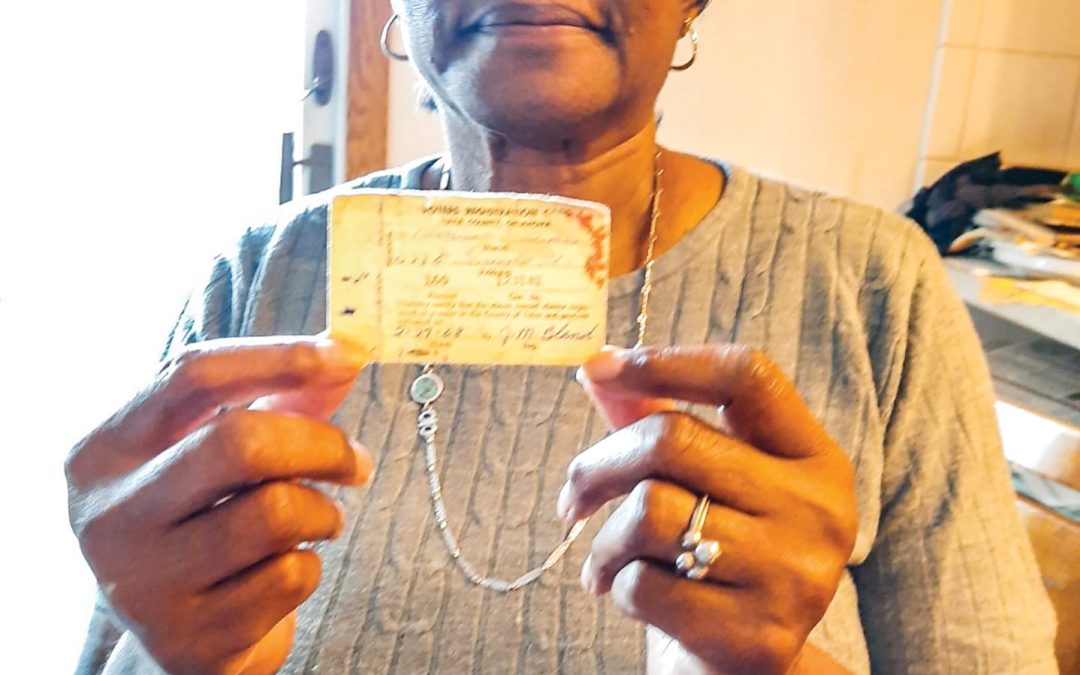 Virginia Latimer keeps the voter registration card tucked in her wallet like a sweet note from a first love. The edges are tattered slightly and the writing is faded. The treasured document is a symbol of triumph for the 79-year-old Wisconsin resident who was raised in a time when voter intimidation went unchecked.

“I have not missed voting since the day I turned 18 in 1959,” Virginia Latimer said.

She revealed the voting card during a Zoom chat when asked to share memories of the struggles African Americans unfairly experienced while seeking the right to cast a ballot. Joined by her husband, Dr. Charles Latimer and brother-in-law, Dr. James (Jim) Latimer, the conversation was better than what is found in childhood history books.

The three reminisced about the days of ol’ when Black families prayed together and lived off the crops and livestock they tended to. Living segregated was a way of life. It was the Jim Crow era when Black folks who tried to vote were threatened, beaten, and hung.

Sadly, firsthand accounts weren’t often past down generation to generation. Black people were raised believing that every word said to your child breathed life or death into them. So, witnesses of brutal attacks and humiliating intimidation incidents kept African Americans and their families hush-hush.

“My mother and father knew every lynching that ever took place. But they never said anything to us,” said Charles Latimer, adding his mother discouraged him from attending theology college in Indiana only to find out 30 years later that it was where James Cameron survived a maple tree lynching in 1930.

Voting, then and now, is the greatest expression of power and resistance.

After the end of the Civil War, would-be Black voters across the Deep South faced a host of disproportionate barriers to enfranchisement. It included registrars asking potential voters to guess the number of jelly beans in a jar or recite portions of the U.S. Constitution.

Other cities and counties required people to pay a tax to vote. The taxes were about $25 to $50 dollars in today’s money, which is costly for those with little means.

Literacy tests were also introduced into the voting process with the Jim Crow laws. They were designed to keep white and Black people segregated, to deprive voters, and to keep Black people subjugated, undermining the 14th and 15th Amendments of the Constitution.

Some literacy tests instructed potential voters, who could not prove having at least a fifth-grade education, to “Do what you are told to do in each statement, nothing more, nothing less. Be careful as one wrong answer denotes failure of the test.”

The questions were often confusingly worded and intentionally designed to put the voting applicant through mental contortions. Here are some examples:

The administration of literacy tests was unfair and discriminatory. They were not declared unconstitutional in the South until 95 years after the 15th Amendment was ratified, by the passage of the Voting Rights Act of 1965.

Some of the Southern states allowed Black Americans to vote if they owned property. That was the case for Virginia Latimer’s family.

She is part of the Jefferson family legacy in Bellville, Texas. Her family, descendants of slaves from Guinea turned farmers, and acquired 26 acres of land known as Jeff Hill. Virginia Latimer is the last living family member born on the land.

“When my family purchased the land, they charged them 10% interest in 1867,” Virginia Latimer said. “They could not read nor write. We have an X on the deed. … It was very, very important for you to go and vote even if they had to drive you down on a wagon to get to the courthouse.”

The opposition ꟷ the store owners, the butchers and employers ꟷ would try to impress upon Black voters that their choices for elected officials weren’t necessary because they knew who should hold office, she said.

“I would be told ‘this land belongs to you. Now, when you go to vote, you can simply say you own that land.’ And that was it,” said Charles Latimer, who was born and raised in Tulsa, Oklahoma.

He was 19 when he first voted, and Dwight D. Eisenhower was president. It’s easy to remember because his older brother, James Latimer, performed in Indiana University’s Marching 100 band at Eisenhower’s inauguration.

At the height of the civil rights movement, Congress banned the Jim Crow laws with the Civil Rights Act of 1964 and, in the case of literacy tests, the Voting Rights Act the following year. But poll taxes for state elections in several states, including Alabama, survived until they were finally eliminated by court orders in 1966.

Our ancestors made many sacrifices to gain the right to vote. Choosing not to is a dishonor to the Black lives beaten or lost.

Today, voting rights are again under assault. Wisconsin is one of 25 states that require more restrictive voter ID laws in place ꟷ making it harder for citizens to register (and stay registered).

“Young people have to understand things were different,” Virginia Latimer said. “They need to understand the sacrifices people made so they could have the privilege to vote without outward or overt racism.”

James Latimer added that Black voters’ civil rights are constantly under attack, but he believes in perseverance.

“We need to be united in our differences,” said Latimer, emeritus professor of Music at the University of Wisconsin-Madison. “Things will always be different, but we have to respect differences from every side.”