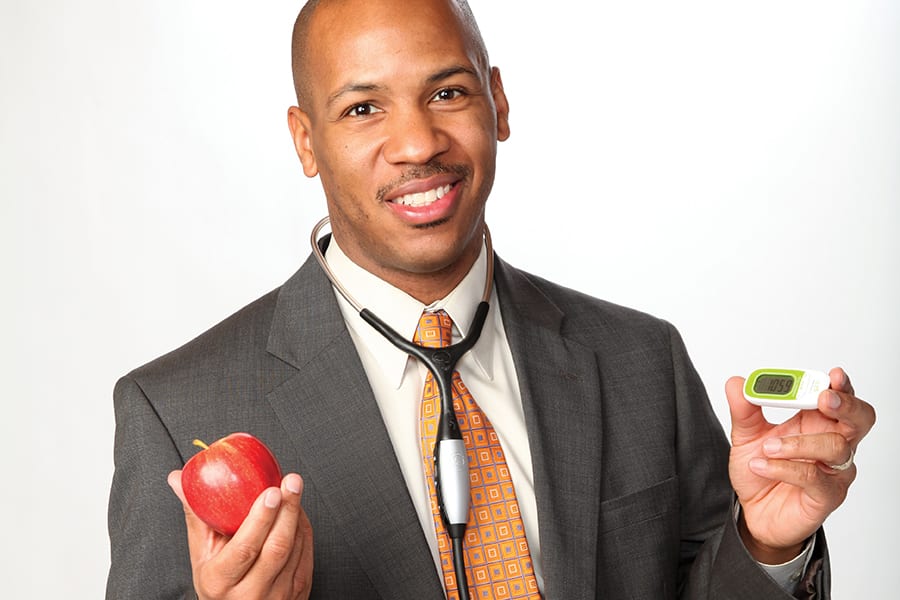 The prepared list of interview questions was useless. Seeking reasons why African American people are disproportionately losing the battle against COVID-19, instead unearthed a mind-shaking truth about Black health since the first enslaved Africans arrived on the muddy shores of Jamestown 400 years ago.

Dr. Tito Izard, in explaining reasons for glaring inequities facing African Americans, sounds more like Malcolm X, than an advice-lending family physician. As president and CEO of Milwaukee Health Services Inc., Izard said the solution lies in the promise of this country: liberty and justice for all.

Improving the health of African Americans has long been an underutilized weapon for social justice. Izard’s mission is to encourage health care providers and policymakers to move toward restorative health equity by any means necessary.

“They know that disparities exist, but they truly don’t understand the root cause. The bottom line is American descendants of slavery are not first-class citizens. They retain three-fifths of citizenship status. And this is what three-fifths health status looks like in America,” he added, citing unequal statistics in Black and white home ownership, household income, and drug incarceration rates to name a few.

Izard, deemed “the societal conscious of health equity,” said health disparities between Black people and their white counterparts have been part of the American landscape for 400 years. It’s inherent in the inequalities that have shaped the Black experience for centuries.

White physicians assumed Black bodies were fit for slavery and thrived under white control, according to the U.S. National Library of Medicine National Institutes of Health. High rates of morbidity and mortality brought about by overwork, horrendous living conditions, sexual abuse, violence, and separation marked the life chances of enslaved Black Americans.

Once slaves were emancipated their increased rates of illness and death were inevitable. These beliefs would follow African Americans through slavery, the Civil War and the Jim Crow era.

Poor health and lack of access to health care, followed African Americans out of the rural South and into the cities. Then, housing segregation, crowding, and heavy manual labor faced by Black men and women took their toll.

“Once you understand this, it really opens your eyes,” Izard said.

Homegrown and Giving Back

Milwaukee Health Services is located in Milwaukee’s 53212 zip code, just a few blocks away from where he was raised. The organization, whose motto is “Your Health Is Our Business,” gave away over 5,000 COVID survival kits.

Compassion for helping others started at home as he watched his parents often lend a hand to neighbors struggling with day-to-day living. His oldest brother Dr. Kevin Izard also served as a role model.

Dr. Tito Izard, who received his M.D. from the University of Wisconsin School of Medicine and Public Health, is consistently voted one of the city’s Best Family Physicians. In 1999, Izard became the first Black family physician to be appointed assistant professor within the University of Wisconsin’s Family Medicine Department and Aurora Health Care’s youngest medical director to lead a multi-disciplinary clinical practice.

Izard practices a holistic approach towards serving his patients.

Coronavirus Is Not An Equalizer

Black people are being infected and dying at alarming rates since reports of COVID-19 cases began in March. Once it took root in Black communities, like Milwaukee, it erupted. Statistically, African Americans are roughly four times more likely to die of COVID-19 in Milwaukee County than a white person.

Izard questions why there hasn’t been a “FEMA-like response” to the novel coronavirus pandemic in Milwaukee’s central city.

Gov. Tony Evers referred to the coronavirus deaths among African Americans as a “crisis within a crisis.” Racial disparities such as infant mortality, childhood lead poising, and obesity have plagued Milwaukee for years. So much so that in 2019, Milwaukee County declared racism a public health crisis.

The pandemic also spotlights health care barriers among marginalized groups. In this time of social distancing, telehealth or online video appointments have kept many people connected with doctors and therapists. It was determined that many Black and Brown residents don’t possess the technology for those types of appointments.

Izard stresses the reason is not due to poor choices by individuals, but rather the historical, institutional and ongoing effects of racism. Just being Black in America is the reason for lopsided heath statistics.

“What this tells us is how desperate African Americans are in need of a comprehensive reparations plan, which includes restorative health equity. When I say comprehensive reparations plan the components, I’m referring to includes a criminal justice reform, restorative health equity, housing integration, economic inclusion, educational attainment opportunities, and it has employment and industry representation.

“These six components are what we need to help make American descendants of slaves whole again. Once we have restitution, can we finally have reconciliation. Anything less will continue to be a blight on this country,” he added.

COVID-19 has exposed the need to reconcile this historical debt.

In October, Wisconsin held the rank as one of the nation’s top hot spots for the coronavirus. The Centers for Disease Control and Prevention, which tracks virulent outbreaks, recommends that all people, whether or not they have had COVID-19, take steps to prevent getting and spreading COVID-19. Wash hands regularly, stay at least 6 feet away from others whenever possible, and wear masks.