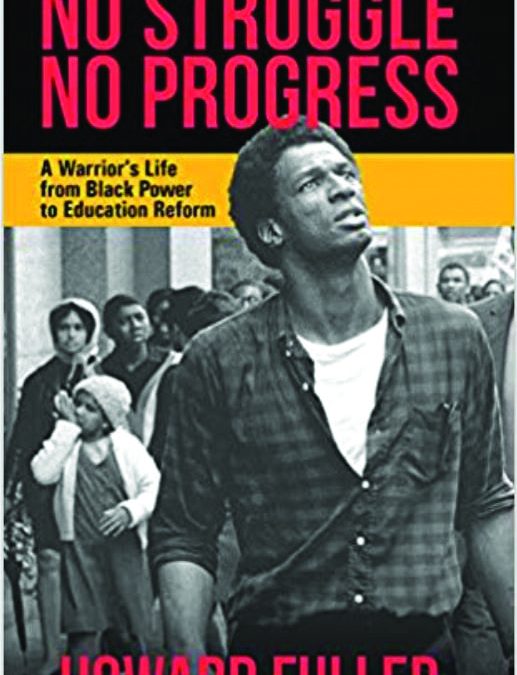 I love history books and biographies and I just finished a great book that seems to combine both. No Struggle No Progress: A Warrior’s life from Black Power to Education Reform.

This is an autobiography by Dr. Howard L. Fuller, one of Wisconsin’s most charismatic leaders. This book reads like a novel because it’s action packed. Some of the stories are painful to read, especially the police brutality that he faced and later almost dying in Africa with Freedom Fighters in Tanzania. There are lots of great pictures in the book that show how Fuller’s journey unfolds.

Early in his life he found truth in the words of the great Frederick Douglass: “Power concedes nothing without a demand. It never did, and it never will.”

“So struggle we must,” Fuller said.

I have known Howard for nearly 40 years, but I was still amazed at his story. He has sat at the table with many of our national leaders and has a history with both Barack Obama and George W. Bush. He has played a leading role in the parental choice movement and has devoted his life to educational reform. The school that he founded in Milwaukee ꟷ Dr. Howard Fuller Collegiate Academy ꟷ boasts a 100% college acceptance rate over the past seven years. The class of 2019 earned $2.5 million in scholarships. Over 330 students are enrolled in the high school.

Fuller has had laws passed; he founded an African-centric university; he served as the superintendent of Milwaukee Public Schools; he served in the Governor’s cabinet; and, he served as a mentor to numerous students.

The work he did in poor communities in North Carolina is legendary and his academic home remains at Marquette University where the distinguished education professor heads up its Institute for the Transformation of Learning. He founded it in 1995 to provide quality educational options for students of low-income families.  Since then, the Institute has won nearly $14 million in grants from local and national foundations for working across systems to reform K-12 education in Milwaukee and nationally.

If you admire people who don’t give up; who get things done despite impossible odds; who devote their life to service and who have made a real difference in the lives of thousands, you’ll enjoy this book. He doesn’t sugar coat it or leave out the controversies surrounding his life.

Fuller received his B.S. degree in Sociology from Carroll College in Waukesha, his M.S.A. degree in Social Administration from Western Reserve University in Cleveland, Ohio, and, his Ph.D. in Sociological Foundations of Education from Marquette. He has received numerous awards and recognition including four Honorary Doctorate Degrees: Doctorate of Humane Letters from Carroll College in 1987; Doctorate of Laws from Marian College, Fond Du Lac, Wisconsin in 1992; Doctorate of Business and Economics from Milwaukee School of Engineering in 1995. Doctorate of Humane Letters from Edgewood College, Edgewood College, Madison. He is also a member of the Charter School Hall of Fame of the National Alliance for Public Charter Schools.

He serves on the Board of Milwaukee Collegiate Academy, Milwaukee Region Board of Teach for America, FaithActs, Milwaukee Charter School Advocates, The Black Teacher Collaborative and Education Cities. He is an Advisory Board member of the National Alliance for Public Charter Schools.

His memoir, No Struggle No Progress, can be purchased on Amazon.