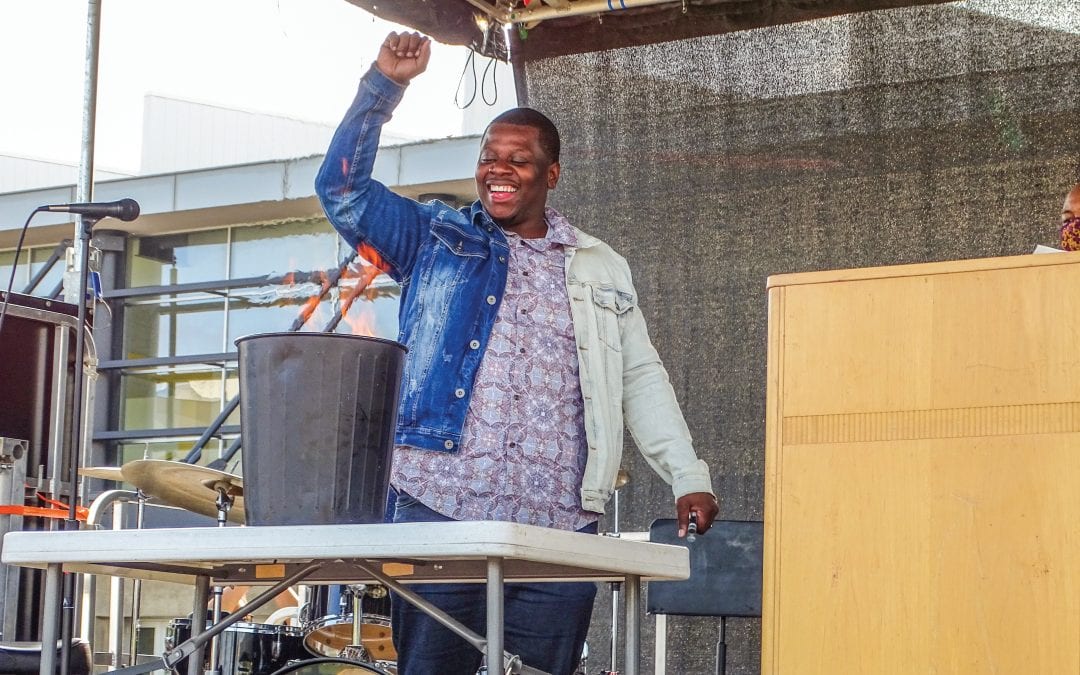 ‘We’ve Come This Far By Faith’

Mt. Zion Baptist Church had the audacity to hope.

Praying for healing and unity during a surging public health pandemic, coupled with communities convulsed by racial and cultural divisions, is what most Christians open their hearts to.  How about asking the congregation and community supporters to help pay off the mortgage under those same circumstances?

Mt. Zion, one of Madison’s oldest and most storied African American churches, did just that.

On Sept. 13, under a picturesque sky, believers gathered in the parking lot of the Alliant Energy Center and converted it into a joyful worship and mortgage burning ceremony. It is the church’s fourth incineration of the promissory note. The first was on Dec. 19, 1955 when Mt. Zion was located on West Johnson Street.

“God has provided in the middle of a pandemic in ways we never thought he’d provide,” beamed Rev. Dr. Marcus Allen, Mt. Zion’s pastor and president of the African American Council of Churches in Madison.

On July 1, Allen stepped out on faith and renewed a mortgage retiring campaign in the midst of COVID-19, when most were isolated in their homes. The pastor had hoped to pay off the remaining $150,000 by the end of the year. Instead, it happened in two months.

“I want to be honest,” Allen said, reminiscing on the worry he had of how COVID-19 would directly affect the church. “I did not think that we’d be able to do what we’re doing now. I thought we’d lose members. I thought people wouldn’t come to church online and I didn’t think people would give.

Now, as the congregation prepares to celebrate its 110th birthday next year, it can begin debt free.

“We’ve come this far by faith,” Allen said, rousing claps and honking of horns from a filled parking lot of worshipers. “Faith is the substance of things hoped for. Faith is the evidence of things not seen. God has given us a measure of faith to do great and mighty things.”

Church members donated $75,000. Then Christ Presbyterian Church called and pledged another $150,000 — $75,000 to pay off of the mortgage, and another $75,000 toward the church’s next project, which includes a new community life center that will house community programs, such as their food pantry, academic success programs, and mental health crisis services through a new partnership with Anesis Family Therapy.

“Can I tell you, we are in the midst of what it means to having cup runneth over,” Allen said.

Local dignitaries were on hand for the day’s event, including Lt. Gov. Mandela Barnes, Rep. Shelia R. Stubbs, who represents the state’s 77th Assembly District, and Dr. Ruben L. Anthony Jr., president and CEO, Urban League of Greater Madison, among others. Church leaders from across Dane County were also present.

“Mt. Zion Baptist Church was the first place in Madison that let me preach outside my living room,” said Rev. Dr. Alex Gee, pastor of Fountain of Life Covenant Church and president of the Nehemiah Center for Urban Leadership Development. “I was a 17-year-old preacher that no one trusted … But the first church to recognize my 17-year-old voice and my call was Mt. Zion Baptist Church and they let me preach.”

Recognizing the church as a pillar of rich history, Gee added: “When your church was planted over a century ago, movements like The Niagara Movement, the National Urban League and the national NAACP were brand new movements. Mt. Zion came on the scene in that same era in order to serve out those missions and agendas … you have been bringing the realities that have shaped America to Madison, Wisconsin.”