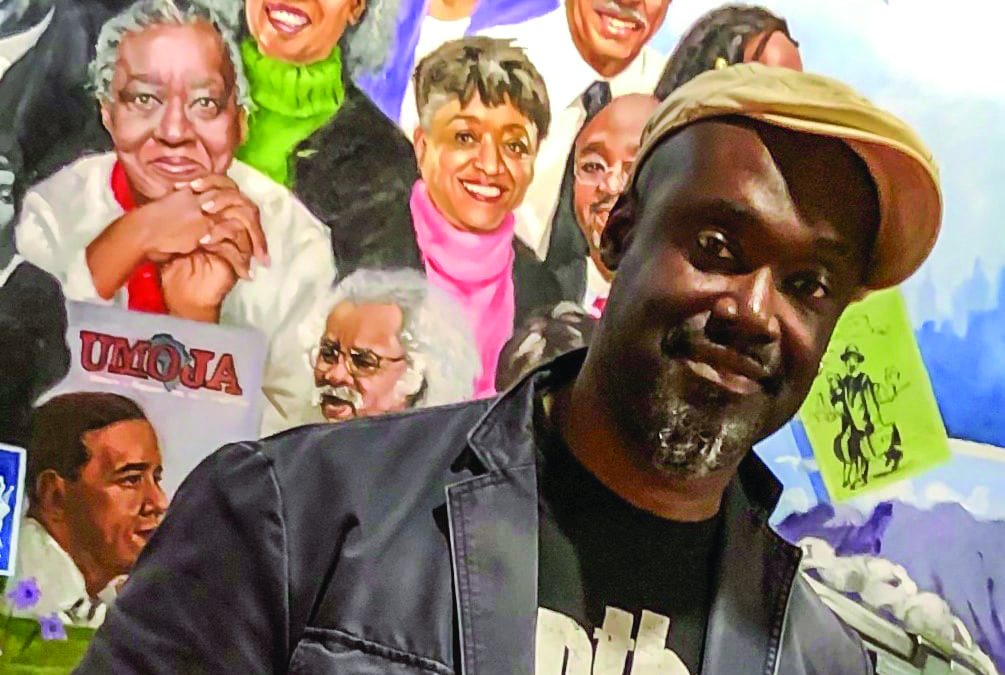 Jerry Jordan’s rich and riveting imagery of the monumental moments in modern African American life give art aficionados something they can feel.

His signature style of contemporary realism, a form of expressionism he said is less academic and restrictive, is evident in a 1997 oil painting of a young lady with her parents at college graduation. The artistic rendering served as the cover image of UMOJA’s annual education issue that year. The piece marked Jordan’s first of nearly 20 UMOJA covers created in support of an editorial vision focused on presenting the best of who we are to ourselves and the world.

Like many artists Jordan found himself taking on practical bread and butter jobs to pay the bills and care for his wife and two children. After a stint at the Wisconsin Historical Society restoring editorial copy and photographs and working part-time as a Madison Area Technical College drawing instructor, he later accepted a role in the undergraduate admissions office at the University of Wisconsin-Madison where he is now a recruiter and academic advisor in its school of education.

A chance encounter with UMOJA Publisher Emeritus Milele Chikasa Anana at an Omega Psi Phi cookout changed the trajectory of Jordan’s artistic journey. The meeting connected him to a platform to share his creative craft with the community.

“My work appearing in UMOJA was a big boon for me because I always wanted to be an artist,” said the Racine native and UW-Whitewater arts graduate who moved to Madison with his wife, Nyra, in 1996 after wrapping up his master of science degree in curriculum instruction with an emphasis in art education. “People started seeing my paintings in the magazine and would later call, asking me to design their own portraits.”

Beyond connecting him to local clients, Jordan’s paintings caught the eye of corporate America and Hollywood film marketers. His interpretation of the historic Black porters of the Pullman Rail Company of the 1920s became the face of a national ad campaign sponsored by American Family Insurance in 2002. The campaign’s launch coincided with the Showtime cable release of 10,000 Black Men Named George, a film about the Black Pullman porters directed by Robert Townsend and starring Mario Van Peebles, Charles S. Dutton and André Braugher.

That strong desire to amplify the contributions of African Americans to local, national and global culture continues to guide his artistry.

“Freida told me I had to get in on this,” he said. “I submitted my proposal to focus my mural on Madison’s Black pioneers and trailblazers. People who shaped the community as we now know it.”

He called his mural Legacies. At dimensions of 5-feett-by-10-feet in size, the oil painting consists of two large canvases. The panels are featured prominently within the lower level of the school. The initial sketch featured Mr. John Hill, owner of Hill Grocery Store — the city’s first Black business; former secretary of state Vel Phillips and, Ms. Milele, who became the first African American elected to the Madison Metropolitan School Board, in addition to transforming UMOJA from a simple calendar event listing into a monthly glossy dedicated to promoting the achievements and accomplishments of Madison’s Black citizenry.

From concept to design, Jordan’s mural to five months to complete. His initial three portraits expanded to a multi-generational mix of 37 men and women with strong family connections to the city and other national figures, buildings and cultural artifacts that significantly impacted the Southern Wisconsin region. Much of his research and inspiration for the project came from people and events chronicled in the pages of Muriel Simm’s book Settlin’: Stories of Madison’s Early Black Families. From the Allison House, that provided housing to Billie Holiday and Duke Ellington ꟷ when segregation barred them from city hotels to the logo of the Prince Hall Masons and inclusion of luminary figures in politics, education, business, law and theology — the level of depth and detail is noteworthy.

“Our collective imprint on Madison is undeniable,” said Jordan. “It is both humbling and an honor to lift up such amazing influencers.”

In addition to Legacies, Jordan’s work is currently on display at the Overture Center for the Arts through March 1 as part of its winter exhibition, Human Identity — a portrait series in Gallery II featuring paintings that celebrate wokeness in defiance of ancient beliefs fueled by fear, hate and cruelty.

“I am very appreciative to Ms. Milele for giving me an opportunity to showcase my work. She has a level of tenacity, focus and determination to get things done that I admire,” he said. “I am excited about taking my art to the next level.”