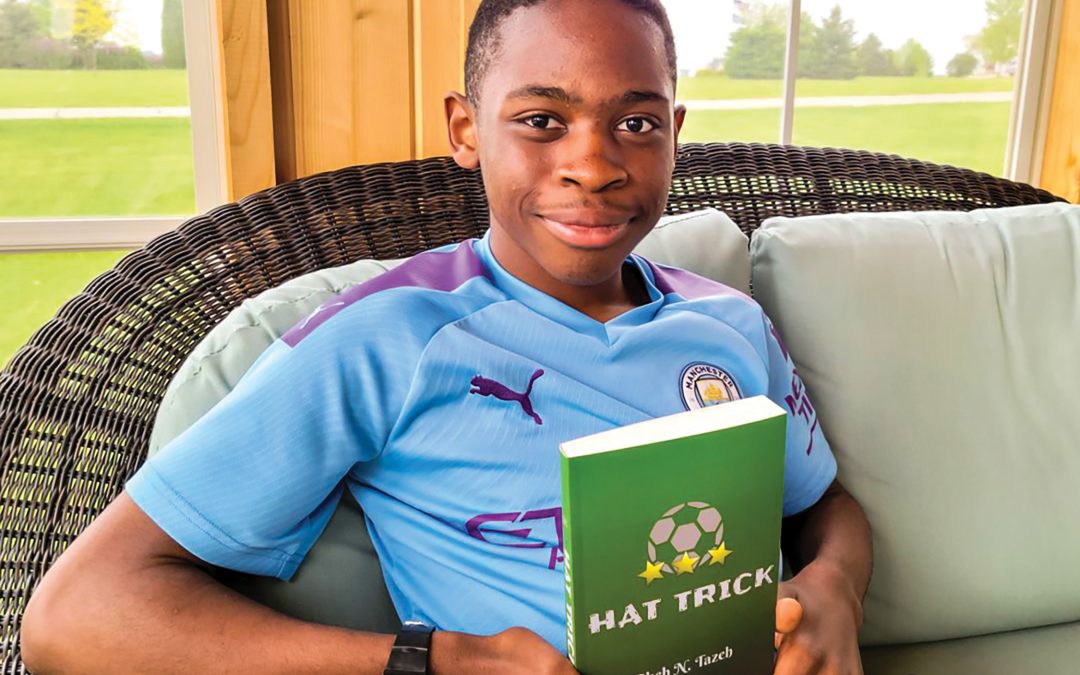 ‘Once you start writing, you’ll get into a groove.’

A Group Health Cooperative obstetrician encouraged Yvonne Tazeh to eat well, exercise and read aloud to the growing baby in her womb. The advice came repeatedly with each pregnancy wellness visit.

Read to her unborn child?

The suggestion seemed preposterous, at first. Then, the young expecting mother, and her husband, Ngii Tazeh  ̶  both from Cameroon in Central Africa  ̶  talked themselves into giving it a try, discovering that talking, singing and reading to a baby, even before birth, can foster early brain activity and promote early literacy skills.

“This was foreign to us,” Yvonne Tazeh giggled. “We were a young couple in love and happy, so we thought, let’s give it a try. My husband would sit on the floor and read to my belly. My mother-in-law would just be laughing at us and telling jokes, because she thought we looked ridiculous … But, through the grace of God, it worked.”

The child that she carried in her womb, a son named Tikeh, is now 13. Not only does he possess a voracious appetite for reading, the student athlete also penned and self-published two sports fiction books.

Tikeh, pronounced tee-kay, is a handsome eighth grader with the sophisticated mannerisms of a well-versed scholar. The second of four siblings, he admits soccer is his first love. He began playing when he was 3 years old. Reading is the only other hobby Tikeh’s given his heart to. His passion for reading began at age 5. Since then, he’s buried himself in over 1,000 books.

“I like to read year-round,” said Tikeh, who enjoys reading about adventures, medieval times and sports. “But obviously, the summer is a great time to read lots of books. I remember, when I was really young, I’d spend my summer going to the library and reading stacks of books. I’d go through them one-by-one until I was finished.”

Noticeably absent from library shelves were books about soccer featuring kids his own age. So, Tikeh did something about it and subsequently wrote a 245-page sports fiction novel titled “Hat Trick”. In it, the main character is a tween who moves to Dearborn, Michigan with his parents and two siblings, with hopes and dreams of becoming the star soccer player. Those dreams are squashed when he finds out that the team already has a star  ̶  the coach’s son.

“The main character in the book isn’t based off of anyone in particular,” said Tikeh, explaining the book’s concept. “It’s more of a combination of what the perfect student, the perfect athlete, the perfect kid would be.”

It took roughly three months for the New Glarus middle schooler to write his first full novel. Being quarantined at home during the coronavirus pandemic aided in his devotion to completing it. His family backed him in several ways. Tikeh’s dad and his older brother Kiehmi, took over editing duties. His mother, meanwhile, searched Google to educate herself on the ins-and-outs of self-publishing and copyright legalese.

“We are so humbled by all of this,” Yvonne Tazeh said. “We couldn’t be any prouder of him.”

The New Glarus library made Hat Trick available right away. Then, the Madison Public Library followed suit. A virtual celebration for Tikeh, complete with appearances from Forward Madison soccer club and the Wisconsin Book Festival, was held as a surprise to Tikeh and Kiehmi.

It can be purchased on Amazon, which displays an average rating of 4.9 stars. Books play a vital role in teaching literacy and important values to the youth. It’s the ultimate guide to sparking a child’s imagination and stimulate curiosity within them, Tikeh said.

The protagonist in Hat Trick is Gabe who makes a return appearance in Tikeh’s newly released novel called “The Fourth Quarter”. Amazon has it available in paperback for $13.99.

“One of the things I’ve learned playing soccer is perseverance and hard work,” he said. “It’s a sport that you have to take into your own hands. A lot of those traits helped me write the book.”

Tikeh is a bit of a local celebrity. This summer, Tikeh is serving as the Youth Ambassador for the We Read: Youth Voices Writers’ Contest, a partnership between Madison Public Library, Forward Madison FC and the Wisconsin Book Festival. Aspiring writers 18 and under can submit a short story, poem, song, or any other written piece until Sept. 17. The theme of the contest is teamwork.

“They decided they wanted me to be an ambassador for the contest to help encourage other kids to write,” he said. “They’ve also asked me to be a judge.”

Some of Tikeh’s favorite young adult authors include John Feinstein, Tim Green and Stuart Gibbs. Tikeh, who strives to one day be published by Random House, has his sights on studying medicine and possibly becoming a cardiologist.  He also hopes his accomplishments in publishing will inspire others his age to write.

“Just go and do it without any hesitation,” Tikeh says as advice to those who aspire to write a book. “All it really takes is to have an outline, your characters and a general plot. Maybe even a few jokes you may want included.

“Once you start writing, you’ll get into a groove.  Before you know it, you’ll have the first two chapters done. Then, you really won’t want to stop writing,” he added.