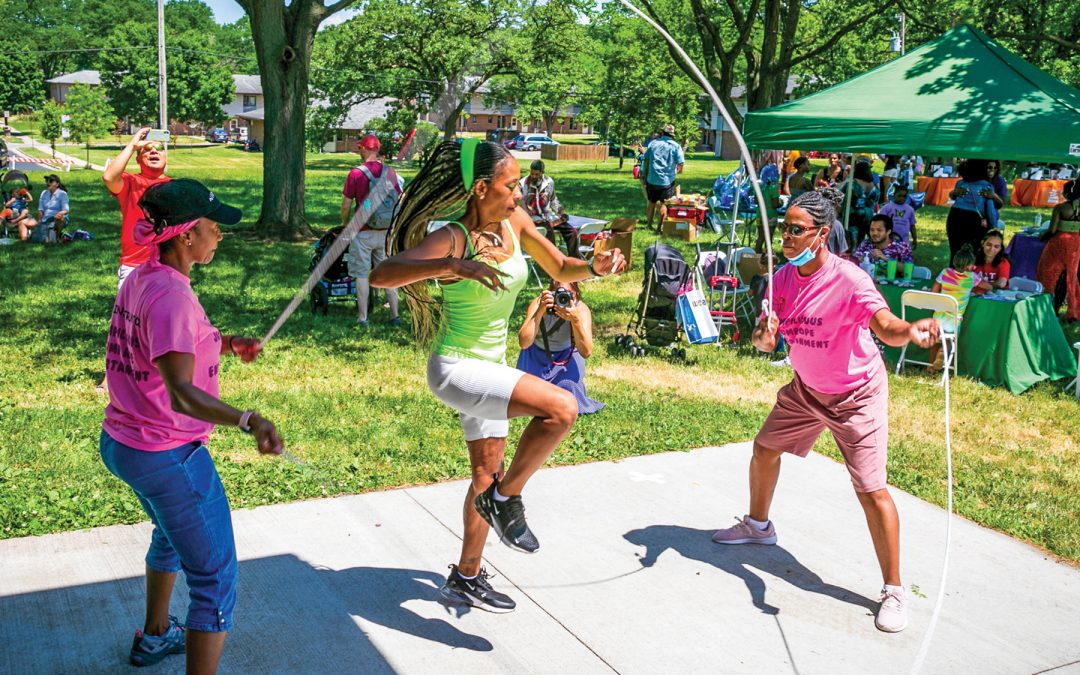 Sense of community is what Annie Weatherby-Flowers savors. It’s deeply ingrained within her. That feeling of belonging and shared commitment to be together was birthed at Juneteenth celebrations in her hometown of Milwaukee.

As a teen, Weatherby-Flowers would perch along Teutonia Avenue and be delighted by the decorated Juneteenth Day floats, marching bands and uniformed Black soldiers passing by. There was mouth-watering soul food and music to sway to. Later in the day, Weatherby-Flowers said she and others would finish off plates of food seated across from local civil rights giants ꟷ like Lloyd Barbee ꟷ inhaling their wisdom and breathing in each story.

“Juneteenth in Milwaukee was a true homecoming,” she said. “Folks were back from college and neighbors from all over would celebrate together. Community leaders would sit us young kids down and talk to us about the importance of community and civic responsibility. It was a great time.”

Weatherby-Flowers yearned for community, love and a strong sense of belonging when she moved to Madison decades ago. Church filled much of that, but she wanted more.

Thirty-two years ago, Weatherby-Flowers successfully spearheaded efforts to bring a community-wide Juneteenth celebration to Madison. Juneteenth, an amalgamation of the words June and nineteenth, honors the day 156 years ago when the nation’s last group of enslaved African American people learned they were free.

Weatherby-Flowers’ passion was guided with the blessings of Northcott Neighborhood House Executive Director McArthur “Mac” Weddle, who is considered “the soul” of Milwaukee Juneteenth Day. He recently retired after serving 42 years at the multipurpose community center.

“I earned this rite of passage by going directly to those in Milwaukee and Beloit who had been hosting Juneteenth celebrations for years so I could learn from their nuances and strategies,” Weatherby-Flowers said. “It’s extremely important to learn from the wisdom of others.”

For Weatherby-Flower, Madison’s Juneteenth is a celebration of Black empowerment, Black culture and Black resilience. It also serves to educate the public on ways to eradicate systemic racism, address health disparities and economic inequities.

“Madison Juneteenth is the one event that is totally dedicated to the celebration of the lived experiences and accomplishments of Black Americans historically and presently here in Madison and across the nation,” said Weatherby-Flowers, an active member of Fountain of Life Covenant Church.

“Black Resilience is our community’s coping mechanism and its ability to bounce back from difficult life experiences. It’s indicative of our personal and collective strength to face, overcome and adjust to the centuries of racial disparities and lack of social justice,” she said further.

Weatherby-Flowers, who works as the Community Engagement Coordinator for Madison Public Library, earned a master’s degree in adult education and has experience working as a clinical substance abuse counselor. She made room in her heart and home to also foster countless at-risk kids.

Weatherby-Flowers is also the founder of Kujichagulia Center for Self-Determination, which is the driving force for Madison’s annual Juneteenth event.  This year’s theme: Black Resilience: Rising from the Ashes, was timely as President Joe Biden signed legislation establishing June 19 as Juneteenth National Independence Day. It is lauded as the first federal holiday established since Martin Luther King Jr. Day in 1983.

A week of events kicked off on June 14 with virtual and in person programming that concluded on June 19, with a morning parade along Park Street and a community-wide party in Penn Park. Residents across Madison and surrounding communities came out in droves, with many donning Black pride apparel including raised clenched fist hats and Black Lives Matter t-shirts.

This was also the first time since before the COVID-19 pandemic Madison residents have been able to gather in large numbers. Hugs were exchanged and face masks were pulled for selfie shots on smartphones.

Sylvia Holmes-Myer, the widow of the late Rev. Dr. Ronald V. Myers Sr., paid tribute to her husband who was instrumental in making Juneteenth a national day of observance, through a previously-recorded message played at the Wisconsin State Capitol.

As president and founder of the National Juneteenth Observance Foundation, Dr. Myers worked tirelessly towards the passage of Juneteenth legislation in 45 states and the District of Columbia. Affectionately known as the Father of the Modern-Day Juneteenth Movement, he was born in Chicago, but raised in Milwaukee where he graduated from Rufus King High School. He went on to earn his undergraduate diploma and medical degree from the University of Wisconsin-Madison.

“Like Flag Day, he wanted Juneteenth to be a day of celebration and education,” Holmes-Myer said. “He dedicated his life to lobbying the legislation for Juneteenth to become the holiday …  It was a battle few dared to fight. The load was heavy to carry, and the path was not easy to travel.”

“None of that deterred the man of God, my husband, from his faith nor the path that was laid before him. Dr. Myers believed and knew that June 19th and the 4th of July made the history of America’s freedom complete. I know that the man that I called my husband, my children’s father, and your Doc, is smiling from heaven knowing that finally Juneteenth is receiving the recognition it justly deserves.  It was a long time coming,” she added, drawing a thunderous applause in the rotunda.

The Kujichagulia Center partnered with the Wisconsin Legislative Black Caucus to have the Juneteenth Flag raised in the City of Madison and the State of Wisconsin for first time in history last year. Dane County was the first to raise the Juneteenth flag in 2019. The ritual was repeated this year.