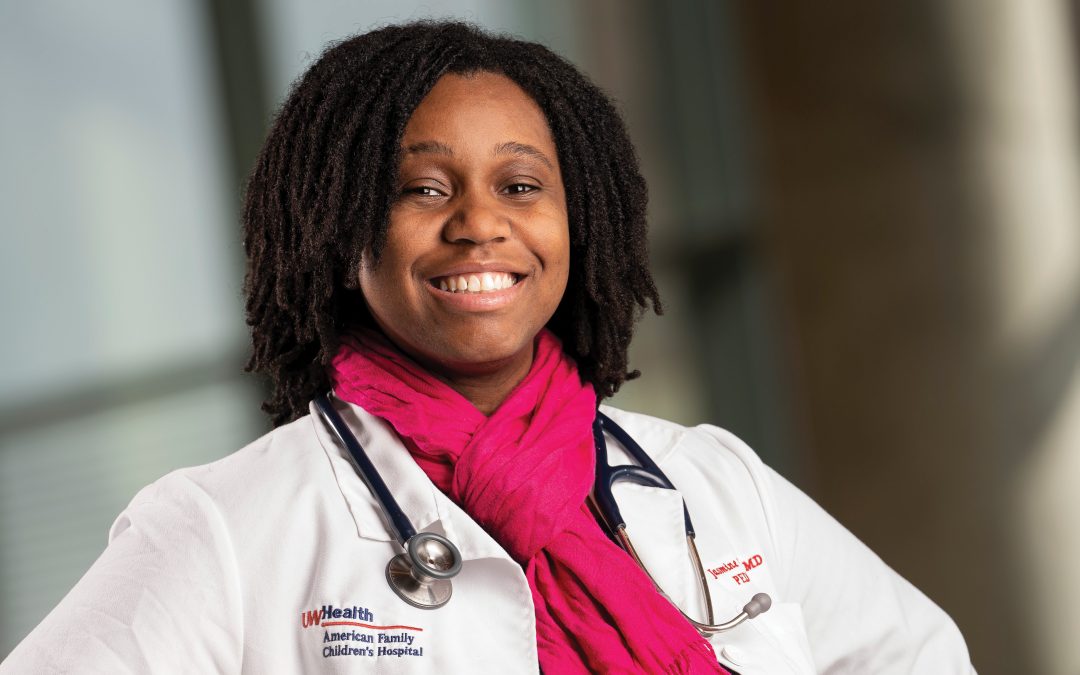 Dr. Jasmine Zapata believes that the pathway to improving African American birth outcomes begins long before conception, pregnancy or delivery. It begins when girls of color are elementary-school age and start wrestling with self-esteem, relationships, physical health and emerging sexuality.

A career in medicine — her dream since she was 5 years old — now allows Zapata to provide hands-on care for infants and their mothers in the newborn nursery.

It also gives her a platform to research community-based solutions to maternal-child health disparities, serve as a role model for minority students in the health professions and amplify her message of empowerment for girls and women. The Roots of Service

The valedictorian and graduation speaker for her Milwaukee high school class, Zapata earned a Burke Scholarship — awarded annually to 10 Wisconsin high school seniors who demonstrate a passion for social justice and a commitment to serving others — to Marquette University’s College of Health Sciences.

Zapata applied and was accepted to several medical schools, including Harvard Medical School, but chose to accept an Advanced Opportunity Fellowship to study at the University of Wisconsin School of Medicine and Public Health. “The fact that [UW] is a school of medicine and public health dramatically influenced me,” she reflects. “I was drawn to the mission of ‘it’s more than just medicine.’”

In 2010, while a second-year medical student, Zapata had yet another life-defining experience: she went into premature labor with her second child. Daughter Aameira was born at 25 weeks, weighing 1.5 pounds. She underwent multiple surgeries and suffered severe complications in the neonatal intensive care unit, including brain hemorrhage, life-threatening infection and impending respiratory failure. But she recovered, left the hospital three months later and is healthy today.

In 2011, Zapata shared her experience about Aameira’s premature birth in a Milwaukee Journal Sentinel cover story. The article focused on the interplay of biological, social and environmental factors that may contribute to the fact that African American babies in Wisconsin are nearly three times more likely to die before their first birthday compared to their white counterparts. The number-one cause is prematurity-related complications.

Zapata also stepped up the community advocacy work she had been doing since college. As the co-founder and director of the Madison Inspirational Youth Choir, Zapata used rehearsal time to talk about health and wellness topics, such as depression, drug and alcohol abuse, and healthy choices— and she hosted empowerment sleepovers to build peer support for teen girls in the choir.

“Late at night, I would ask them what was on their mind and what they wanted to talk about, and they would pour their hearts out about relationships, sex, depression and other problems,” she recalls. “That’s when I could get through to them.” During medical school, Zapata received an School of Medicine and Public Health Student Leadership and Service Book Award for her service work, and she was inducted into the Gold Humanism Honor Society, which recognizes professionalism and high standards in medicine.

With a track record of community service, experiences caring for acutely ill children on inpatient rotations and a journey as a mother of a premature infant under her belt, Zapata’s vision for her future pediatric career started to come into focus.

In 2013, Zapata began her pediatrics residency at the School of Medicine and Public Health and UW Health, with the goal of becoming a neonatologist.

Reflecting on what she calls “amazing” training and support during those three years, she mentions one mentor in particular: Olachi Mezu-Ndubuisi, MD, OD, an assistant professor in the Department of Pediatrics’ Division of Neonatology and Newborn Nursery.

“She is an African American physician in the field of neonatology who I really looked up to and could relate with,” Zapata remembers. “She went through a lot of the same things I went through, and when I was feeling discouraged, she was there to encourage and help me.”

In her third year of residency, BRAVA magazine named Zapata a 2016 Woman to Watch, in recognition of her community leadership and commitment to improving the health outcomes of minority groups.

Around the same time, Zapata realized that although she enjoyed neonatology—and knew she belonged in pediatrics — she wanted to do more than care for premature babies after they were born. She wanted to help prevent them from being critically ill in the first place.

With that knowledge, she entered the School of Medicine and Public Health’s Master of Public Health Program and its Preventive Medicine Residency.

“During the Preventive Medicine Residency, I finally felt like everything clicked together,” Zapata says.

“Twenty percent of a health outcome is based on the care you receive in the hospital and clinic, but the other 80 percent is based on social and economic factors, such as your environment or personal health behaviors,” she reflects. “Drs. Remington and Pillai made that come alive for me. That residency program changed my whole life.”

During that residency, BRAVA profiled Zapata again, in an article on empowerment as a preventive strategy to address the infant mortality crisis for African American women in Dane County. She also wrote a book—her third—called Beyond Beautiful: A Girl’s Guide to Unlocking the Power of Inner Beauty, Self-Esteem, Resilience and Courage. It’s been translated into Swahili and Korean, and it is in the curriculum of schools in Madison, Verona, Beloit and Milwaukee.

Last year, Zapata spent numerous weekends traveling the Midwest on a seven-city tour, presenting the book’s content along with poetry, music and singing to connect with girls in a way not possible through a traditional clinic visit. She’s planning a 10-city national tour in 2019.

“If I can reach girls when they’re 7, 8 or 9 years old, and bring positive, uplifting support systems into their life at a young age, that’s potentially preventing so much [that can happen] 20 years later,” she says. “It’s more than a book and singing; it’s a community-based preventive approach to combating health inequities.” Zapata put her media-relations skills to use again when she had the opportunity to discuss her community health initiatives on the Today Show in November 2017.

“I was thrilled to share my message on live national television,” she recalls.

In 2018, Zapata became an assistant professor in the Department of Pediatrics’ Division of Neonatology and Newborn Nursery. As a hospitalist in the UnityPoint Health-Meriter newborn nursery, she cares for healthy newborns, attends high-risk deliveries, and if needed, transfers babies to the neonatal intensive care unit.

She also is an affiliate assistant professor (CHS) in the Department of Population Health Sciences, and she serves as the faculty director of the School of Medicine and Public Health branch of The Ladder, a national community-based mentorship and health education pathway program that aims to prepare young people from diverse, urban and medically underserved areas for health professions careers in their communities.

And as a School of Medicine and Public Health Centennial Scholar, she conducts research on prevention strategies to improve maternal-child health disparities. Most recently, she received a grant from the Wisconsin Partnership Program’s New Investigator Program to address inequities in African American birth outcomes in Wisconsin through a collaborative, community-based, culturally relevant model of prenatal care.

Specifically, she will determine the feasibility of implementing the Today Not Tomorrow Pregnancy and Infant Support Program (TNT-PISP), which combines community-based doula programs, group-based models of prenatal care such as Centering Pregnancy, and community-based pregnancy support groups — all led by women of color.

The project is based at the TNT Family Resource Center in Madison’s East Side Community Center, and carried out in close collaboration with Project Babies, Harambee Village Doulas and the African American Breastfeeding Alliance of Dane County, Inc.

For her work as an author, physician, health educator, speaker, youth empowerment specialist and community leader who is known locally and internationally, Zapata received The Business Forum’s 2018 ATHENA Young Professional Award in November 2018. The award actively celebrates the ATHENA mission of supporting, developing and honoring women leaders, inspiring women to achieve their full potential and creating balance in leadership worldwide.