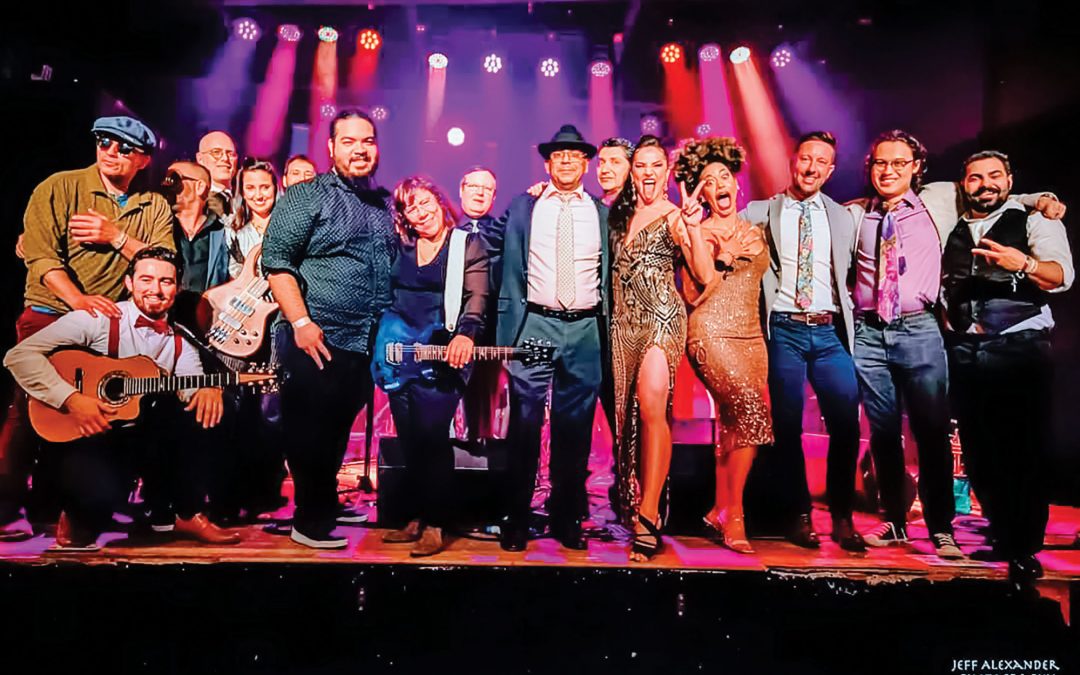 A Delightful Infusion of Latin and Soul

Ever been reluctantly dragged off the couch for a night out with friends and end up having the remarkably great time? A night of music at The North Street Cabaret might be ideal. On this night, the rhythms of Orquesta SalSoul Del Mad draws you in and awakens the soul! The music resides somewhere between R&B and spicy rhythms of Latin music, including renditions of legendary singers like Marc Anthony and Nina Simone.

Meet the man behind this rising 15-piece group who were first introduced to music lovers at the 2015 Latino Musical Festival in Madison. Alfredo Rodriguez, a military veteran and grandfather, turned soulful Latin percussionist. He also spins music on W.O.R.T. 89.9 La Junta.

Rodriquez describes this band this way: “You’ll notice that this band is all inclusive, not only our music but our musicians. Today we have musicians from Puerto Rico, Mexico, Germany, Portugal, Ireland, Dominican Republic, Italy, India and the good old USA.”

UMOJA: Alfredo, for the benefit of those that are not familiar with just who you are, can you give us a little bit of your background?

AR: I was literally born in a home on the South Side of Chicago right where the Chicago Bulls Stadium now sits on Paulina and Madison Ave. Soon after, my mom moved to the Northwest side of the city which is where I grew up along with a brother and two sisters. I had the great fortune of growing up during the 70’s when the music scene for Soul and Salsa was everywhere. Unfortunately, at the same time racism was evident almost everywhere and the only means of surviving my environment was to become part of a so-called gang, even if only by association. I can say that the Chicago Public School system failed me in many ways. Things became so bad for me while a senior in high school that I decided to join the military to finally graduate. The military gave me a sense of direction, discipline, and self-esteem. My life had a fresh new beginning, and I married my young bride who still stands by my side today. I have three children and a beautiful granddaughter, and I love them all dearly.

UMOJA: How did Madison become the place you call home?

AR: Coming to Madison 23 years ago wasn’t an easy decision but, in the end, turned out to be a blessing. We found our way here when my wife was thinking of going back to school to pursue a career as a veterinarian. We set out to look for schools and found that our two choices would be Champaign Urbana or UW Madison. While pondering this very big move, I knew it was time to go when one day, while sitting on my front porch, I saw a bunch of kids beating a young man senseless. I knew what was happening because I was once that young man. It was at that moment that I decided it was time to leave. I had survived the streets of Chicago but wanted better for my children. We moved to Madison for a fresh new start for our family.

UMOJA: What is the meaning of your band name?

AR: The meaning of the band’s name is very interesting. We play an infusion of Salsa and Soul, meaning we play music with Latin rhythms and English lyrics set to tunes we all have heard or are very familiar with. Young and old know our music. We do covers such as Michael Jackson, Adele, Paul Simon, Ed Scheeren, Lionel Richie, etc.… That’s why we have an Orquesta, which is a large group of musicians.

UMOJA: Tell us a little about the band and the SalSoul vocalists.

AR: With Madison being a transient city it’s difficult for bands to maintain musicians for long periods of time. We’ve been fortunate and to a certain degree have beat the odds because the level of the musicians we have, I believe, stems from our demand for excellence. We are patient but we also don’t just settle. You must be as good as the rest of us or better. You’ll notice that this band is all-inclusive, not only our music but our musicians. Today we have musicians from Puerto Rico, Mexico, Germany, Portugal, Ireland, Dominican Republic, Italy, India and good old U.S.A.

UMOJA: What’s the creative process like when creating a new song for SalSoul? Where do you normally get inspiration?

AR: Our process for creativity is simple. The hard part is putting it all together to make it all-inclusive. You’ll notice in our music that there is what we call a backbeat to the Latin rhythm songs we play. The drummer keeps a Soul beat behind the Latin beat that is being played. Sounds complicated but it’s not as complicated as you may think. We get cover songs then have them transcribed by several very good musicians that are a part of the “behind the scenes” contributors. After the song is transcribed, we add Latin beats and our own flavor which is where the creativity from all the musicians comes in. Our recipe for success is to include the entire audience.

UMOJA: Do you have any plans for an album/cd? And what is the best way to find SalSoul’s performance dates?

AR: We are trying to record a few songs, but the problem for us and probably most bands is money. One of our musicians, Marilsa Taboas, has a song she wrote titled Coffee Cup. This song has been in the Top 10 internationally in Broadjam Latin Rock for eight years running. She’s been saving up in the hopes of having this song released one day soon.

Having it done right will cost a great deal. Orquesta SalSoul Del Mad has been so busy we haven’t had the time to do any recording, but perhaps someday when things slow down a little, we will begin this project. If anyone wishes to follow us, we’re on Facebook: Orquesta SalSoul Del Mad, YouTube, website: http://salsouldelmad.wix.com/salsa, email is: Alfred_rod@charter.net or salsouldelmad@gmail.com, or you can reach out to me at 608-669-5579.