by Courtesy of The University of Wisconsin-Madison, by Doug Erickson | May 12, 2022 | Community Profile & Events | 0 comments 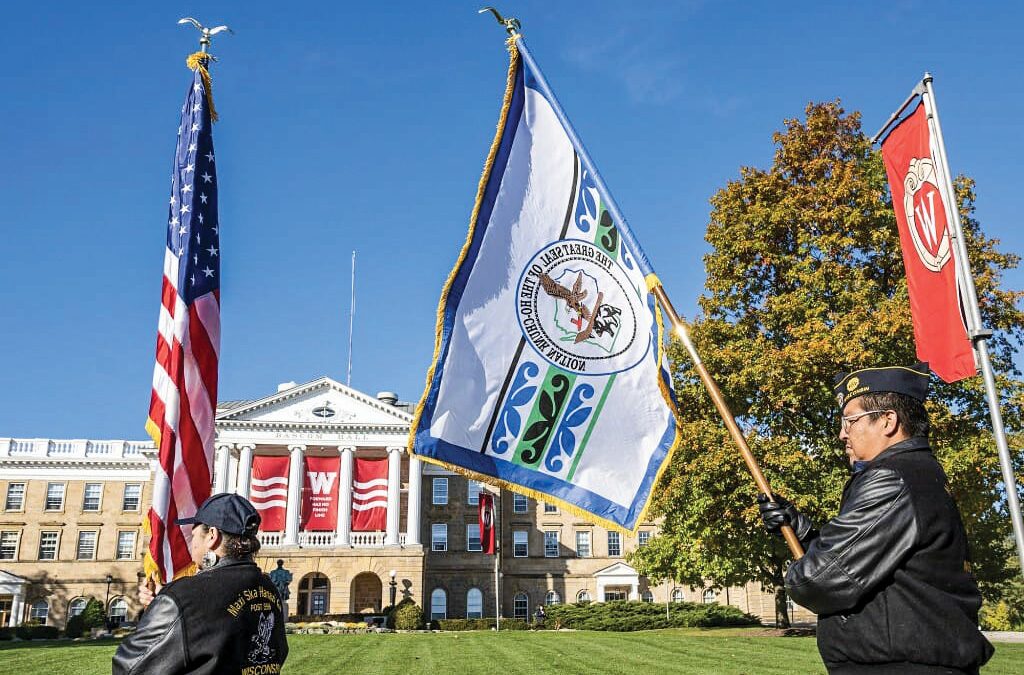 On a brilliantly lit fall morning, with an appropriate breeze in the air, the University of Wisconsin–Madison raised the flag of the Ho-Chunk Nation atop Bascom Hall on Nov. 5, on land the Ho-Chunk call Teejop, or Four Lakes.

The occasion marked the first time in campus history that the university has flown the Ho-Chunk Nation flag — or any nation’s flag — alongside the U.S. and Wisconsin state flags on UW–Madison’s central administration building.

Hundreds attended the flag raising ceremony on Bascom Hill, part of the university’s ongoing commitment to educate the campus community about First Nations history and to recognize the land as the ancestral home of the Ho-Chunk. Flag raisings are part of contemporary Ho-Chunk culture.

“Thousands of years before Europeans arrived here, the place we now call Bascom Hill was a sacred place for the Ho-Chunk people. They made this their home,” Chancellor Rebecca Blank said at the ceremony. “For many years, UW–Madison was not mindful of this history, and we paid little attention to our relationship with the descendants of those who were here long before us. But we are working to change that.”

Many in the audience had traveled far to attend.

“This is such a monumental moment,” said Jacquelyn Stacy, a student at Northland College in Ashland, Wisconsin, and a member of the Ho-Chunk Nation. “We are standing today on Ho-Chunk land, and it is important that UW–Madison acknowledges that. My hope is that other campuses will do this.”

The Ho-Chunk call the land Teejop (Dejope, or Four Lakes) in Hoocąk, the Ho-Chunk language. The Our Shared Future heritage marker on Bascom Hill recognizes the land as the ancestral home of the Ho-Chunk and acknowledges the forcible attempts to remove them. The marker pledges a shared future of collaboration and innovation with the Ho-Chunk Nation.

“Indigeneity is indeed a prerequisite for us to fulfill the mission of the institution to teach our students and community about the complex cultural, physical and natural worlds in which they live,” Aaron Bird Bear, UW–Madison’s tribal relations director, told the crowd. “I’m thankful that this event does just that. It helps us understand the cultural world of the Indigenous peoples who called this place their home for so long.”

Vice President Thundercloud shared some of the history of the Ho-Chunk Nation, including the fateful day in 1634 when a non-Native first set foot in a Ho-Chunk village. “This led to the occupation of the territory — treaties bound in blood but negotiated in bad faith,” she said.

The ceremony, she said, was both an acknowledgement of that history and a testament to the intertwined relationship between the Ho-Chunk and UW–Madison.

“This flag raising will enhance the conversation — as Chancellor Blank said while dedicating the heritage marker in 2019 — that moves us from ignorance to awareness,” she said.

Among those in the crowd was Ada Deer, the first woman to be appointed assistant secretary of Indian affairs in the U.S. Department of the Interior and the first Native American woman to head the Bureau of Indian Affairs.

“I was so excited when I heard about this ceremony,” said Deer, an alumna of the university who taught for many years in the UW–Madison School of Social Work and directed the American Indian Studies Program from 2000 to 2007. “It is so wonderful that the university is acknowledging the history of this land and the importance of the Ho-Chunk people. It will be very meaningful to Indian tribes, and I hope it is the impetus for other universities to do the same.”

Freshman Silas Cleveland, a Ho-Chunk Nation member from Black River Falls, Wisconsin, said flag raising ceremonies are more common where he grew up, so he didn’t fully realize the significance of Friday’s event until he saw it unfold.

“Seeing this flag raising gave me a sense of pride in my nationality,” he said. “I really hope this is the start of new beginnings and that it brings with it a stronger relationship with the Ho-Chunk Nation.”