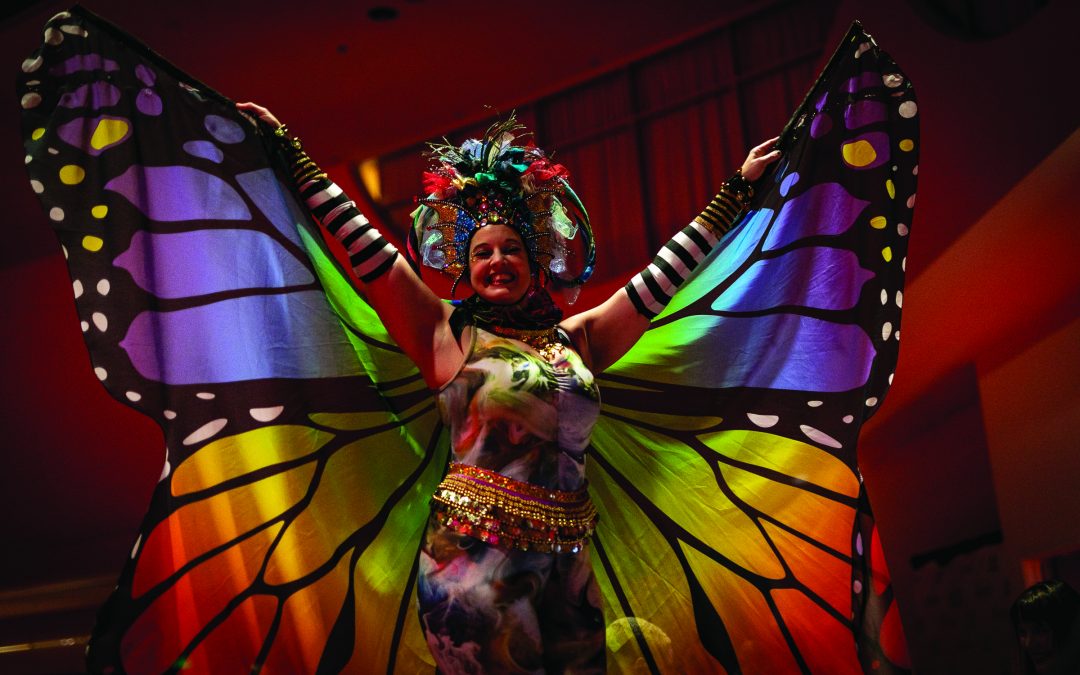 It’s not every Friday night that stilt walkers, spoken word artists and community service awards take place at the same event. But on a windy autumn night in October, all three, came together as the Urban League of Greater Madison celebrated another year of providing economic development leadership for the Madison community. For a split-moment, guests of the 2019 Urban Cabaret, may have forgotten that they were inside a ballroom at the Monona Terrace Convention Center. Your breath is taken away by what appears reminiscing of a time gone by once you walk through the doors.

Women in beaded gowns carrying half-filled wine glasses, strolled past a polished grand piano in a red and black glow of soft lights. Tuxedo-dressed men converse around a bounty of hors d’oeuvres and fruit trays, all while an aerial artist elegantly twists and moves from a swaying hoop in the air.

Tall-slender vases filled with plumes and twinkling candles adorn the tables as beautiful, silk clad butterfly stilt walkers, greet guests and pose for photos. Emcee George Smith, co-anchor of 27 News, introduced an eclectic group of performers including musicians, poets and a hip-hop interpretive dancer. It was certainly a night to remember.

This is the Urban League’s premier fundraiser. The unique and dynamic event is also a moment to spotlight the organization’s achievements, while thanking stakeholders who support the mission of educating, employing and empowering others to live well and advance professionally.

Donations assists the Urban Leagues efforts to connect people to life-sustaining employment. In fact, for every $2,000 received, a member of the community is trained and put to work, Anthony said. Urban League has a reputation as being the go-to organization for those in need.

“Whether you’re a homeless man living in his car until he finds a job; a young girl with no shoes on her feet looking for a bus pass; a pregnant woman stranded in Madison, simply trying to get back to Chicago; or, a newly released ex-offender needing his records expunged or adjustment to finding housing or a job … we see you all,” Anthony said.

He added that there’s still much left to be done. The U.S. unemployment rate might reflect the healthiest of job markets, but other evidence paints a less optimistic picture.

“Opportunities are still very limited,” Anthony added. “The notion of full employment is deceptive because many are working more than one job to make ends meet. The Urban League will continue to work hard to put people in sustainable-wage jobs so that don’t have to work more than one job.”

The head of the Urban League also presented The Whitney M. Young, Jr. Award to Greg Jones, president of the Dane County NAACP, and Nia Trammell, who joined Gov. Tony Evers’ administration this year and serves as the deputy secretary of the Wisconsin Department of Safety and Professional Services.

The Whitney M. Young, Jr. Award is given by Boards of Directors of Urban League affiliates across the country in memory of the great civil rights leader and former head of the National Urban League. Young was one of America’s most charismatic, courageous and influential civil rights pioneers. He worked tirelessly to gain access for African Americans to good jobs, education, housing, health care and social services. “No race has the monopoly on vice or virtue, and the worth of an individual is not related to the color of his skin,” Jones said. “This is a quote by Whitney M. Young in 1969, taken from his book Beyond Racism, Building an Open Society. I often reflect on this quote when I find myself in a moment of challenge while addressing issue of justice and equality that should have been eradicated during the 1960s.”

Jones said he is humbled to receive an award named after, Young ꟷ  a civil rights leader who spent most of his career working to end employment discrimination.

Recipients of the 2019 President’s Awardees, selected based on their exemplary service and partnership on behalf of the ULGM mission, were also recognized. Those winners include: the President’s Community Collaborator to Keetra Burnette; the President’s Rising Star Award to Alex Lodge; the President’s Grassroots Hero Award to Diane Small; and, the President’s Jobs Champion Award to Pat Schramm. The President’s Most Valuable Player Award was given to the City of Madison, which was excepted by Madison Mayor Satya Rhodes-Conway. “It is absolutely essential that we have organizations like the Urban League here in Madison to partner with,” the mayor said. “Former Mayor Soglin started this partnership and I fully intend to continue it because there’s a lot more work to be done together.”