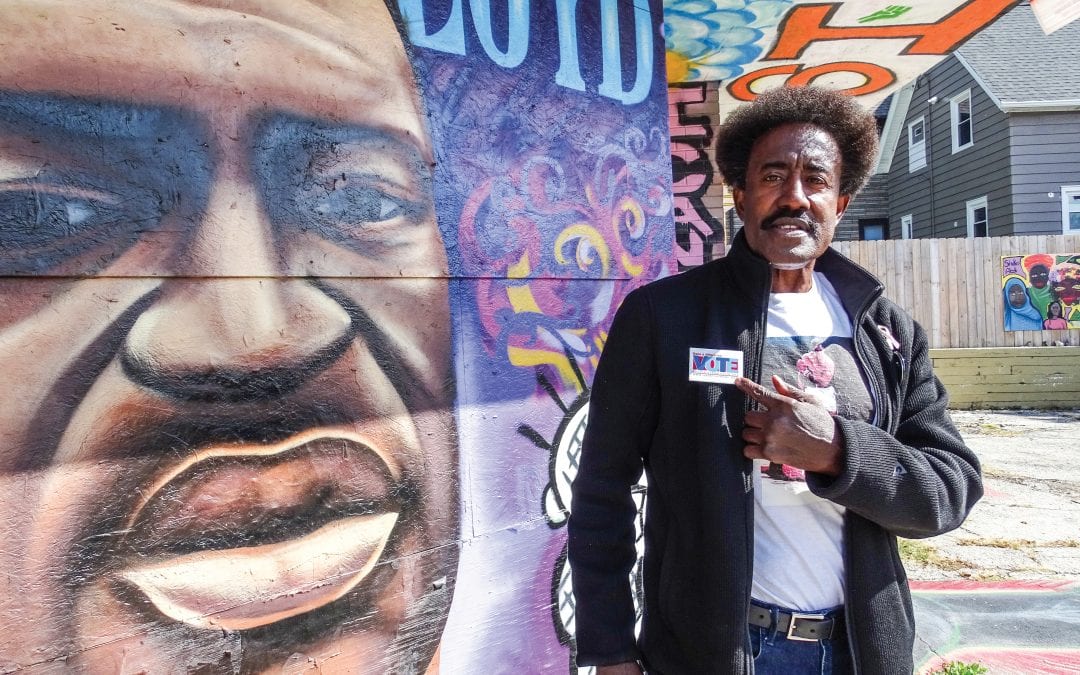 Black Americans Still Confront Roadblocks to the Ballot Box in 2020

Johnny Miller turns 70 on Nov. 1. The Milwaukee activist won’t have time for a big shindig to celebrate the milestone because his dedication to making sure Black and Brown voters have equal access to the ballot box comes first.

As the November election draws near and demonstrations for racial justice continue to unfold across the nation, exercising his power to vote is very personal.

Miller was born in Blue Springs, Mississippi during a time when segregation was the norm. The tiny town is 20 minutes outside Tupelo, known primarily for being the birthplace of Elvis Presley. Miller laughs remembering how his aunt would often babysit the future “King of Rock and Roll” and how the singer would buy pink Cadillacs for women he courted as a young adult.

Miller’s parents were hardworking. His dad, Troy Lee Miller, was a farm laborer who picked cotton and would tend to pigs and cows. His mother, Paris France Miller, also worked on the farm and cut up meat at Perdue Farms chicken plant.  Her father named her after the City of Love in honor of a favorite place he had toured while serving in World War II.

How Many Bubbles Are in a Bar of Soap?

Jim Crow laws kept the Millers from restaurants, bathrooms, water fountains, public parks, and swimming pools used by whites. Black men were lynched for sport. Those fighting for full citizenship rights were sent messages to stay in your place by means of cross burnings.

Mississippi’s strategy to disfranchise Black voters was accomplished by any means necessary. Ill-meaning registrars would enforce obscure literacy tests, along with requiring outrageous poll taxes. In some states, in order to vote, Black people had to know how many bubbles were on a bar of soap or how many jelly beans were in a jar.

“I know firsthand what my family went through simply to cast a ballot,” Miller said. “Our vote has been suppressed since we were considered three-fifths of a man.”

The family migrated to Racine in 1950 when Johnny Miller was just 4. His dad landed a better-paying wage job with J. I. Case Company, assembling tractors for the farm equipment manufacturer. Miller, who calls himself “a very lucky man” received his draft papers to join the military when he was 18. The Vietnam War was underway. Evidence of a bad knee turned up during physical examination, excusing him from enlistment.

The fortunate circumstances allowed Miller to attend Marquette University in pursuit of a better life than what his parents had to endure. Besides, many of his friends who served in Nam either died or came back struggling with severe mental issues.

Miller voted for the first time at 19. Since then, he has rarely, if ever, missed the opportunity to exercise his power to vote.

Dear Young Voters: Vote Like Your Life Depends On It

Wisconsin is a battleground state and presidential candidates are wooing voters for support. Cities like Milwaukee, Kenosha and Racine, meanwhile, are working to reverse a troubling trend in voter registration. In 2016, the Black voter turnout was down 20%, and Latino voters dipped by 6%.  And if that weren’t enough, the coronavirus pandemic has turned everyday living topsy-turvy.

“I know over 20 people that have died from COVID,” said Miller, adding Black voters are fearful of being exposed to the virus through in-person voting. “Do we have to die to vote? Why put your life on the line to vote (in person)? It’s ridiculous.”

Now that he’s entering his twilight years, Miller said his race, age and heart condition make him a prime target for COVID-19’s morbid grip. As a precaution, he has replaced neighborhood canvassing and cookout registration drives with Zoom events and telephone calls to wrangle excitement for voter participation. He never leaves home without a face mask.

A retired annuities specialist at Northwestern Mutual, Miller is also excited by real-time technology that allows him to track his ballot online at MyVote.wi.gov.

Voter suppression, however, is an issue that has a lengthy and weighty history in the nation. Miller said it continues to rear its ugly head today, it’s just cloaked in a different shroud. Racially biased election laws, the state’s voter-ID legislation is a prime example.

Convincing young people to vote frustrates Miller the most. There seems to be a disconnection between the struggles Black people endured to earn the right to walk into a voting booth, and what’s deemed important now. Several youths today chase money in hopes of living the life of the celebrities they follow on social media.

Miller refuses to give up.

“The elders have the responsibility to teach the younger generation about our past history of struggle and achievements in America,” Miller said.

He can relate to the anger and frustrations spurred when a white Minneapolis police officer killed George Floyd by kneeling on his neck for nearly nine minutes. The horrific slaying seen across the world became a catalyst for a civil uprising.

“When I was 16, I was nearly choked to death by a cop,” Miller said. “He beat the hell out of me and held me in a choke hold. I was part of a march at Humble Park in Racine to protest the construction of a brand-new recreation center in a predominately white neighborhood.”

Young people today are inspired to make a difference in their communities because of Floyd’s death. But many struggle with which is more powerful: voting or protesting?

In the early days of the civil rights struggles, most of the marchers, most of the protesters and most of the Black community activists were young people. Miller said some of those young activists, ready to carry the torch for justice, can be found around Milwaukee.  He referenced Frank “Nitty” Sensabaugh who lead a group that marched 750 miles, from Milwaukee to Washington, D.C., to protest police brutality.

“Many of the young adults are my heroes for peacefully marching, putting their lives on the line and never giving up the fight for full citizenship…,” Miller said. “The youth will be the real superheroes by using their power to vote on Tuesday, Nov.  3rd, 2020. They can help change the world to be a better place for all people to live.”