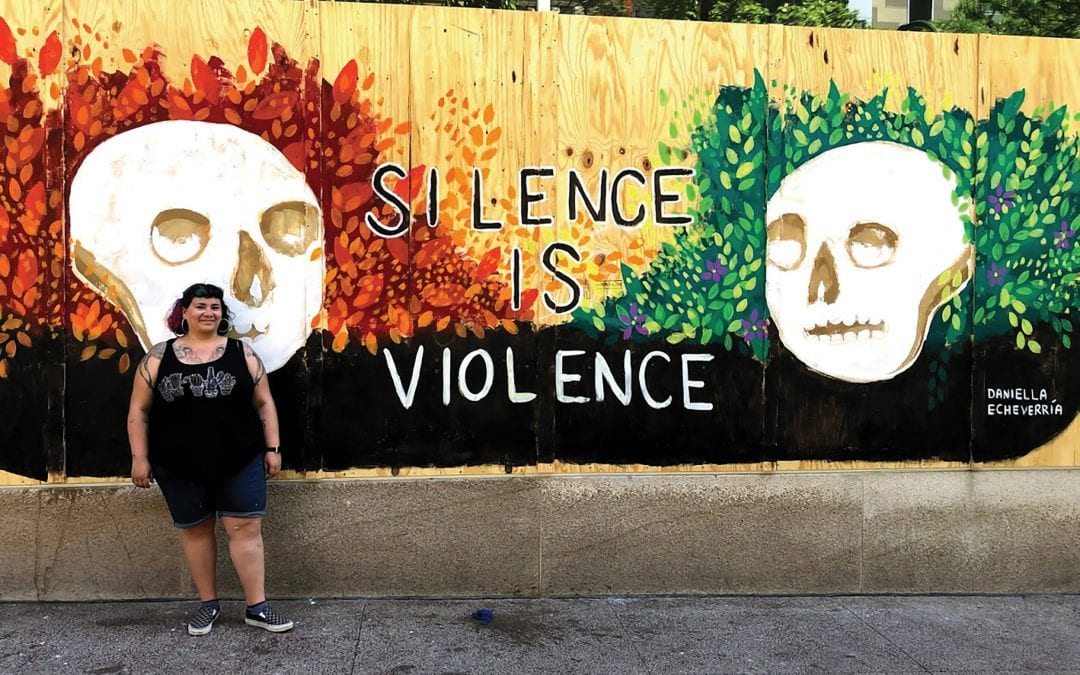 It took 8 minutes and 46 seconds for Minneapolis Police Officer Derek Chauvin to murder George Floyd on May 25. We all have witnessed the protests that followed, including in Madison.

The city asked me to paint a mural on the boards that had been used to protect the windows on State Street. I feverishly researched “how to paint a mural” on YouTube because, perhaps the city had no idea, this would be my first mural. I had sketched some ideas the night before and decided on the words that morning, June 2: “Silence is violence.”

I’ve been making art since I was little. I always thought I was going to be an artist when I grew up, and when I graduated high school I decided to major in illustration at the University of Connecticut. After two years I decided it wasn’t the right place for me, and moved to Madison when I was 19. I wandered around in the way that you do in your early 20s, drifting from job-to-job until my mid-20s when I went to Madison College for a degree in graphic design. I’ve enjoyed a successful career as a graphic designer in the Madison area, but something in me itched for something else that would help me contribute in a meaningful way — so I decided to return to school in my early 30s, and graduated in May 2020 with a degree in horticulture from the University of Wisconsin-Madison. Art is how I make sense of the world. And horticulture is how I hope I can change it.

To quote Facudo Cabral’s amazing song, “No soy de aquí ni soy de allá.” I’m not from here, and I am not from there. I am a biracial woman who grew up in a predominantly white neighborhood in southeastern Connecticut. My father was a Guatemalan immigrant who met my mother when he was a foreign exchange student at her rural high school in central Wisconsin. I have always known privilege. I have always felt “American,” but just happened to celebrate holidays that none of my friends did and spoke Spanish at home. I truly do not know how my race is perceived by others, and it’s been something I’ve always had a hard time processing. P.S. For anyone who doesn’t know — Guatemala is not in Mexico. It’s a whole other country.

Through earning my horticulture degree, I learned about ecological succession. How fire can burn down a forest and give birth to new life. Rebirth and renewal. My painting is about that rebirth, but at the expense of Black and Brown bodies.

My excitement over my first mural and the impact that I hoped it would bring was quickly smashed. Nearly everyone who approached me and commented on the painting kept saying things like, “thank you for trying to make peace” and “thank you for making something beautiful out of something ugly.” I know they were well intentioned (the road to hell, etc.,) but f*#@ that. I did NOT paint the mural to make State Street “pretty” or “palatable” to white people. White people should have had to sit with discomfort of smashed windows. My only regret is not painting the words on the mural earlier in the day. At the end of the day, once the words were marked out, a woman said to her friend in a pompous tone, “I thought this was supposed to be all positive murals” within earshot of me. And I’ve come to realize that that’s exactly what Madison wants, too.

I did not paint this to make white people feel better. I did not paint this mural so that nearly every media outlet would cut out what I said about this mural, which was that white people have to think about how they perpetuate white supremacy. About how cops murdering Black people is government-sanctioned lynching. I’m not sorry if that makes you feel uncomfortable. Do some homework and look up the population rates vs. the incarceration rates in Madison. White people (including white liberals) have been complicit. Why? I don’t know why. That’s where you come in. Try to do some self-reflection. Ask yourself, how do you contribute to white supremacy? How can you do better?

That was the point of my mural. To try to get people to examine their inner racist. To ask white people to use their privilege to protect Black and Brown bodies. Ask Black leaders what they need from you. The responsibility is on YOUR shoulders to fix this. Black and Brown people already know how to fix this, so ask them how. And listen. And do. Donate. Participate. Do not speak on top of Black, indigenous and people of color, but do not remain silent.

(This editorial was originally published in The Capital Times on June 12.)

Daniella Echeverría is a horticulturist and artist living in Madison. She spends most of her time making things and doing her best to learn something new every day. A different version of this column first appeared on her website (http://honeybeestud.io/hello), where she is selling postcards featuring the design of her “Silence is Violence” mural. All proceeds will go to Freedom Inc, a Black and Southeast Asian non-profit organization in Madison that works with low- to no-income communities of color. 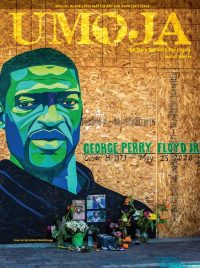