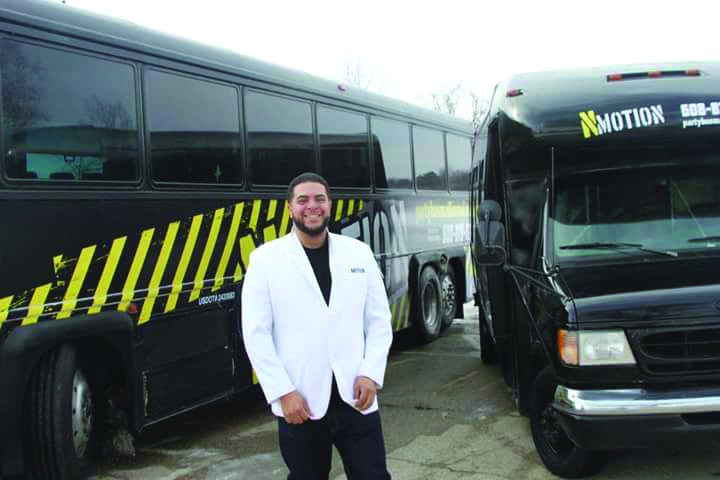 Hours after receiving the Healthcare Company of the Year Award from the Madison Black Chamber of Commerce Black Business Awards Recognition & Exhibition, Joseph Durruthy turned to social media to share his personal journey with hopes of inspiring others to recognize if he can make it, they can, too.

Durruthy had many opportunities to remain in the streets and earn a living illegally. The money came easy. But, having a child, and a self will run riot, set him on life’s right path.

Today, he is the CEO of N Motion Medical Transportation, a company he founded in 2015.

“We are the VA Hospital’s number one vendor in Madison,” Durruthy said. “We also work with UW, Meriter, St. Mary’s and multiple dialysis companies and nursing homes.”

The road to success was far from easy.

When Durruthy was born in 1984, his Afro-Cuban father was in prison for assault with a deadly weapon. While serving time in a Wisconsin correctional institution, his dad even tried to snuff the life out of Jeffrey Dahmer, the notorious Milwaukee serial killer whose modus operandi was rape, necrophilia and cannibalism, among others. Dahmer reportedly indulged in morbid jokes and taunts that linked to his past. Durruthy’s father was disgusted.

“He got a piece of a plastic fork and made it into a knife and attack Dahmer in the prison’s chapel,” Durruthy recalled. “He tried to cut his throat. Luckily, he did not kill him.”

Durruthy’s mother was a crack addict. Gang members were his neighbors on Madison’s southside. The only role models were the dealers who had stacks of cash.

“In 1993-94 we moved to Eric Circle and looked up to the older guys selling drugs,” said Durruthy. “My cousin and brother were selling, too. Based off what that looked like, me and my peers would break a piece of drywall off the walls and sell it like it was crack. It worked. We basically ripped them off for $20 a bag.”

An attempt at a “normal” job, working at a fast-food restaurant resulted in small paychecks. So, he went back to what he knew best, selling narcotics. Realizing that his street game is similar to running a company, Durruthy and friends launched S.E.T. Entertainment, which married partygoers to local venues. It was successful for a while, until similar groups emerged, and venue operators discouraged rambunctious events on their properties.

Having A Child Changes You

Durruthy became a father for the first time on Oct. 7, 2007. Holding his son stirred something inside of him. He decided right then and there to live his best life.

“It was a pivotal moment in my life,” he said.

Four months later, Dane County Sheriff’s Deputies kicked in the front door to Durruthy’s apartment and arrested him on suspicion of drug trafficking. A conversation over the officer’s radio caught his attention. A baby was found unresponsive.

“I remember the sergeant looking at me, while I was in handcuffs, saying ‘See, your case could be a lot worse,’” Durruthy recalled. “I said yeah, that’s messed up. Come to find out that, that baby we heard about over the radio was my baby.”

Compassionate officers escorted Durruthy to the hospital. Still in handcuffs, he was allowed to be at his child’s side before being taken to jail.

Hours earlier, Durruthy and his son’s mother were out separately with friends on Valentine’s Day. The mother left the infant with his grandmother. During the early morning hours, she picked up her child, but decided she was too drunk to drive. So, she parked the car and left it running for the next four hours.

Found listless and his skin blue, the infant died hours later from post-cardiac arrest after becoming overheated in a running car. He was strapped in a car seat wearing a coat and covered with a blanket. The boy’s mother was charged with neglect and sentenced to five years of probation.

Failure is Key to Success

Durruthy was determined more than ever to turn his life around. One business effort after another failed. A trusted business partner even ripped him out of $33,000, he said.

Using earnings from the party promoting, he purchased a 17-seat shuttle bus from Minnesota to assist people going to and from his events. After coming up with the name of NMotion he and a friend worked day and night building up a trustworthy and reliable reputation. And it worked.

A few years later, Durruthy received a tip urging him to expand the transportation company to include shuttling patients to and from doctors’ appointments paid off. It just so happened that one of the four buses he purchased was equipped with a wheelchair lift. The advice paid off, and the rest is history.

Now, a father of four with a fiancée, Durruthy said his N Motion Medical Transportation grosses between $30,000 to $45,000 a month. He said there’s much more to his story, including how he and his father are now establishing a growing relationship since being released from prison. He also wants to author a book sharing many more life lessons.

“Honestly, it takes less than $200 to start a business,” Durruthy said. “From there it’s all about growing and having the right people around you.

Durruthy and his businesses can be reached at www.nmotionmedicaltransport.com/.