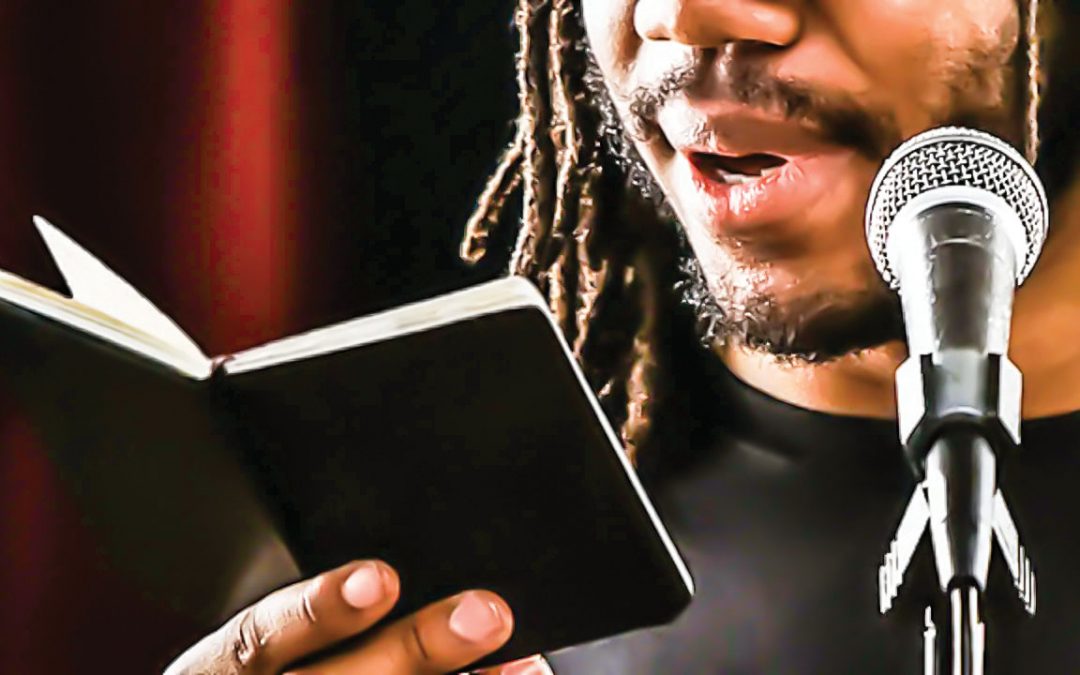 Whether contemplating the Black experience through poetry, novels, articles or books, Madison plays host to some amazing writers. In this article, we’ll share just a handful of the many talented Black Writers and Poets Madison has to offer.

Poetically Pushing for Progress: 5 Black Madison Poets Who Are Pushing the Envelope on Empathy

Sasha Debevec-McKenney is the first Dane Arts-funded Artist-in-Residence at StartingBlock Madison. She was recently featured in Madison Magazine for her poem, “A Love Poem”. Debevec-McKenney isn’t a Madison native, but she’s lived here for 8 years total (although at two different times), working at places like Willy Street Co-Op and Morris Ramen. In 2020, she applied for the internationally competitive fellowship from the University of Wisconsin–Madison Institute for Creative Writing and became one of only two poetry students who get admitted each year. Another piece by Debevec-McKenney that made a splash was, “Kaepernik”, which was included in the November 2021 issue of The New Yorker. What’s next for this Madison-based wonder? She is finishing up a poetry manuscript, while simultaneously writing a nonfiction book about visiting all of the presidents’ graves.

T.S. Banks seems to be everywhere in Madison. Whether it’s running Open Mics and Writing Workshops with their Loud ‘n’ Unchained Theater Co. at the library or hosting their own events, their work as a Black & QTDisabled, non-binary teaching artist, poet, and playwright challenges the status quo and pushes for Black liberation. In Spring 2022, their latest poetry chapbook “Split” was released, including poems about surviving the psyche ward, resisting ableism and internalized ableism, surviving service agencies, church, and psyche institutions. Their unique perspective produces one-of-a-kind work that all of Madison benefits form.

Erick Blue is a Madison native and author of a poetry collection called “Skin of the Sun” that honors the black story by reflecting the black struggle and its pain while still offering optimism and truth. By day, Blue works as a Behavioral Specialist for Madison Metropolitan School District, but his creativity comes out in more ways than just poetry during his off time. He is also a painter, social justice advocate, and musician.

You may have seen Charles’ name pop up in local publications around Madison, including Isthmus and Madison Magazine. Charles is a poet first and foremost, but has recently expanded to writing essays that delve into his personal experiences growing up Black, teaching in different states across America and learning – and learning to love – Madison as his home city. Charles published his own chapbook entitled “Love, Payne, Hate and Adversity” and recently won the Arts + Literature Lab Originals Prize for his poems “Dead End” and “Dinner with a Pig”.

Rene Simon is a queer artist and writer of African, Native, and European-American descent with a recently published chapbook called “The Good Truth”. Simon lives locally and has also been recognized by the Arts + Literature Lab for their poem “Second Harvest”, which was chosen as the winner for the 2021 ALL Favorites contest. She has been published in the Terra Preta Review, The Green Light Literary Journal, Blue Literary Journal, Electric Moon, Bramble Literary Journal, and Literary Mama.

Writing the Way Forward:  5 Black Madison Writers Invest in Community and Encourage the Next Generation

Sherry Lucille is a local romance writer who just released her fourth book, “Falling”. Lucille wrote a trilogy (The Love Trilogy) that shares the story of an interracial couple that begins in the 1950s and spans decades. The new novel, “Falling” was just published in July 2022 and focuses for the first time on a Black-on-Black love story set in a fictional town in Tennessee at a Black Christian college in 1970. Outside of her writing, Lucille served as a guidance counselor in the Madison Metropolitan School District for 28 years and has also been a life coach and motivational speaker. In 2016, Lucille was honored with the YWCA Madison Women of Distinction award.

Although Dasha Kelly Hamilton is a well-known name in the poetry scene in the state of Wisconsin, it’s too simple to just call her a poet. A writing jill-of-all-trades, she has penned two novels, three poetry collections, and four spoken word albums. Kelly Hamilton has also written a play, entitled “Making Cake”, which tours and showcases how one baked confection illustrates the differences in race, class and equity that abound throughout American history. Kelly Hamilton currently serves as both the Poet Laureate for Milwaukee and as Poet Laureate for Wisconsin and it’s NOT oversimplifying things to say that she seems to embody the charge of her office to be a “statewide emissary for poetry and creativity”. Outside of Wisconsin, Kelly Hamilton is also an Arts Envoy for the U.S. Embassy, and has facilitated community building initiatives in Botswana, Toronto, Mauritius, and Beirut.

If you haven’t run across something that Rob Dz is doing in Madison then you have been completely hiding out. Dz has been a staple of the Madison hip-hop and spoken word scenes for decades. He is currently hosting the Mad Lit music series downtown, but people may not be as familiar with the weekly Spoken Word Night at Cafe Coda where he himself sometimes performs his own pieces. His hip-hop background means he has been writing and producing his own music for years, as well as having performed with top names like Common, Talib Kweli, Nas, Eminem and more. What a lot of folx don’t know about Dz, is that he was inducted into both the American Folklife Center at the Library Of Congress and The National Museum of African American History and Culture as a member of The Story Corps program in 2017.

Rachel Werner is the founder of The Little Book Project WI as well as a teaching artist for Hugo House, The Loft Literary Center and Lighthouse Writer’ Workshop. In addition to writing her own books, recipes, and poems, Rachel is also one of those exceptional people who truly wants to give back to the community. Werner created The Little Book Project WI to highlight social issues locally and “provide a platform for artists from a variety of disciplines—especially those who have encountered barriers to their work being accessible to a wider audience.” The Little Book Project also weaves together visual and literary arts in a unique way. Werner’s own writing includes regularly contributing content to TheKitchn, Spruce Eats, Mother Untitled and Fabulous Wisconsin. A selection of Rachel’s recipes are also included in the book “Wisconsin Cocktails”—and her poetry in “Hope Is The Thing: Wisconsinites On Hope and Resilience in the Time of Covid-19.” Her debut science book for kids “Floods” is one of the titles in Capstone’s new Wild Earth Series and was recently featured at the Wisconsin Book Festival.

Many people know Martinez White as a fun-loving Madison-based DJ, but there’s more to him than just music! Martinez White wrote and published “Think Like A DJ: 7 Steps to Spin Poverty Into Prosperity,” in August 2020. Speaking specifically to Millenials, White shares his tips and insights for how to create a successful life and a successful business in the book. His signature phrase, “Dreams Are Made To Be Achieved” is core to his philosophy, and it’s more than just talk. White is the founding member of the Wisconsin Association of Black Men, & CEO of his own multi-media company called Intuition Productions, LLC. On his website, he says the book is “Written with people of color, the LGBTQIA+ community, and women leaders in mind, this book serves as a pillar of support for emerging voices and emerging communities.” Martinez White has also developed a Think Like A DJ coloring book that he and his son created together!