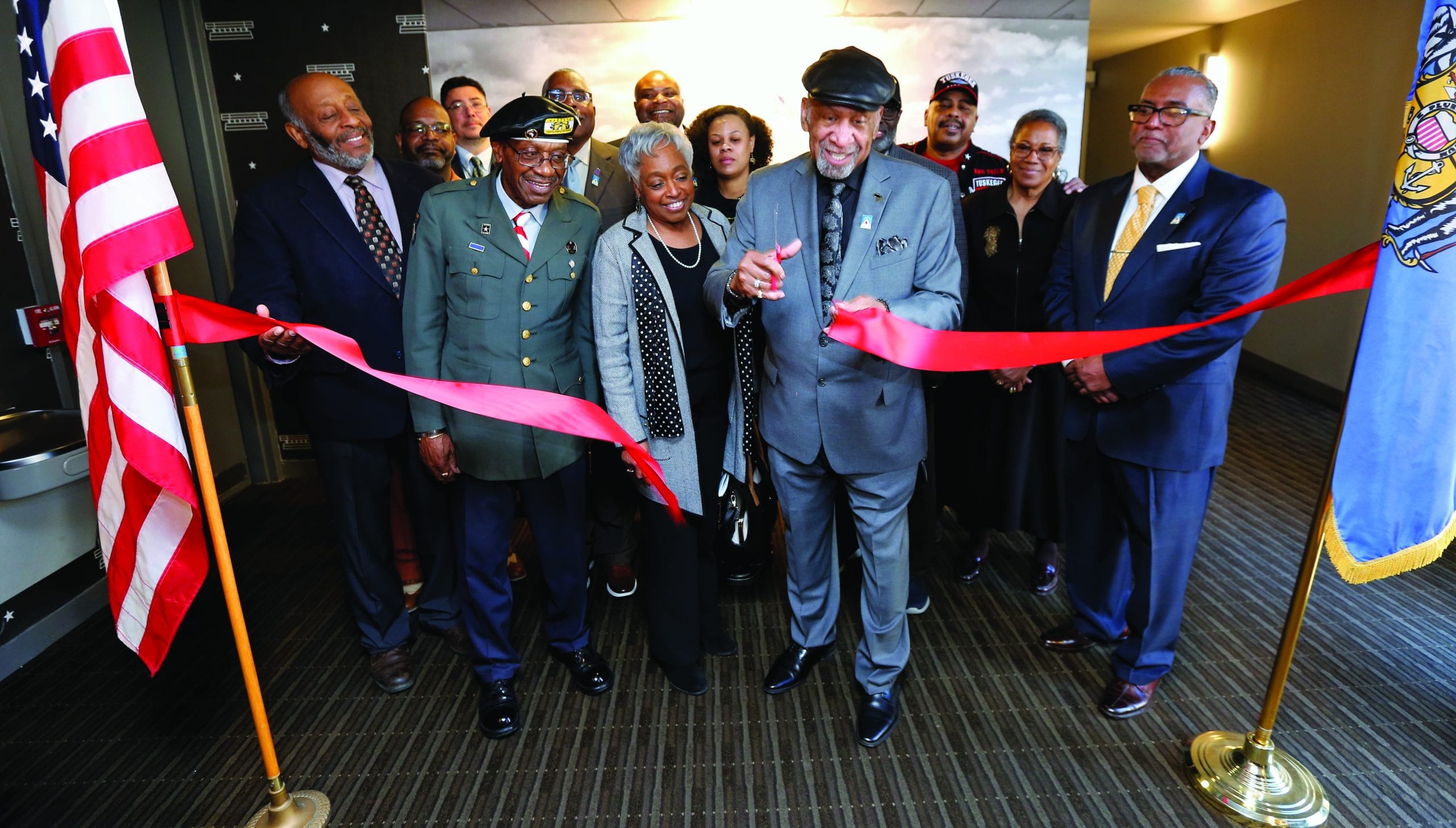 African American men and women in the armed forces, past and present, are being honored in a new mural at the Milwaukee County War Memorial Center. It’s the first work dedicated to black veterans in the war memorial’s 62-year history.

Dozens of veterans, military families, and others gathered for the mural’s unveiling on Feb. 3.

The mural takes up an entire wall along one hallway on the fourth floor of the war memorial. It celebrates black people who served in the military as far back as the Revolutionary War, and features dozens of images and photos.

Otis Winstead is the executive director of Great Lakes Dryhootch, a nonprofit veterans organization. He says he’s filled with pride seeing the faces of those who came before him. And he hopes others who view it have a similar experience in the years to come.

“It’s about the future generations coming here and being able to see images of themselves, that’s real important,” Winstead says.

He’s a Vietnam veteran, and recalls walking through the war memorial never seeing an image of other black vets. Like Crispus Attucks, who’s featured in the mural. Attucks was the first African American who died during the Revolutionary War.

“We have stood on his shoulders, along with the Buffalo Soldiers, the Tuskegee Airmen, the 6888th which was a World War II all black women’s battalion that was in charge of the mail. So, yeah it’s prideful to be able to look at that,” he says.

Winstead hopes when people visit the war memorial and see the new mural, they’ll understand the significant role African Americans have played in the armed forces.

Many of the people who attended the mural’s unveiling say the moment was long overdue, like George Hinton, the CEO of the Social Development Commission. Hinton is also a Vietnam veteran, and comes from a family with generations of service in the U.S. military.

“This is really a recognition for the folks who did contribute to serving our country, but also to show our community that we should stand tall because we are contributing too,” Hinton says. “This is our country, we put blood on the line, we have bled for this country, so we have to not only show that but also expect that our country recognizes that all the time.”

Hinton says he looks at this moment as especially important for young people and hopes this will lead them to see military service as option. That being said, he also acknowledges that military service may not be for everyone. But knowing that black people were and are present in the military is vital.

“Everyone doesn’t need to serve, but we all need to know that we did. So, stand proud as an American because we serve for us all,” he explains.

Crispus Attucks is the largest image in the center of the mural, surrounded by photos of service men and women — some pictured in the field, or on military bases. There are images and descriptions of the veterans from Wisconsin. Some of the figures included are: William A. Taylor, former anchor/reporter for WTMJ; Marvin Pratt, former Milwaukee mayor; Clayborn Benson III, executive director of the Wisconsin Black Historical Society; and Marcia Anderson, the first black woman to become a major general in the U.S. Army Reserve and the event’s keynote speaker.

Lisa Harmon and Mildred Yantin, who both work with the Centers for Veterans Issues and have relatives who served, were at the unveiling of the mural.

“I have a nephew that’s serving right now in the Army, and to see this and for him to be able to experience this in 2020 — where it’s been a long time since they done it, but for them to finally do it — it’s awesome and I know he’s gonna be very proud and all the veterans are very proud of this memorial here,” says Harmon.

Yantin says it’s an honor to be a part of this moment.

“Without shedding tears, it’s emotional, you feel like the moon you know: One great step … one step for man … you know what I’m saying, right?” Yantin says.

Now, she says, black families can come to the war memorial to learn their history and acknowledge black veterans’ service.