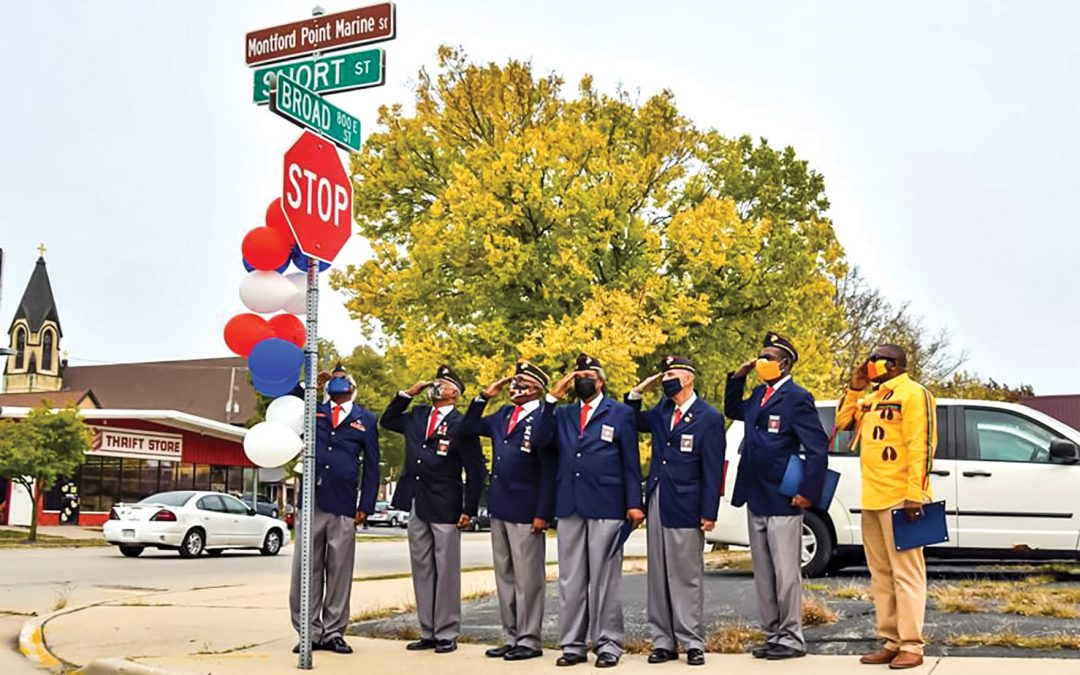 A group of Black veterans were honored on Sept. 26 in Beloit with a street designation recognizing their role as vanguards for people of color now serving in the military.

The chapter office of the Beloit-Rockford Montford Point Marine Association, the first Black Marines to serve in the military, once stood at 201 Short St. in Beloit.

Their legacy was on full display for the community as an honorary street sign was unveiled for all to see.

A brown historical marker bearing the words “Montford Point Marine Street” was affixed to the top of the existing traffic sign at the intersection of Short and Broad streets.

The Beloit City Council approved the street designation at a meeting on Sept. 8.

Montford Point Sergeant at Arms Stanley Thompson said preserving the veterans’ legacy was paramount in honoring the past tribulations faced by the Montford Marines.

“This is about people coming together to recognize and say ‘thank you’ to these men for enduring discrimination while serving their country with distinction,” Thompson said.

Thompson added he hoped the event would show the community that people can put political partisanship aside to support service members.

“We want to unite as one people,” Thompson said. “We can’t undo history. We can only try to move forward to give some repair to that damage. We can change how we treat one another and how we value each other.”

“They served honorably and gave the ultimate sacrifice to a country that did not necessarily give back to them in return,” Williams said. “…We are proud to say that this is the first and only street in the nation that is named honoring the Montfort Point Marine Association. It is a good day in Beloit and a proud moment in American history.”

“…I am so proud to be hosting our event today right here in Beloit honoring all Montford Point Marines and those dedicated to preserving their legacy,” Dunkin said.

Between 1942 and 1949, around 20,000 Black men completed recruit training at Montford Point at Lejeune, North Carolina during a time in which the military was still segregated. Despite the challenges presented to the Montford Point Marines served with valor, loyalty and service in the face of discrimination and paved the way for the current integrated armed forces.

In the summer of 1965, more than 400 former and active Marines attended a reunion in Philadelphia and the association, a nonprofit organization for veterans was formed.

The latest recognition for the Montford Point Marine Association comes just over a year after Ogilby Road was dedicated in honor of Homer Hempstead, Rockford’s first Black Marine who passed away in 2015.

The National Montford Point Marine Association is open to all military veterans from all branches of the military.