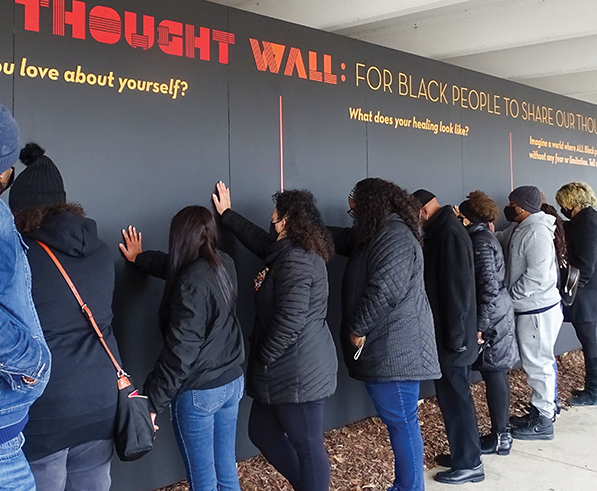 A Sanctuary for Black Expression

Imagine living in a world that holds thoughts of Black people in the highest regards. Can you see it?

The Black perspective ꟷ what’s valued and what’s envisioned for the whole of humanity ꟷ  are the authentic narratives being shared through words and images on a newly constructed Black Thought Wall on Madison’s South Side. The mural size blackboard, tucked behind a row of pillars on the north side of the Villager Mall of South Park Street, was dedicated on Oct. 19 by the YWCA Madison.

Messages like “Freedom! Tap In”, “Equality”, and “Black women would run the world, written by a Black man” are already scribbled on the wall.

In partnership with YWCA and the Madison Arts Commission, the Black Thought Wall is the first created outside of California where the project founder, Alicia Walters, erected the creative piece in Oakland, California. Walters, an artist, activist, and facilitator, designed the space for Black people to dream and shows allies how we can all witness, honor and protect those dreams.

The idea of having the Black Thought Wall in Madison sprouted during this year’s YWCA Racial Justice Summit, titled “Reconstruction. Centering Blackness – A Path to Build Collective Power and Justice for All”, where Walters was a guest speaker.

“We transform public or private spaces into sanctuaries for the expressions of Black thought,” said Vanessa R. McDowell, YWCA’s CEO who held a special ritual inviting the ancestors into the space. “We envision communities where Black people are given safe spaces to reflect, be listened to and to be honored for their experiences and perspectives.”

The Black experience, McDowell added, is sacred and worthy of protecting. Black people are encouraged to express what they love about themself, what healing feels like, and what a world where ALL Black people are safe and free would look like.

“Like Oakland, Black people in Madison have long endured a steady diminish of our presence … and appreciation of our creations,” McDowell said. “The Black Thought Wall is reclaiming our space, reinstalling the voices and experiences of Black people as central to Madison’s present-day story.

“The Black Lives Matter window signs are not enough to protect our thoughts, let alone our lives. More is required of our non-Black friends, neighbors, businesses and elected officials,” she added, remembering how the legacy of African Americans have been stolen by slavery, Jim Crow and systematic inequities.

Located at 2210 South Park St., the wall will be accessible to the community in this location for one year. 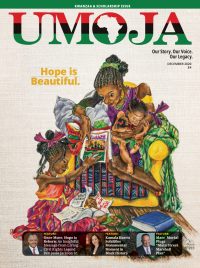