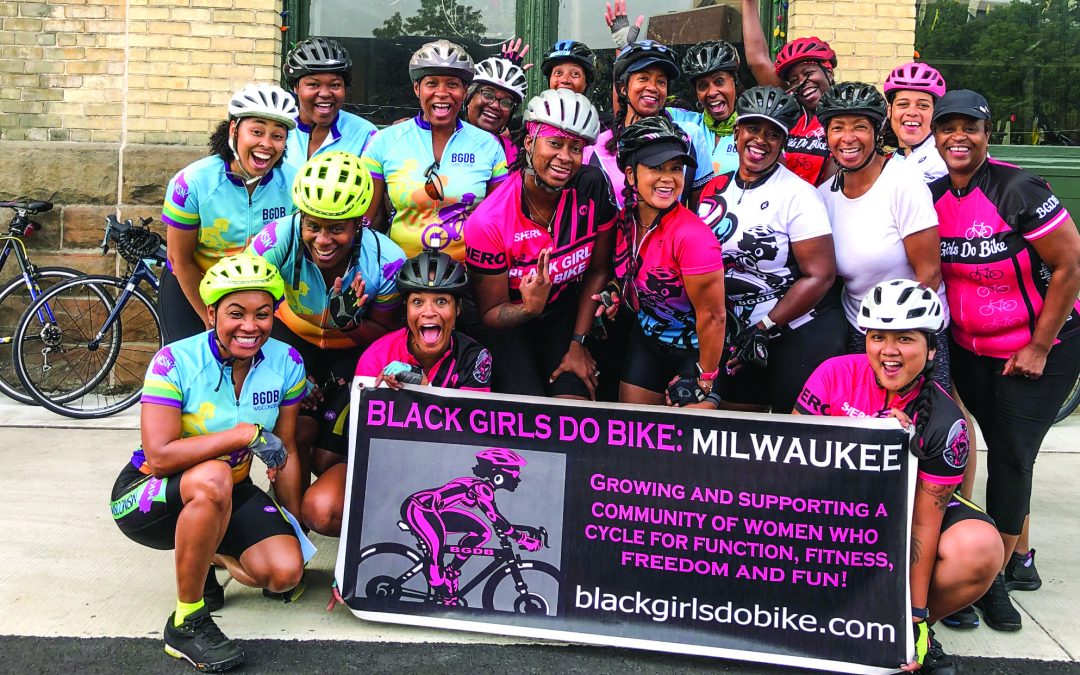 On the Same Path, In More Ways Than One “Can I borrow your tire pump?” one asked.

“Does everyone have enough water? Last call for water!” another asked, holding a thermos above her head.

“I’m ready to do this,” another gleamed, while securing a helmet over her handkerchief covered locs.

Defy the stereotypes of what a cyclist should look like, these two-wheeling enthusiasts were a sight to behold: They’re all women. They’re all African American. And they’re all fierce members of Black Girls Do Bike (BGDB). Madison and Milwaukee chapter members geared up for a trek around the state capital’s renowned bike trails.

And, boy did heads turn. … That was the point.

Cristina Outlay and Sarrut Ouk started the Madison chapter of Black Girls Do Bike out of necessity nearly four years ago.

“I was new to riding and many of the women’s riding groups out here are very experienced,” Outlay recalls. “So, when you’re brand new with very little endurance, and you’re a black woman, you can’t help but feel out of place. It was just a whole bunch of variables that made it feel kind of unwelcoming. So, I wanted to start a chapter here to get more women out so we can ride and have a more collective group.” Black Girls Do Bike is a grassroots movement that seeks to create a supportive place for female cyclists to grow, build friendships, and explore a world outside their comfort zone. It helps women across the country set goals, spread positivity, and realize their own strength. The group’s efforts focus on girls and women of color, but everyone is welcome.

Outlay said it’s frustrating to hear the misnomer that Black women simply don’t exercise. When it comes to cycling, there are a few factors that can keep women of color from spinning around on two wheels.

“There are some barriers,” said Outlay, who is also a University of Wisconsin-Whitewater professor. “One is having a bike. They can be expensive. Then, there are women who simply do not know how to ride a bike. And, helmets are a barrier for some, especially those who have updos, braids or a poof.”

Helmets are not required by law, but many bike groups require them as a safety feature, Outlay said.

Nationally, BGDB has over 80 chapters and thousands of members across the U.S. and the Caribbean island of Antigua. They host annual meetups, organize virtual group rides, share inspiring stories, connect women across the country who share a passion for cycling, and, most importantly, get more women of color on bikes.

Lead by “Sheroes”, the organization helps build confidence in a physically and environmentally healthy form of transportation … one pedal push at a time. Suzanne Dorsey-Sterling is one of BGDB’s newest members. She admits that she purchased a bike well over a year ago, but let it collect dust before pushing herself to really get in shape. She attributes that get-up-and-go attitude after a friend challenged Dorsey-Sterling to ride 100 miles in a month.

“My friend told me to just try 25 miles a week and I was like, I don’t know if I can even finish five miles,” said the 54-year-old Dorsey-Sterling. “Somehow, someway, with the encouragement of my husband, I completed 140 miles last month. With that momentum going, I’m just going to keep riding.”

She admits there are physical and psychological perks of group cycling with peers. You don’t feel alone.

“I’m slightly overweight, but I don’t have any health issues and I don’t want them to start,” Dorsey-Sterling said. “So, I wanted this new lifestyle change so I can be healthier. It’s still hard, I can’t even lie, but it gets better every time and I really enjoy it.”

Members of Black Girls Do Bike assist new riders in building stamina and bicycle etiquette. Although exercise is an obvious benefit, bike riding is a great way for members to become aware of issues in their neighborhood and other nearby communities.

Madison’s Dawn Crim, state Secretary of Safety and Professional Service, is an avid cyclist. Some 10 years ago, she hit the pavement before daybreak with a group from the Boys & Girls Club called the Night Riders. When she learned about a local chapter of the Black Girls Do Bike forming, she was all in.

“We really need more Black women to join us,” Crim said. “We take our time and teach bicycle set up, bicycle safety and attend bicycle events around the city. …The nice thing about this group is that you don’t have to worry about keeping up. You build up. We have a no drop rule so that nobody is left behind.”

Crim bears witness to the changing culture of cycling. She cycles with everyone from community leaders to family members.

“It’s exhilarating and nice just to be outside,” said Crim, who hits the trails from April to November. “So, come on and meet me.”

On this day, as the two chapters meet up for the third time, the all-women cyclists had their choice between completing a 14-mile or 32-mile trek from Machinery Row and through the Capital City trail around Fitchburg, UW-Madison’s campus and the Arboretum trail. The women made stops at the farmers’ market on the Capitol Square and Africa Fest at McPike Park.

To onlookers, the adventure was inspiring and invigorating.