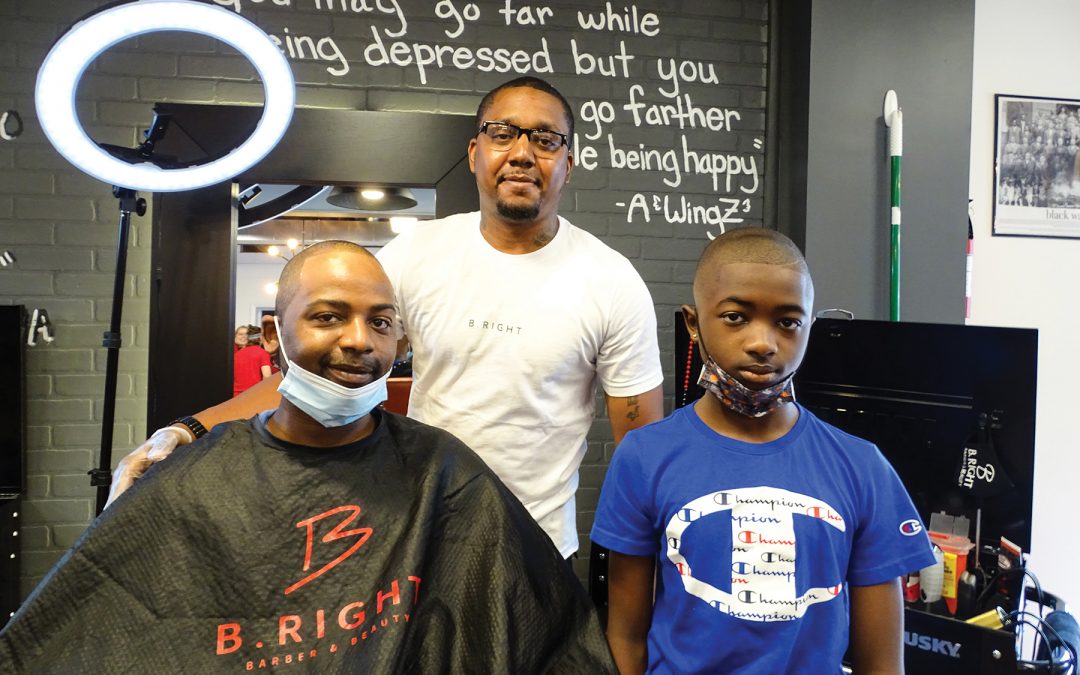 Aaron Perry walked into B. Right Barber & Beauty shop in Sun Prairie with a TV crew from Good Morning America in tow. It didn’t distract the youngsters busily building color pieces on a LEGO® table. But, a handful of men getting fades and beards lined up in barber chairs raised an eyebrow or two.

Perry is a local community workhorse gaining national attention for his die-hard mission to reduce health disparities that adversely affect Black men and boys in Dane County. On this day, he christened the opening of the Rebalanced-Life Wellness Association Father & Son Family Health Education Center, strategically located inside a backroom of the Bristol Street barbershop.

This is the second time Perry and his nonprofit, Rebalanced-Life Wellness Association, has partnered with a Black-owned barber. The first Men’s Health & Education Center opened inside JP Hair Design on Madison’s West Side in 2016. The fitness guru is dedicated to combating health disparities, such as obesity, diabetes and heart disease, by catching Black men where they spend most of their time away from home and work: The barbershop.

Perry was recognized alongside physicians, scientists and political leaders in Time Magazine’s 2018 “50 Most Influential People in Health Care”.  An author, keynote speaker, radio host, Perry also holds the distinction of being the world’s first African American diabetic to complete the Ironman Triathlon.

The excitement in Perry’s bright gaze was contagious. Supporters and nursing students from Edgewood College beamed as B. Right customers began lining up to have their blood pressure tested, many with their children clutching their hands and legs.

“I attribute this day to my late mother,” said Perry, eyes welled up with tears. “Every day before I walked out of the house to go to school, she would always kiss me on my forehead and say, ‘Remember baby, you are important.’ Her name was Mattie.

“Today, the first nursing student who introduced herself, her name is Mattie. I kid you not, the third student who came up to me and introduced herself was also named Mattie. This was meant to be. This told me my momma was here with me today,” added Perry, whose mother was killed two weeks before his high school graduation when he was 17.

Barbershops and salons are the cornerstones of the Black community. They serve as intergenerational safe havens ꟷ even sacred spaces ꟷ for African American men and women of all ages and income levels to socialize. Barbershops are often referred to as the “Black man’s country club” for being the space where African Americans can talk openly about issues from sports to politics to relationships to raising their children.

Barber on Frontline of Health Initiatives

Jason Boatright, owner of B. Right, grew up in Joliet, Illinois, before moving to Sun Prairie in 2010 for better life opportunities. Stepping out on faith, he opened his first barbershop on Main Street in 2018. The business grew causing Boatwright to relocate to his current location last fall. The décor is spacious and exudes Black pride. The walls are filled with inspirational quotes from Barack Obama, Tupac Shakur and Malcolm X. His favorite is the one right over his shoulder, written by his daughter that reads” You may go far while being depressed but you go farther while being happy.”

A portrait of the late rapper Nipsey Hussle, painted by a Sun Prairie High School graduate, stands out among the barber chairs, coin-operated arcade game, foosball table and vending machine. A retro barbershop pole with blue and red moving stripes are just outside the window of the waiting area where children of color can find books filled with protagonists that look just like them.

The partnership with Perry is a welcomed, and necessary, addition to the shop. Boatright said it’s a way to give back to the community and provide easy access to lifesaving or disease-altering treatments.

“Black men in general most definitely do not like going to the doctor,” said Boatwright, who cuts up to 100 customers’ hair weekly. “Now, we will be able to help Black men with their inside and outside. As I cut their hair, if they need help discussing their health, we can send them right in there.”

Systemic racism occurs in practically all aspects of life but is perhaps nowhere more insidious than in health care. The health of Black men consistently ranks lowest across nearly all groups in the United States. For instance, high blood pressure rates for African Americans in the U.S.  are among the highest in the world.

Perry’s neighborhood mini clinic aims to turn the numbers around so good looks and good health go hand in hand.