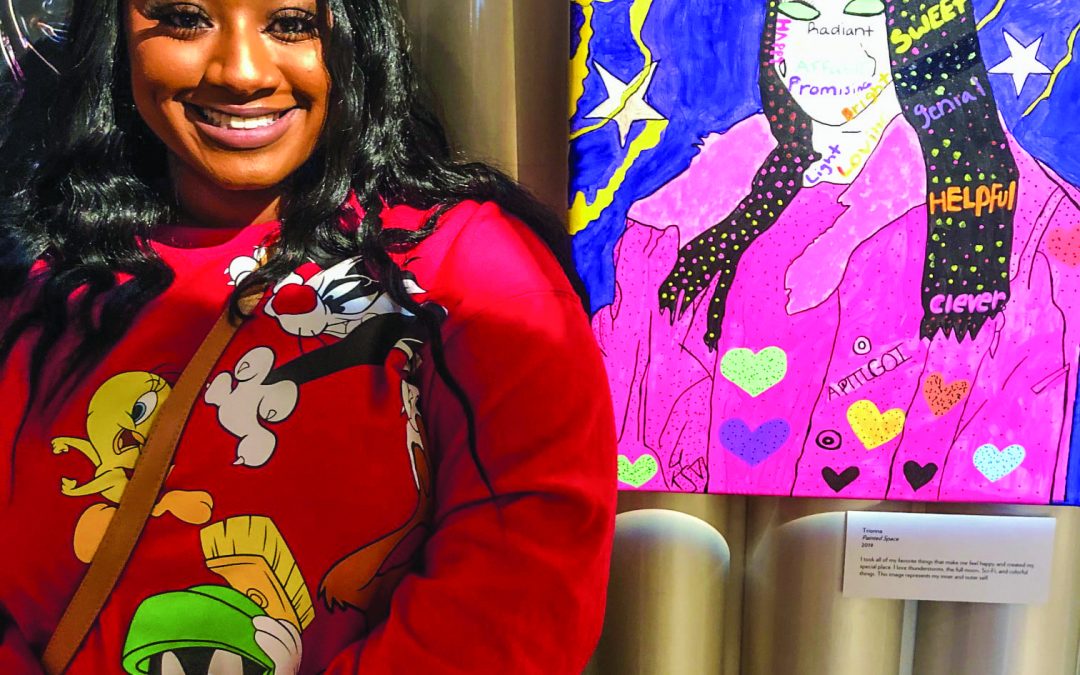 Dakwon Sanders admits the thought of seeing, breathing and feeling ocean waves has only been a dream. When an art teacher encouraged him to paint his “happy place” on canvas, he did so, sparking a desire within him to see his dream become a reality.

His backbone of confidence straightened when the self portrait he painted was on full display in the corridor of the Overture Center for the Arts in an exhibit called Urban Bubble. There it was, a silhouette of Dakwon sitting on a beach with a few of his dreads peering from beneath his hoodie. This 19-year-old high senior who is diligently working to turn his life around and obtain is his diploma, acquired fame and the admiration of art lovers.

With the guidance of a resident artist, Faisal Abdu’Alla, he discovered art is healing and life enhancing.

His message on the painting: “Life could crash at any second. So, whatever you desire, just go for it.”

Living in and on the Urban Bubble, causes one to ponder how being young, gifted and Black does not equate with being understood and encouraged by the society and the system that runs it. Moving through the turmoil, the artist said they seek to define who they are on their own, by projecting their realities into the future and by “owning our narratives and images.”

The Bubbler, in collaboration with Abdu’Allah and Madison Metropolitan School District’s Foundations Central graduation recovery program (located at the Urban League of Greater Madison), presents an art exhibition by Madison youth. Over a nine-week experience held in the Bubbler Room at the Madison Central Library, Urban Bubble is the culmination of conversations and productions that celebrated identity, excellence and the powers within each individual.

The exhibit was showcased on the first-floor rotunda gallery of the Overture, in the same location the “Keep Hope Alive” photographs were displayed. The images were the work of Pete Souza who is the former chief official White House photographer for President Barack Obama.

During the Jan. 13 reception to introduce the artists, Abdu’Allah says he witnessed the transformation in many of the students, especially in the way they now view the beauty within.

“Through the projects, I want the kids to be better equipped in understanding images,” Abdu’Allah said. “When they see an incident broadcasted on CNN or FOX, they can immediately calculate what’s really going on. The images that are portrayed are often distorted. I want them to see clearly. Give them fresh, clean eyes. So that they are able to see things as they are.”

Upon the wall of the rotunda, the paintings were positioned side-by-side. Words of strength and endurance seemed to be the mantra.

Lamar Williams’ painting depicted some things he likes to do daily ꟷ jumping around and dancing in Timberland boots with is arms raised up. The words, “Never give up, never back down, funny, outgoing, live,” were painted on his piece. To the right of Lamar’s painting, Trionna Hampton drew herself in her favorite bright colors. The words, “Radiant, helpful, promising, sweet,” are woven in hair and across her face.

There’s also a piece that depicts a girl in a crouching position. The words, “Royalty, hard work, driven, independent,” encircle her. It was created by Savannah O’Neill who said, “If I want money, nice things, if I want to get somewhere in life, it must be accomplished through hard work.”

“Savannah has been through a lot,” said O’Neal, her eyes wailing up. “I’m so very proud of her. I’m very moved. This is a miracle for her. I have seen a change in her since she started this program.”

The reception was filled with parents, community leaders and Overture Center staff. There were no shortages of selfies and snapshots. Smiles and laughter filled the room. This was admittedly a huge accomplishment. At appeared from the reaction of the exhibit that the message these young adults’ projected was heard loud and clear.

“The Overture really likes to highlight these kinds of successful youth programs that really work to make visible young people’s lives, especially in their own words,” said Beth Racette, Galleries & Community Engagement Coordinator. “It’s so important for people to get and see how young people represent themselves.”