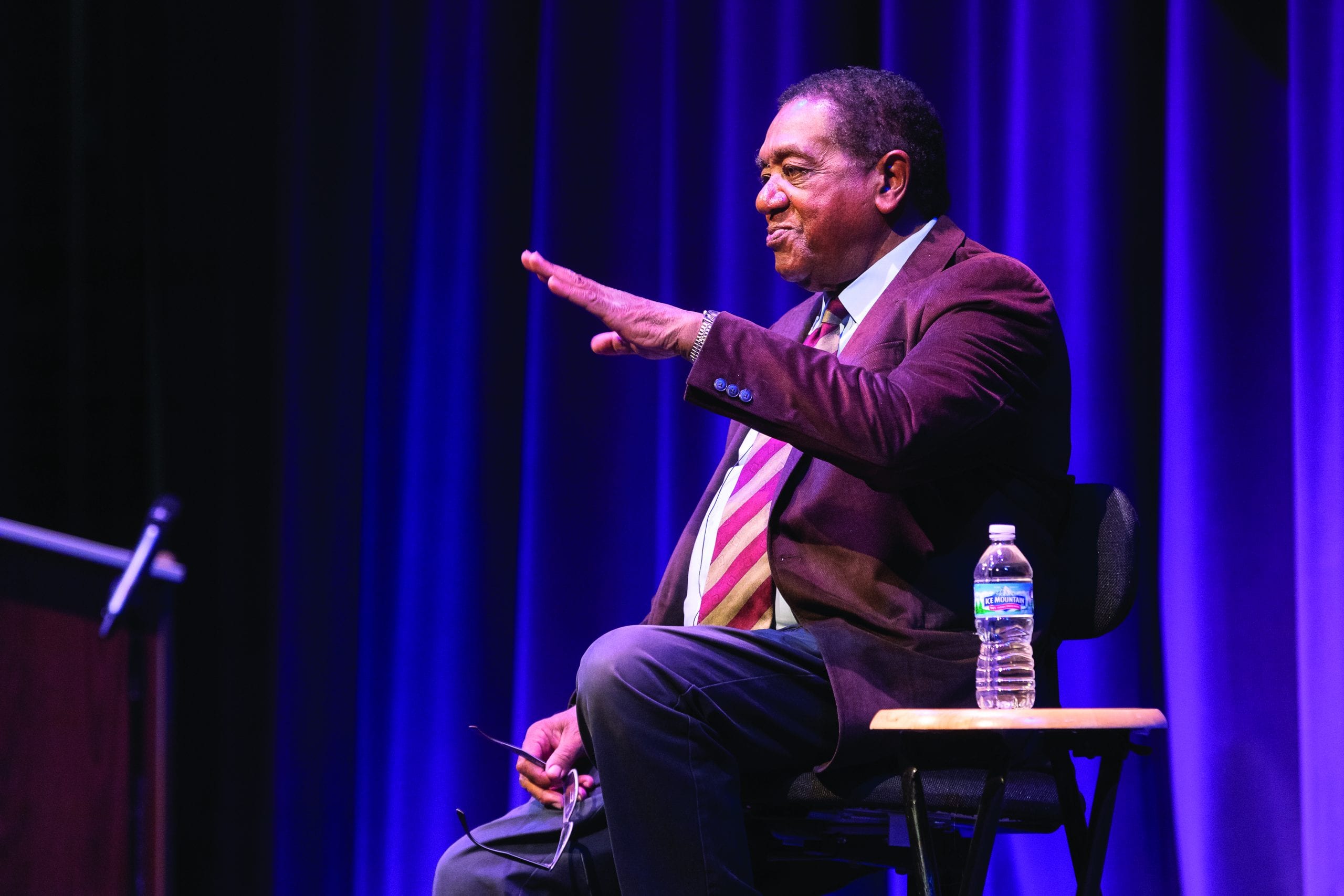 ‘Lock your guns up and go vote’

There’s a reason we recognize the authentic voice of our ancestors. It’s an amalgam of big momma telling us how it was, daddy schooling us on how it really is, and justice hungry activists clamoring on how it must be(come).

The pull and power of truth demands attention. When it comes to speaking the truth, Robert (Bobby) George Seale is the real deal. His weaponized method of executing the facts strikes at the core of the conscience. And when the original founding chairman and national organizer of the Black Panther Party speaks, you just listen.

Seale, who is a grandfather now, had an entourage of followers, waiting to grasp nuggets of knowledge dropped during his visit to Madison Area Technical College in February for the school’s Black History Month program. It was standing room only at the Mitby Theater when the 83-year-old equal rights crusader, emerged on stage to the thunderous applause.

Wearing thick-sole shoes, a brown tweed blazer and necktie, Seale made his way to a lone stool and gave insight about how he the son of a carpenter would eventually spur mass protests against segregation and discrimination, along with the proliferation of the California movement across the nation.

“The guns were just a tactic,” said Seale in explaining why the Party’s fiercely advocated African Americans the right to bear loaded weapons. “It was our way of capturing American’s imagination.”

Mainstream media from the 1960s rarely got the story of the Black Panther Party Movement correct, he said. Misinformed readers may even crinkle their nose in disgust just reading the revolutionary political organization’s name.  Yet, there’s more to the story than one may imagine.

Growing Up and Finding His First Love

A two-hour interview with UMOJA Magazine a week before his visit to Madison felt more like a comfortable chat down memory lane with a family patriarch. It was an oral history of Seale’s involvement in one of the most significant grassroots political organizations the United States has ever seen.

He spoke nostalgically of the Seale legacy. Born in Liberty, Texas, he can trace the family’s last name back to his great-grandmother, Winnie Ferrell, who was 16 when the Emancipation Proclamation went into effect. She worked on a farm for a white family name Seale. There she met and married another freed slave name Peter. The couple accepted the employer’s name Seale as their own.

Bobby Seale’s father, a master carpenter and builder, taught him practical life skills such as carpentry, fishing, hunting and self-defense. His mother was his philosophical mentor. As a kid, he recalled how fire and brimstone preaching at his neighborhood church traumatized him. Instead, he played hooky from Sunday services to attend 14-cent movies blocks away.

He built model airplanes for fun and would go round-after-round explaining to his aunt Zelma ꟷ his mother’s identical twin sister ꟷ how the world was round, not flat like she fervently believed. A voracious reader, science captured his heart and became his first love.

Hunting and fishing were a way of life. Seale was proficient with guns by middle school.

“We used to hunt for ducks, pheasants, rabbits, mule deer and even bears,” Seale recalled. “That’s just what we did back then. We used high-powered rifles. I received my first one when I was 12. It was a .30-30 Winchester rifle that came complete with its own carrying case.”

The family’s building and carpentry skills became lucrative, in part, due to the Shell Oil mining boom. Workers needed homes and the Seale family helped build 500 houses to accommodate the growth during the Great Depression era.

The simple way of life, however, also included the unimaginable. Back where his parents grew up, in the small east Texas town of Jasper, the Ku Klux Klan killed a 19-year-old cousin. It was in that same town years later, in 1998, that Seale’s sixth cousin, James Byrd, was chained by the ankles to the back of a pickup truck and dragged him for 3 ½ miles down. He died when he was decapitated after he hit a culvert. The heinous slaying is known as one of the most vicious hate crimes in U.S. history.

After moving to several cities across Texas, the Seale family boarded train and migrated to Oakland, California, during the Second World War. His father struggled to get carpentry work or join a union, because unions often excluded African Americans during the Jim Crow era. His father, George Seale, did manage to enter a union, and was one of just of three Black men in the state with union membership, according to Seale.

Schools didn’t teach Seale anything about African American history. His only references were about inventor George Washington Carver and Tarzan he saw running African jungles in the movies. Seale said he identified more with the American Indians.

“My mother is part Indian, you see,” Seale said. “A friend of mine and I traveled to South Dakota because we wanted to see the Black Hills where Custer had got his head whipped by Sitting Bull and the Blackfoot Sioux.”

Seale attended Berkeley High School but dropped out to sign up for the U.S. Air Force in 1955. After a conflict with a commanding officer, Seale was dishonorably discharged four years later. The setback did not deter him. He earned his high school diploma and made a living as a sheet metal mechanic for aerospace companies. Seale also got paid working as a comedian.

“I worked in every major aircraft plant and aircraft corporation, even those with government contracts,” he recalled. “I was a top-flight sheet-metal mechanic.”

Seale attended Merritt Community College where he studied engineering. While at college, he joined the Afro-American Association (AAA), a group on the campus devoted to advocating Black separatism. Through the AAA group, Seale met Huey P. Newton. Seale traced his own political awakening from 1962, went he walked up to an African American Association demonstration on the street. He said speakers opened his mind to Black leaders from the past, such as Marcus Garvey and Jomo Kenyatta who is considered the founding father of Kenya.

While studying engineering design, he managed to balance a night job with his studies. He was working at Kaiser Aerospace and Electronics in the Gemini missile program when he first heard Dr. Martin Luther King Jr. speak. The civil rights giant encouraged the 7,000 folks in the Oakland Municipal Auditorium to begin boycotting bread companies for their racist hiring practices. “We’re going to make Wonder Bread wonder where the money went,” Seale quoted King.

Delving into African history, King, Nelson Mandela and Malcolm X captured Seale’s attention. He quit his cushy NASA engineering job to do begin grassroots political electoral community organizing.  So, he set up a youth program in North Richmond, California. The program paid Black youth to tutor younger Black students in the summer. His passion for community organizing only grew from there.

Afterward, he worked for the city government of Oakland as a community liaison for the North Oakland Neighborhood Service Center finding jobs for the unemployed. But Seale believed there could be more progress in Black economic and political advancement if more African Americans were elected to political office.

“In 1965, there were only 55 Black politicians across the country,” Seale said. “Something had to be done.”

Power to the People

In October 1966, Seale and Newton, who was a law student at the time, founded the Black Panther Party for Self Defense. Seale believes Black people won’t have any control until they run for office. He added: “How can we get fair shares of equality and equity out of those tax monies as its related to our existence here in our communities without that?”

Another reason Seale and Newton started the organization was because they were unable to get help from the Oakland City Council in establishing a police review board to examine charges of police brutality in the city.

“I was employed by the city government when we created the Black Panther Party,” Seale said. “People don’t know this. They have this notion in their heads that we were some young, tough, hoodlums that organized in some dark room. That’s crap.

“When you came into my organization, you had a lot of reading to do. We had just 16 members then. I told them just before we held our first rally to take a bath, shine your shoes and crease your pants … I didn’t want anyone in the Party to look like Black hippies,” Seale recalled.

Members wore berets and black leather jackets. They carried rifles, lawfully. To the communities they served, the Black Panthers were seen as vigilantes. But to law enforcement, they were a threat. The political organization, with a slogan of “Power to the People,” garnered public focused more on the members’ uniforms and gun-toting police patrols than its Ten-Point Platform and Program, which called for, among other things, jobs, decent housing, quality education and an end to police brutality.

FBI director J. Edgar Hoover, who deemed the Black Panther Party a threat to American security, launched a not-so-subtle counterintelligence attack against the group, which included infiltrators and deadly raids.

The Black Panthers never directly called for violent revolution, but he warned that African Americans would use “any means necessary” – especially armed self defense – once they realized just how pervasive and hopelessly entrenched white racism had become.

“By the end of 1968, I had 5,000 members in 49 chapters and branches throughout the United States of America,” Seale said. “I went and visited every chapter so I could teach these brothers and sisters the fine particulars in the methodology of grassroots community organizing centered around the programs in the community.”

Seale discussed his interactions with Hollywood royalty such as Marlon Brando ꟷ a supporter of the movement ꟷ and highlighted the leadership of women within the Black Panther Party.

As part of an attempt by the Black Panther Party to enter electoral politics, Seale ran for mayor of Oakland in 1973, finishing second and forcing a run-off election which he lost. In 1974 Seale resigned as chairman of the BPP, noting that he was physically and emotionally exhausted.  He remains active, advocating for groups that support social justice and educational opportunity.

A year ago, Seale, who remains a California resident, began an ecological infrastructure housing program called Environmental Renovation Youth Jobs Projects. Nowadays, when Seale isn’t spending time with his grandchildren or writing more barbecuing cookbooks, he reflects upon his momentous social justice work and advocacy on behalf of African American people. He said the efforts of the Black Panthers can be seen today.

“I’m still a revolutionary,” he said. “But that don’t mean I’m going down the street carrying guns. Take your guns, secure them away from the children, leave your guns at home … We don’t need guns like we did when there were few Black politicians.

What’s next, producing a possible independent film on his life.