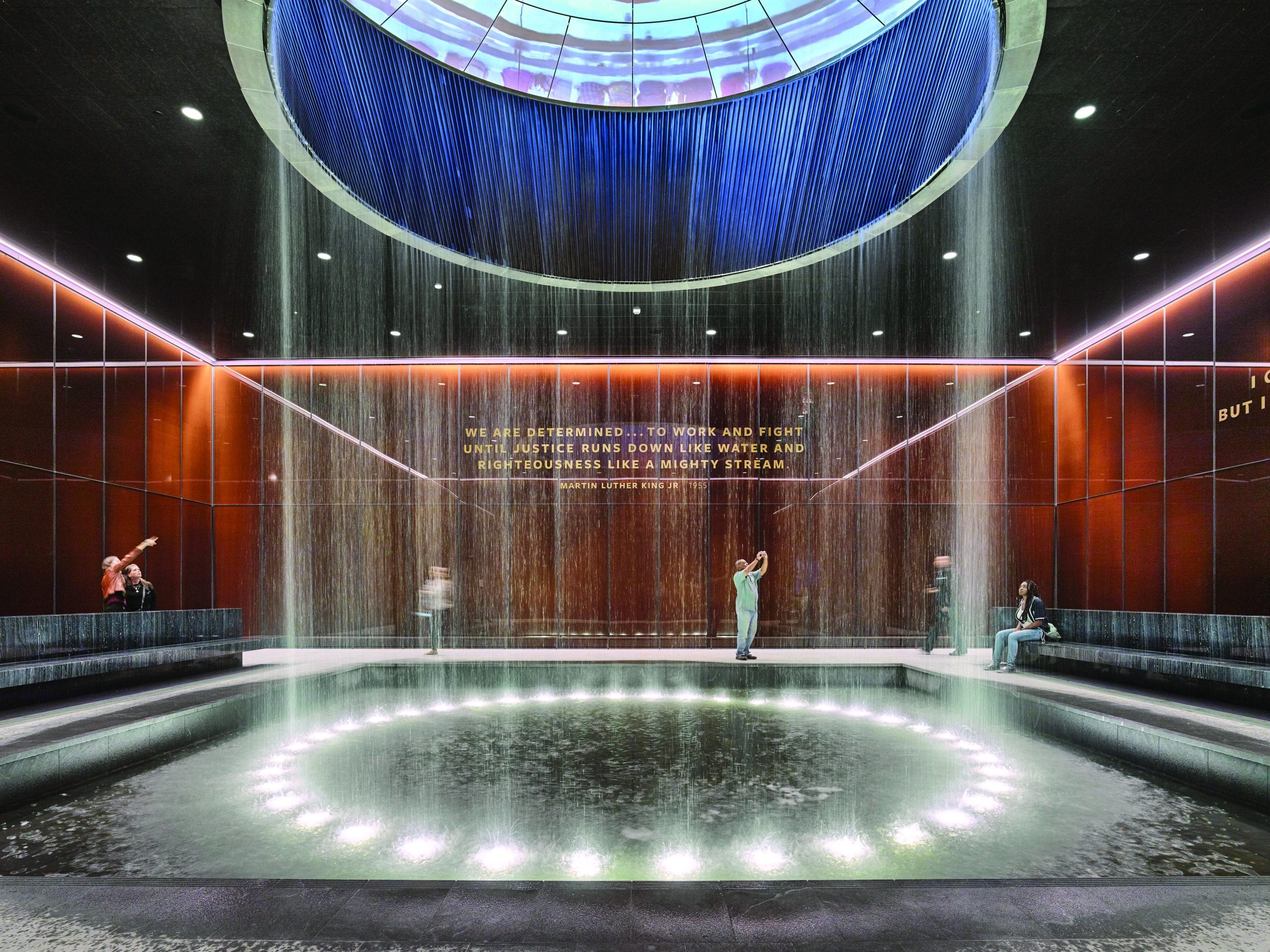 Given that the museum has been open for three years, it’s certain that many Madisonians have already made the pilgrimage to Washington, D.C., to take in this latest addition to the growing trove of Smithsonian historical repositories.  It is therefore understandable that many UMOJA readers will have their own personal take on their NMAAHC Museum experience. But for those who have yet to see the house that the “focused collective” built, it really is something to behold, cherish and appreciate.

The exterior itself is a work of architectural Afrocentrism and artistry.  Selected from a copious competitive bidding process, three Black architects, Phillip Freelon, David Adjaye and J. Max Bond Jr. in consultation with the SmithGroup, won out as the designers and builders.  The team incorporated “elements from the African Diaspora’s architectural traditions as well as themes of uplift and celebration”, according to the museum’s official account.  To wit, the creators appropriated inspiration from the crown or corona design that’s frequently used in Nigerian architecture. The crown concept was derived from a Yoruba (West African) carved wood statue of a man adorned with a towering “inverted Pyramid” on his head by Olowe of Ise.

The museum building is asymmetrically juxtaposed across the national mall from the Egyptian like obelisk that is the Washington Monument.  The NMAAHC’s outer façade resembles the base of an inverted pyramid wrapped in what looks like large strands of bronze lace that are actually openwork cast aluminum panels harkening memories of the intricate ironwork designs fabricated by enslaved African Americans in Louisiana and other parts of the American South.

The interior of the museum was organized to flow according to the chronology of African Americans’ experience with America.  After a cursory orientation at the visitors’ desk on the street level, the recommended tour route begins with a slow and ominous descension by elevator into the depths of the museum, three floors below.  Practically speaking, constructing half the museum underground preserved the ubiquitous visibility of the Washington Monument despite the two buildings’ close proximity (the designers avoided the Nolen Shores effect, which compromised the visibility of the Wisconsin State Capitol from John Nolen Drive in Madison).

The designers adroitly worked with the subterrestrial feature to accentuate the sinking mood that permeates the thirty comrades who are packed into the glass sided elevator as century marks delineate the travel back in time, as we go down…1900s, 1800s, 1700s, until we are released into the dark opaque confines where our journey begins in the 16th century which marks the genesis of Africa’s expansive diaspora.

From the very beginning, it was all about the money. Trading and shipping conglomerates from Portugal, The Netherlands, Spain, and Britain set about bridging the old world with the new largely motivated by commercial opportunity.  Human trafficking was lucrative and therefore rampant.  The raw material of wealth in the New World were agrarian products – sugarcane, rice and eventually cotton and tobacco.  These crops literally required yeoman labor, stoking demand for strong, girthy Africans.  And conveniently, their skin color facilitated a visible line of distinction that would de facto and unequivocally disenfranchise an entire race of involuntary immigrants.

The beginning point of the tour, 50-feet underground, is a mental and emotional vexation. There are many stories of capture, bondage, and transport to the New World.  While the basics of our slave history is common knowledge, the museum plies us with unfathomable details.  Of every hundred Blacks that were captured and bound for slavery, 64 died before they began the crossing and 50% of those aboard the ships died in transport, lending a dissonant veracity to Nitzsche’s truism, “that which doesn’t kill us, makes us stronger.”

There are simply too many images, artifacts and anecdotes to do justice to all that has been curated on each of the seven floors of the National Museum of African American History and Culture.  Assuming one is not overwhelmed by the tsunami of information, each visitor is sure to have their own transcendent moments as they wend their way through, and up. I rue the interminable, tortious days that our ancestors were required to work, having the fruits of their labor expropriated to their masters and their masters’ descendants. It was a life unimaginable, and un-American.  Yet it’s a heinous history that’s indelibly etched into America’s essence, tantamount to a hideous inchoate national birthmark.

If the museum’s structure is an inverted pyramid, then the top is the bottom, and a true-to-life prequel to all that follows.  The museum documents a litany of epic historical intervals after the angst-inducing beginning.  African Americans’ march toward freedom and suffrage was as protracted as it was resisted. Emancipation was truncated at every turn. Reconstruction was aborted in its early trimester. Black codes and green books promulgated contorted norms and morays. And racism reigned in every variety – de facto, de jure and disguised.

Ascending up the museum floors, the sense of relief is palpable as one is greeted with a cacophony of Black power music, blaring liberation speeches and a visual feast of artifacts and pictures depicting the raucous, defiant civil rights era.  The freedom fighters commemorated in this section had no certainty as to the outcome of their civil disobedience, but their voices and demeanor were certain and convicted.  Such was the resolution of the college students from NCA&T State University who took on an unjust societal status quo as though their lives depended on it.  They did indeed lay their lives on the line – for the sake of a more fair and equitable future.  The sit-ins to dismantle segregation started in my hometown of Greensboro, North Carolina, during my lifetime.  It is one of several key moments of history that tethers me inextricably to the NMAAHC.

The “C “in the acronym of the museum is for culture.  Liberated and empowered African Americans poured music, art and p’jazz (pizazz and jazz) into the soul of America.  Black culture wafted over the country like a succession of volcanic convulsions spitting its staccato style and verve into art, sports and entertainment (spurring a morphed version of exploitation and IP hustle which the museum fails to address).

Going up to the “bottom” of the pyramid (actually the top of the building) the feel is one of cathartic celebration, suggestive of a triumph in progress. Fleeing the noxious oppressors in the south and attracted to fee for service labor of the north, African Americans began to work their urbane cultural magic.  The museum’s myriad of renderings will resonate differently for every museum goer as it stokes hyper personal memories and feelings.  Having lived through the more recent decades, I had poignant memories of the:

These decades were however marred with a proliferation of drugs and violence that lead to an epidemic of incarceration.  And there were also hanging chads and, of course, Katrina.

To be sure, African Americans’ abundant contributions to music, sports, entertainment and the military are appropriately noted and celebrated.  The recurring theme of the nearly inexhaustible list of notables was their consistent role in promoting, advocating and modeling societal change.  There’s simply too much evidence of the impact of these icons on society to ever think that a Black athlete or entertainer should (figuratively) shut up and dribble.

The NMAAHC is itself iconic.  It is the exquisite result of an auspicious convergence of vision, leadership, intellect, creativity and, importantly, philanthropy.  When you do go, take a moment to peruse the wall of fame donors, and experience the swell of pride as you learn that the Oprah Winfrey Charitable Foundation and Robert F. Smith are listed as anchor donors along with the Eli Lily Foundation.  Also, among the scores of donors listed, are LeBron James who paid tribute to Mohammed Ali by underwriting an outsized space to memorialize his outsized contribution to sports, culture and society.  Other prominent donors include Kobe Bryant, Alpha Kappa Alpha Sorority, Sigma Pi Phi Fraternity and Omega Psi Phi.  And the NMAAHC is the first Smithsonian structure that to receive the Eco-Oscar; Gold LEED certification.  It is also interesting to note that Lonnie G. Bunch III, an African American, was named this year as the 14th Smithsonian secretary, overseeing the entirety of the vast Smithsonian Collection.

Despite the comprehensiveness of the NMAAHC, there was precious little in the museum that captured the remarkable history of African Americans in Wisconsin.  It therefore serves as a reminder and inspiration for us to curate our past locally. We do have monuments in Wisconsin, and there are more to be developed.  It is important that we collectively preserve and celebrate our history and culture in Wisconsin.  Nonetheless, the NMAAHC is the mothership, connecting our lives, our works and our creations to our resilient past, setting the stage for a transcendent and triumphant future.  It’s up to all of us to write the ensuing chapters of what, so far, has been an extraordinary saga of human evolution.