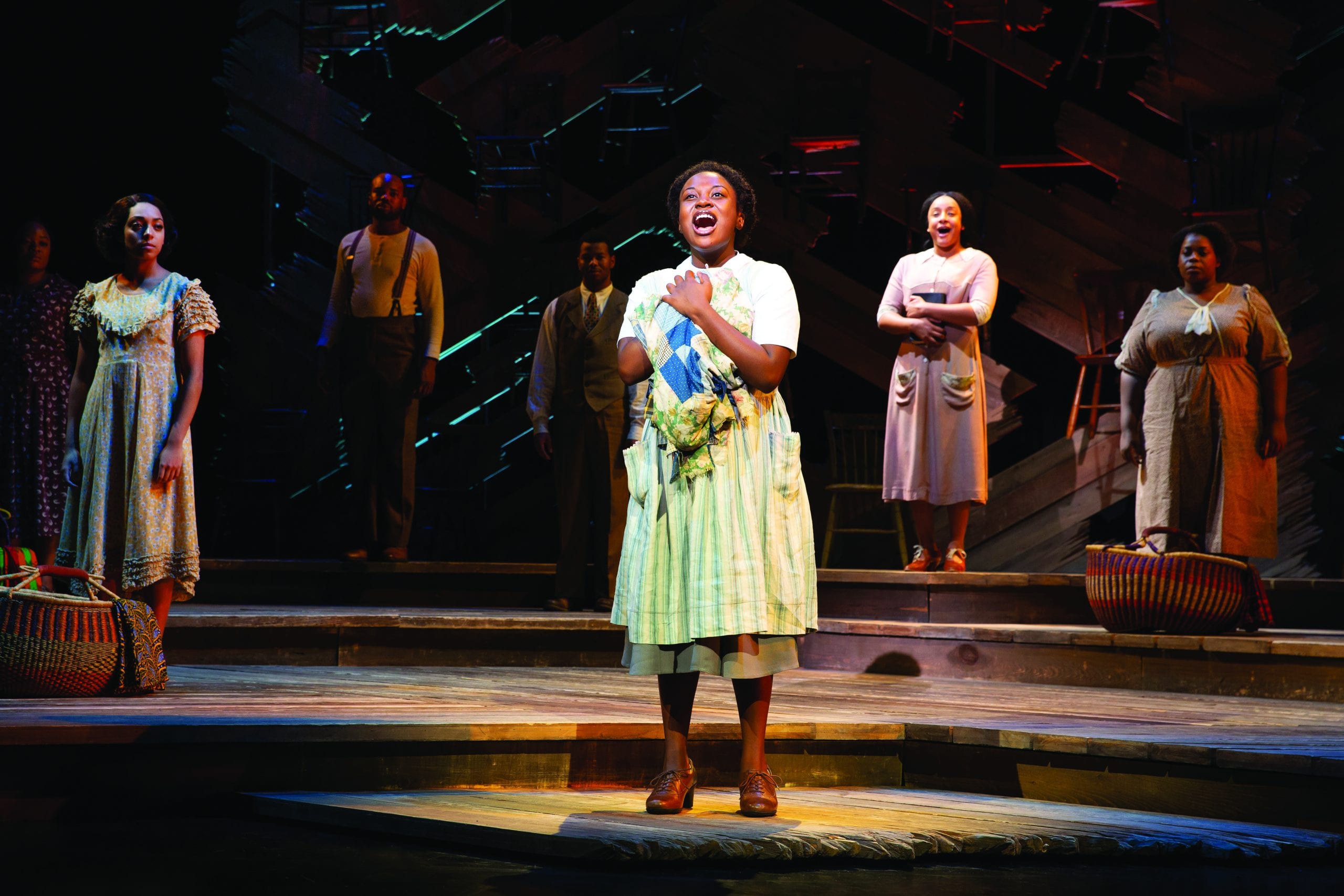 The Color Purple is a 1982 epistolary novel by Alice Walker which won the 1983 Pulitzer Prize for Fiction and the National Book Award for Fiction. This epic story about a young woman’s journey of love and triumph was later adapted into a film and musical of the same name.

Taking place mostly in rural Georgia, the story focuses on the life of African American women during the 1930s, addressing numerous issues including their exceedingly low position in American social culture. The Color Purple focuses on a young woman named Celie, who suffers extreme physical, mental and sexual abuse from the men in her life, but through the examples and support of other women, manages to assert her independence and take control of her life.

The Tony Award-winning revival of “The Color Purple,” emerging from a 1985 Steven Spielberg film starring Golden Globe-winner Whoopi Goldberg, and a 2005 Broadway musical, is coming to the Overture Center for the Arts, Feb. 18 to Feb. 23.

Mariah Lyttle, who is making her national tour debut in the lead role of Celie, took a moment to share her theatrical background and how she prepared for this breakout performance.

UMOJA: How did The Color Purple the Musical find you? In other words, how did you land the lead role as Celie?

Mariah: While I was in Richmond, Virginia, doing “The Wiz” at Virginia Repertory Theatre, my agent sent me the audition notice for this production. Since I was out of town, I quickly recorded the material given to me on the lower level of the house I was staying in. A few weeks later, I went to NYC for the callbacks, and received the good news the next day!

UMOJA: How have you prepared for the role? Did you read Alice Walker’s Pulitzer Prize winning novel? Did you talk to women who have experienced abuse? Did you reach out to Whoopi Goldberg, who played Celie in the 1985 coming-of-age period drama film directed by Steven Spielberg?

Mariah: I listened to the soundtrack of the most recent revival of the show, read the book, and did some research on African American women in the early 1900s. Unfortunately, we are still in a time in our society where stories revolving around the #MeToo movement are still in circulation, so it wasn’t hard to read up on other women’s experiences of abuse. Whoopi Goldberg is not in affiliation with this production, so I have not reached out to her.

UMOJA: What does playing Celie mean to you and what are you hoping the character will teach the audience?

Mariah: It has been a privilege to tell a story such as Celie’s. I have garnered a sense of strength and stability in my life while performing this role, something that I certainly think is obtainable for anyone who sees this production. The core idea of faith is so important to grasp from watching Celie’s journey. My hope is that if nothing else affects those who see this show, they will leave the theatre with a new sense of faith – believing in something even though it may seem like it won’t come to pass. I believe it’s a universal takeaway – anyone from any race and any religion can learn this.

UMOJA: How much do you relate to Celie?

Mariah: I, surprisingly, relate to Celie on a lot of different levels, both the good and the bad. Rather than reflecting on the bad, as it is quite personal to me, I’d rather talk about the good. It wasn’t until I began to delve into the production that I realized that I’m on the same path of self-discovery that Celie is on. I’m learning how to stand up for myself and use my voice. I’m beginning to realize the power that I have always had, but that might have been silenced by others. I’m learning how to be happy with my true self.

UMOJA: Do you have a favorite scene and/or song that you enjoy the most? Why?

Mariah: My favorite song, by far, is Miss Celie’s Pants. For a while, we’re set in Celie’s gloomy past. We witness her trials in tribulations, and they’re fully realized by the beautiful – yet dark – themes set in the costumes and set designs, and the music as well. The first glimpse of brightness we see is when Shug Avery enters her life in Act One. By the time we reach Miss Celie’s Pants, we see just what kind of impact Shug has imparted on her. Not only is this one of the only upbeat songs that Celie gets to sing, but her entire world surrounding her is a bit brighter and more upbeat as well. I won’t give too much away… you’ll have to see the show for yourself to know just what I mean by all this 🙂

UMOJA: Is there a scene that is tough to do? If so, why?

Mariah: It is most certainly the scene when Nettie is taken away from Celie at the hands of Mister. The stakes are high, and there is a ton of ground to cover in terms of stage combat. It is so hard to not become too emotionally wrapped up into this scene, as there is still a story that needs to be told. The thought of my own sister being torn away from me at such a young age, and not knowing when she will return, is ultimately horrifying. However, this is Celie’s reality. This is a perfect example of a time where I have to take myself out of the equation entirely in order to truthfully tell Celie’s story.

UMOJA: When did you first catch the acting bug? Was your decision met with support?

Mariah: My freshman year of high school, I was granted the opportunity to play “Sarah” in the musical “Ragtime.” It was my first notable role, in only my second musical ever, and the acting bug bit me HARD. I fell in love with immersing myself in someone else’s story, singing the songs and reading the words that could possibly change someone’s life. It’s the most rewarding thing I’ve been able to do.

UMOJA: I think I read that this is your debut tour. Congratulations! Has it really sunk in? How has it changed your life professionally and personally?

Mariah: It still hasn’t sunk in!! Every day I wake up and I still can’t believe that this is my life. However, I am still so, so grateful for this opportunity. There are a lot of things that I have forced myself to do in order to stay mentally, spiritually, and physically healthy while on the road. It’s a tough change, having just graduated from college and almost immediately jumping into a professional career. I am still learning, every day. I’m lucky to have such a supportive and loving family onstage and off, who are always there for me.

UMOJA: When looking over your social media accounts I noticed the biblical scripture Esther 4:14. Why is this important to you?

Mariah: The scripture states “Perhaps this is the moment for which you were created.” I feel like at my age, 22, it’s so easy to wonder what my purpose is in this life. And every day, I am reminded that I am here to touch people’s lives through music. There are many facets in which I have been able to do that, but the commonality in it all is that it is always surrounding music.

UMOJA: What advice can you give to brown and black skin youngsters who want to pursue a theatrical career?

Mariah: PLEASE DON’T GIVE UP. Unfortunately, we have to work twice as hard to get at least half of what our counterparts have. However, what is for us will be for US. The hard work doesn’t go unnoticed. You have to let go and let GOD (or whatever higher power you believe in) do the work that’s unseen.

UMOJA: Is there something I didn’t ask that you wish I had?

Mariah: No! But a question for you – have you gotten your tickets yet?!