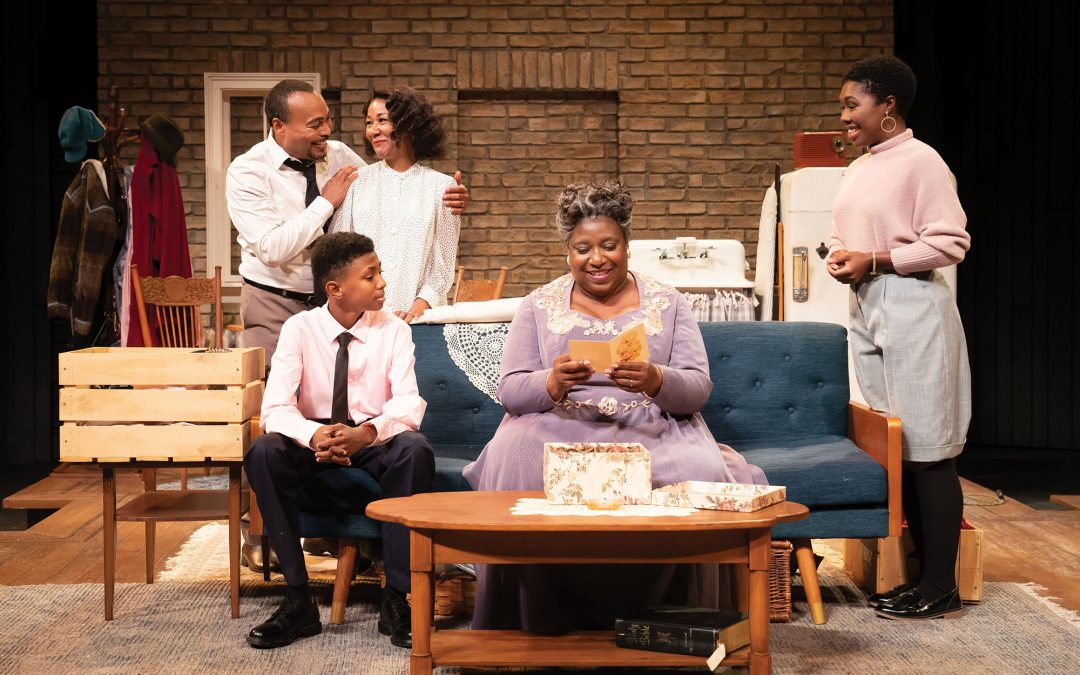 An immensely moving portrayal of a Black family on Chicago’s south side struggling to realize the dream of a better life and demand dignity, “A Raisin in the Sun” features themes that remain relevant today as they were in 1959. The American Players Theatre in Spring Green provided an intimate setting to take a journey with an amazing cast.

A Raisin in the Sun” is the first Broadway play to be written by a Black woman. The gripping drama is relatable as the family tries to make its way in the world that really doesn’t want to welcome them. Still, they forge on.

The APT cast is impeccable. The matriarch Lena Younger (Deanna Reed-Foster), her younger her son Walter Lee Younger (Gavin Lawrence), her daughter, Beneatha Younger (Charence Higgins), Walter’s wife, Ruth (Gina Daniels), and their son Travis (Milwaukee native Reece Davis), live in a cramped Chicago apartment in the 1950s when Chicago was a segregated city. Commanding every moment on stage, Reed-Foster and Lawrence demonstrate why this awarding-winning 20th century American classic is a strong part of the American canon.

Expecting the imminent arrival of a $10,000 life insurance check after the recent death of Lena’s husband Walter Lee Sr., each member of the younger family imagines how the money could afford them a better lot in life.

A community outing collaborated by The Urban League of Greater Madison and NewBridge Madison brought over 100 community members to the memorable performance.

Madison resident Brenda Brown, who grew up in Chicago in the 1960s, first watched Lorraine Hansberry’s immortal “A Raisin in the Sun” on the screen. It was directed by Daniel Petrie and starred Sidney Poitier and Ruby Dee.

“I was overwhelmed by the quality of the actors and actresses in this play,” Brown said. “They did a superior job in telling the story. And it was so pleasant to watch it in an outdoor theatre on a beautiful night. It was a gift.”

Brown connected with the family’s struggles and conditions they were desperate to escape. She said she was especially moved by the disparities Black men endured and yet, had to find pride in earning a living.

“This play exceeded my expectations,” said Brown, who left Chicago to attend UW-Madison, and never left Madison. “It’s one thing to watch a movie made in the sixties with Sidney Poitier … but the outdoor setting at APT made the story seem more real to life.”

A Raisin in the Sun is a play by Lorraine Hansberry that debuted on Broadway in 1959. The title comes from the poem, Harlem, also known as a Dream Deferred by Langston Hughes.

What happens to a dream deferred? Does it dry up like A Raisin in the Sun? Or fester like a sore and then run? Does it stink like rotten meat or crust and sugar over? Like a syrupy sweet? Maybe it just sags like a heavy load, or does it explode?

Hansberry — playwright, author, and political activist — was born in Chicago in 1932 to a family that was influential in that city’s African American community. The granddaughter of a slave and the youngest of four children, her father became a successful real estate broker, and her mother was a schoolteacher. Her parents contributed large sums of money to the NAACP, and the Urban League and played host in their South Side home to some of the most eminent Black artists and intellectuals of their day.

They faced violent mobs when the family moved to a predominately white neighborhood. In fact, Hansberry’s parents patrolled the apartment at night with a loaded gun. At one point, a brick crashed through their window narrowly missing Hansberry as a young girl. Early on, she was indoctrinated into social justice and the civil rights movement.

Her father fought the right to have his family live where they wanted to and won in a case that went before the U.S. Supreme Court, as Hansberry v. Lee, which ruled restrictive covenants illegal.

In 1948, Hansberry started college at the University of Wisconsin-Madison, which had very few Black students. Her mother wanted her to live in a residence hall. Langdon Manor, a housing group for female artists and writers, was suggested. Before Hansberry could move in, she had to come to dinner with the current residents, who would then vote on whether she could live with them. The vote was unanimous in her favor. Hansberry majored in art, taking classes in stage design and sculpture.

After two years, she left college and moved to New York, where she worked for a progressive newspaper called Freedom and wrote plays. The year was 1950. She earned $31.70 a week as a reporter. Freedom was a radical Black newspaper published by the world-famous artists Paul Robeson.

At 29, Hansberry became the youngest American playwright, the fifth woman, and the only African American to date to win the New York Drama Critics Circle Award for Best Play of the Year. The play was lauded for its authentic depiction of Black American life. In 1961, the film version won a special award at the Cannes Film Festival and was nominated for a Screen Writer’s Guild Award for Hansberry’s screenplay.

In 1963, Hansberry became active in the civil rights movement. Along with other influential people, including Harry Belafonte, Lena Horne and James Baldwin, Hansberry met with then-attorney general Robert Kennedy to test his position on civil rights, according to Biography.com.

Hansberry rose to a literary celebrity before dying of pancreatic cancer in 1965, at the age of 34. And she is among the more than 50 people featured in the Wisconsin Alumni Association’s Alumni Park.