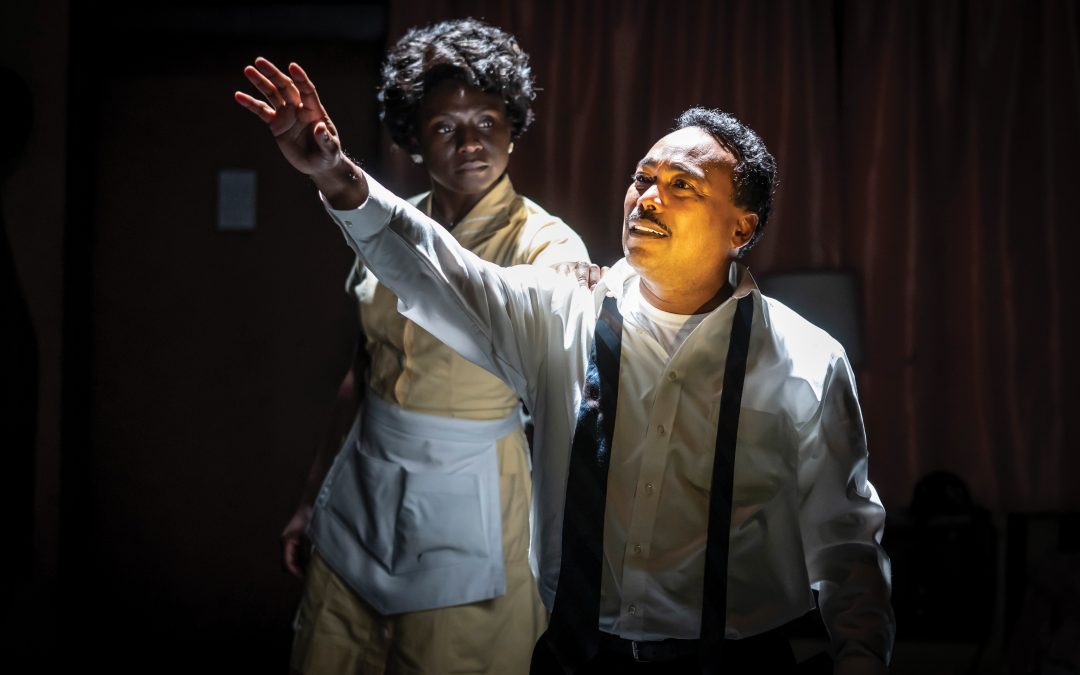 It is undeniable that American Players Theater’s 2019 production of Fences was a groundbreaking fete for what can now be regarded as that venerable theater company in Iowa County. Having experienced this season’s Mountaintop, in a socially distanced configuration of the Touchtone Theater, we can officially declare that APT’s Fences production was not a one trick pony, as far as showcasing Black actors and presenting culturally resonating themes are concerned.

Settling in for the evening in a lonely, dank hotel room after a particularly rousing oration on behalf of “sanitation engineers” in Memphis, Tennessee, King, played by Gavin Lawrence, decided to press forward just a little more that evening, to prepare for his next speech, as his minions were out and about. With no square meal available, he needed at least a cup of coffee to give him a boost. After typical southern banter over the hotel phone the manager duly sends King his coveted cup of coffee by what on the surface was, a young, dutiful, pretty – and vivacious female staff member of the hotel.

King is intrigued, if not outright attracted. After several clumsy attempts to pronounce the colloquial version of her name, he finally gets it right – Camae (Ca-may), who was played by the bodacious and emergent, Sola Thompson.

King’s innate humanity begins to surface as he engages in a fun and risque’ line of conversation.  In the day when far too many African Americans, especially ministers, smoked cigarettes, the reverend discovered that he could extend the presence of his amiable and eclectic visitor each time he pleaded for a cigarette. The play cleverly embedded a few subtle references to tangential societal issues, one of which was that the hotel maid carried nonmenthol cigarettes. The irony is that it is common knowledge that African Americans have been enticed by the tobacco industry into a deathly reliance on menthol cigarettes which mask their lethal toxicity with a cooling menthol flavor. (That is an entirely different topic for a different time).

As the evening wanes, with rain, lightning and uncannily timed thunder, the two characters discover a level of commonality and friendship that becomes borderline amorous. And then in a fit of coughing induced by the shock of a thunderous clap, King is unable to recover from a cigarette enhanced choking spell. Camae hovers over him as he lay on the bed face up where she is over him massaging his chest desperately trying to bring him out of his coughing spasm.

As Camae pleads with King to regain his breath, she yells his birth name, Michael. This instantaneously triggers King’s ongoing suspicion that the FBI and other detractors are constantly following him and even attempting to entrap him in order to thwart his movement for civil rights.

King is enraged as he believes that there is no way this hotel help could know his given Christian name without some sort of special intelligence. Well, there had been a small hint of the specialness of the person who had served the civil rights giant his coffee, and now Camae went on to reveal something that stuns the audience.

King has a loving and growing family and importantly, he has to lead a nascent movement which is just beginning to hit its stride. Speaking of stride, another sub issue within the play relates to the dichotomy between King’s nonviolent (march ‘til there are holes in your socks) philosophy versus the more aggressive Black Power stance of Malcolm X.

The play morphed from fiction, to outright whimsical at times.  In the end, the fiction gave way to the wrenching reality of King’s death on that fateful evening. It has been said that a person’s life flashes before them, fleetingly fast, as they recall the totality of their existence just before their ultimate demise. In the case of Mountaintop however, King is given a peek into the future, which of course, is today compared to 1968.

This glimpse into the future is presented by a flashing montage of video frames depicting milestones of history from 1968 to present, beginning with Robert Kennedy’s assassination (just two months after King’s death) ꟷ riots, Katrina, President Barack Obama ꟷ all the way up through George Floyd and the COVID-19 pandemic (and much more in between).

The video, running in tandem with the staccato-style recitation of these events rattled off with precise chronology and articulation, leaves the audience drained. It is likely that the entire audience adjusted their masks in unison as they dabbed at tears. while the video fast-forwarded evoking visceral memories and emotions.

As King finally capitulates to his unavoidable fate, Camae assured King that his civil rights movement will be left in good hands. The idea of a movement, Camae explains, is to do your part and hand the baton on to the capable others that follow. Audience members couldn’t help but think of their own mortality as they hear these words and ponder their personal heritage, life’s work and legacy.

The play’s overarching theme captures the timeless metaphorical battle between hate, as the ultimate vice, and love, as the kingpin of all virtues.

Theater is intended to engage, entertain, educate and even agitate. To the extent that is so, American Players Theatre has mastered the formula to nuanced precision. It’s nearly surreal to think that plays of the significance and caliber of Mountaintop are so available to the Dane and Iowa County communities. This is even more so now that this year’s repertory of plays will be recorded and streamed into our homes.  For those who want to see these glorious plays, all they need to do is go to https://americanplayers.org/apt-at-home and stream Mountaintop thru June 19th and others as they are released.

Note: Robert Wynn is an occasional writer for UMOJA Magazine, and he is a member of American Players Theater Board of Directors.