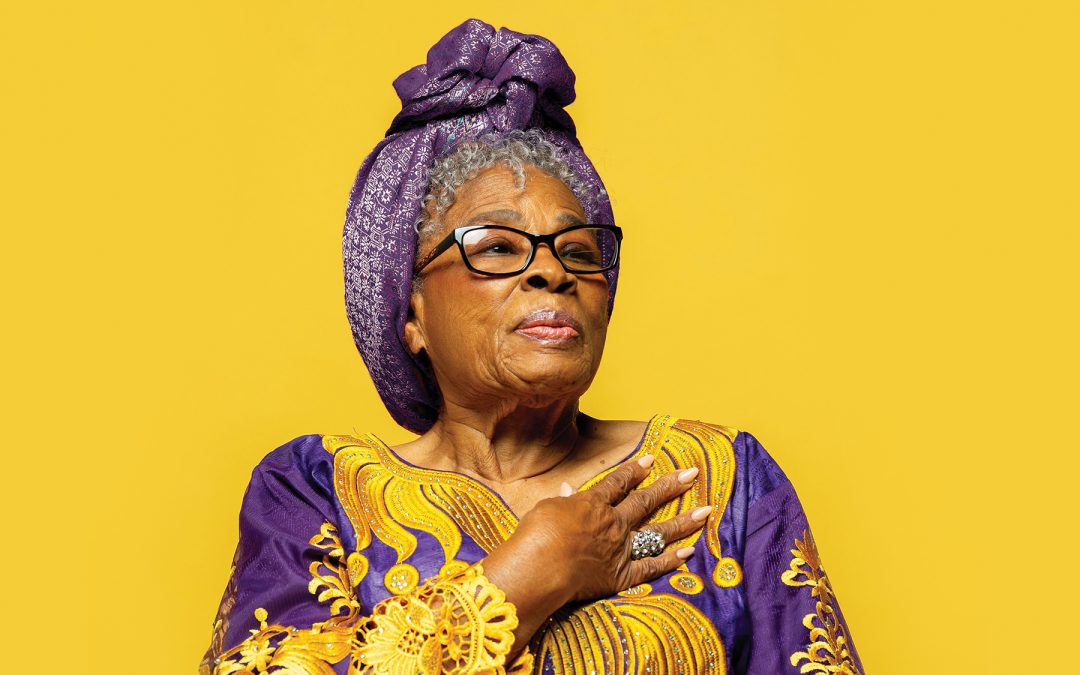 President Joe Biden graciously knelt before Opal Lee to look her straight in the eyes and thanked her personally for her dogged determination in making Juneteenth a holiday for all to observe. Elated, itching to do a holy dance, the 94-year-old civil rights activist reveled in the moment.

She held hands with Vice President Kamala Harris, the first Black woman to hold the title, just before being handed a ceremonial signing pen of the Juneteenth National Independence Day Act, held in the East Room of the White House, on June 17.

A whirlwind of media appearances followed, from Good Morning America to the BBC. Lee’s dream was realized.

“Now that our voices are being heard and the story of Juneteenth is being told, we must use this momentum to continue working towards unity, equality and freedom of all people,” said Lee, a retired educator. “This day is not a Texas thing or a Black thing. It’s an American thing.”

Feisty with fire still stirring in her belly, Lee returned to her Fort Worth, Texas home and is now turning her attention to the work that remains to achieve lasting change. Next up: Ensuring future generations know the seldom-told stories of nearly 250,000 enslaved African Americans in Galveston, Texas, who learned of their freedom two and a half years after the Emancipation Proclamation.

“My mission is far from over,” said Lee, affectionately nicknamed the Grandmother of Juneteenth. “There’s joblessness and homelessness and schools that don’t tell the truth, and health care and climate change. All of these disparities need attending to now.”

Most around Southeast Wisconsin aren’t surprised by Lee’s tenacious will to right the wrongs of the past. She is the cousin of Milele Chikasa Anana, beloved publisher and editor of UMOJA Magazine who died May, 6, 2020, at the age of 86. Ms. Milele’s grandfather and Lee’s grandmother were siblings, Lee explained.

As for Lee, being a defender of justice and a refuser to accept defeat, runs in the family.

“Oh, the things they did to Black people,” said Lee, who has held Juneteenth awareness marches in Madison and Milwaukee. “The truth has to be told, especial in schoolbooks. It’s a sore that has to heal so we can get on with making life available for everybody.”

Lee vividly recalls, as a child, how her mother made a special meal in observance of Juneteenth. They’d carry the cherished tradition from their home in Marshall, Texas, to a predominately-white neighborhood in Fort Worth. That was in 1939 when she was 12-year-old Opal L. Flake.

The oldest of three to Otis and Mattie Flake, the family were confronted daily by a hateful mob who didn’t want them living in the neighborhood. Days later, the angry white rioters swelled to 500. Lee’s parents sent their children away from their new home for safe keeping with family friends.

“My dad came home with a gun, and the police told him if he busted a cap, they’d let that mob have him,” she recounted. “They started throwing rocks and things at the house and before they left, they pulled out the furniture and burned it and burned the house.”

The heinous hate crime happened on June 19, 1939 ꟷ Juneteenth Day. Fort Worth law enforcement did nothing.

For most of her life, Lee has been petitioning and marching for the national recognition of Juneteenth, along with celebrating the excellence of Black culture and freedom. The words, “We hold these truths to be self-evident, that all men are created equal, that they are endowed, by their Creator, with certain unalienable Rights, that among these are Life, Liberty, and the pursuit of Happiness” have been problematic for many Black Americans.

Lee vowed to make a difference.

“I keep telling people that you need to make yourself a committee of one,” she said. “Not everyone is on the same page you are. Change their mind. If people can be taught to hate, they can be taught to love.

“And if we have an army of individuals changing people’s lives, we can get something done,” Lee added.

In 2016, the admitted rabble rouser and community activist became the face of the movement. Lee, then 89, laced up her sneakers and spearheaded a walk from Fort Worth to Washington, D.C., to take her case to then-President Barack Obama. News outlets across the country got wind of the mostly symbolic trek. She arrived Jan. 10, 2017, with a petition carrying more than a million and half signatures for a national Juneteenth holiday in tow.

In 2020, lawmakers introduced a resolution aiming to recognize the historical significance of the holiday, and the results on making Juneteenth a federal holiday were close.

Victory for the Ancestors

This year, America moved to designate Juneteenth as a federal holiday. The bill passed the House on June 16, paving the way for Biden to sign it into law. The legislation sailed through Congress, passing the Senate by unanimous consent less than a day earlier. The House passed the legislation in a 415-14 vote, with only Republicans voting against it.

Lee has authored a children’s book which offers an engaging way to introduce the history of slavery and freedom to children in words they can understand. Titled “Juneteenth, A Children’s Story”, can be purchased at opalswalk2dc.com/books.

“Education is what we need to tackle next,” Lee said. “We have to change the minds of textbook publishers. Pictures of folks picking cotton and smiling like they’re enjoying it is a bunch of bull. “The true story of folks unwillingly being brought here must be told. We’ve got some more work to do.”