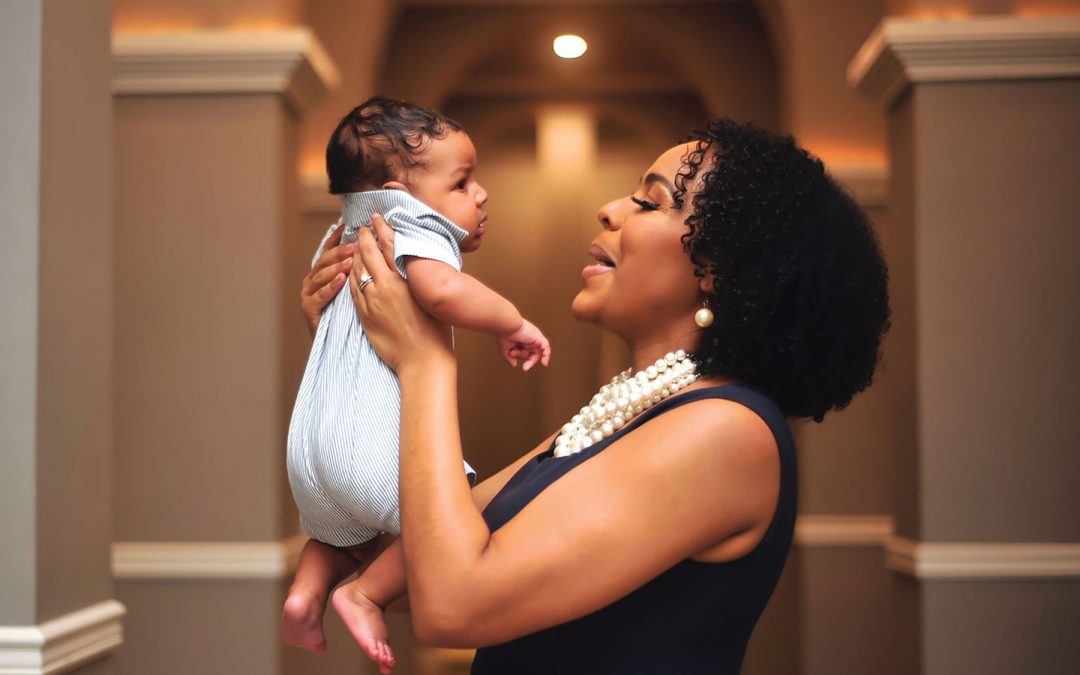 Christin Gates Calloway planned out her life on paper and followed it down to a T. She earned a master’s degree in education policy, landed a great job, and married the love of her life. The two, named one of UMOJA Magazine’s power couples, occupied much of their time seeing the world up close.

“We used to joke that we lived in the airport more than we did in Dane County,” said Calloway, whose husband is Kamal Calloway.

Life was so good. A doting aunt and loving stepmother to her “bonus son” Caleb, she and her husband began making plans to expand the family. The journey left Calloway feeling as if the whole world came crashing down around her.

In 2017, just before the two were headed off to another venture, Calloway handed her husband three passports. One for him. One for her. And one for their baby-to-be. It was her unique way of telling him they were expecting.

“My husband was shocked and ecstatic,” said Calloway, who is policy and program manager for the Foundation for Black Women’s Wellness. “We were filled with so much joy.”

Days later, she miscarried and painful shame and sadness followed. Rooted in faith in God, Calloway pushed past the grief and tried again. In the winter of 2018, she discovered she was pregnant again. She gave her husband a special Christmas ornament to surprise him with the news. Sadly, just before the holiday, she miscarried again. Then, nearly a year to the exact day of losing the second unborn child, the Calloways were expecting once again. The little girl growing inside, however, lived just nine weeks.

“That one was tougher because I heard her heartbeat,” Calloway said through tears of the in utero pregnancy. “It changes you.”

A strong group of pray warriors enveloped the couple. Calloway scoured fertility research articles for answers. Sunday church sermons reignited hope. The Sundays lessons served as a reminder that several women during biblical times faced birthing challenges. So, Calloway leaned on faith and mustered the courage to face life with a smile.

“I’m a visual person,” she said. “In Matthews 17:20, the bible says if you have faith the size of a mustard seed, you can move mountains, and nothing will be impossible for you. So, I bought a little jar and filled it with mustard seeds.

“It would remind me of God’s promises and faithfulness and to trust His time. You know, sometimes the answer may be no,” Calloway added.

She took long walks with her husband and started refocusing on obtaining a doctorate. Calloway started seeing a therapist that specializes in pregnancy loss. And, at the advice of a friend, she even created a “no-fear playlist” which included songs like Kirk Franklin’s “Love Theory” and J.J. Hairston’s “After This”.

“People talked about us taking the adoption route,” Calloway said. “Some people even began pouring their love into me and said it’s okay if this isn’t for you. I heard them, but I still wanted to try. My sister said every time I get pregnant, she cries tears of joy. Then, she gets scared because I wonder if I’m going to lose me sister in this process.”

Mother’s Day weekend in 2020, a home pregnancy test revealed Calloway conceived a child once again. The discovery coincided with a robin building a nest high above her front door. Calloway studied the mother and watched her lay and protect her eggs. Then, she wondered, if female birds suffer and feel the loss of her hatchlings, like she does with her unborn children.

There are about 23 million miscarriages worldwide each year, with Black women facing a substantially higher risk of pregnancy loss, according to research published this year in The Lancet. Miscarriage is when a baby dies in the womb before 20 weeks of pregnancy. Some women have a miscarriage before they know they’re pregnant. It can take a few weeks to a month or more for your body to recover from a miscarriage.

“One of the eggs fell on the ground and I just lost it,” she recalled.

“My robin stayed through the summer and I had her babies,” she continued. “I watched her and how the daddy bird would provide worms. I watched them raise them up. … I saw this family in nature right on my doorsteps. It was just so beautiful.”

Deep down in her heart, Calloway was ready to give up trying.

On July 27, 2020, she learned she was pregnant, again. Two days go by. Then two weeks. Before long, she could feel her baby kicking inside her womb. Too frightened to celebrate or enjoy her pregnancy, her warrior-like circle of family and friends did it for her. She went a step further, stepped out on faith, and allowed a photographer to catch her glow and protruding pregnant belly. Calloway was six-weeks away from delivering.

“Every now and then there were times I got so nervous,” she said. “I would start wondering if he stopped kicking. Just as I would begin to worry and get nervous, he’d kick me as if to say, ‘yeah Mom, I’m here.’ ”

On April 4, the 32-year-old mother gave birth to Jackson Cole Calloway on Easter Sunday. The 7-pound-11-ounce bundle of joy’s arrival came amid a pandemic, resulting in the Calloways introducing their new son virtually.

“One of the biggest lessons I learned is that it really does take a village,” Calloway said. “Sometimes when you can’t care for yourself, or you may struggle with faith, other people have it to hold you up and keep you encouraged.”

Calloway, who said she no longer adheres to a stringent plan to manage her life, has updated her playlist to more joyful songs.

“I had to learn how to say no,” said Calloway, a member of Mt. Zion Baptist Church Gospel Choir. “I had to say no to others, no to other circumstances and yes to myself without apologizing. And, I learned to truly enjoy the little things in life.”

A study released by the Lancet, a medical journal, shows 23 million miscarriages happen across the globe every year. This means 44 women suffer pregnancy loss every minute and Black women shoulder a heavier burden.