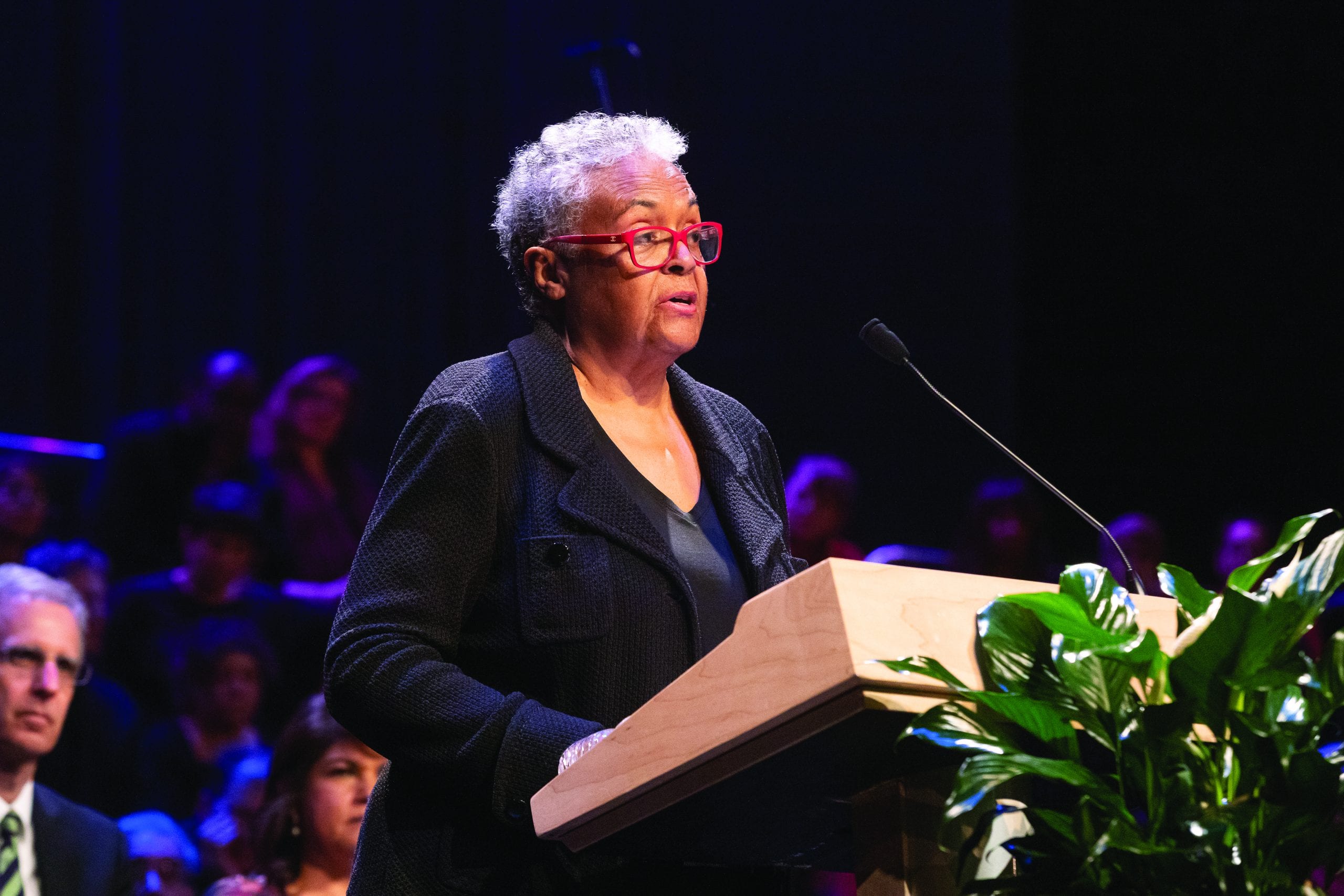 Joyce Ann Ladner is living history. She was on stage during Dr. Martin Luther King Jr’s iconic “I Have A Dream” speech. She stood in defiance outside the Sixteenth Street Baptist Church days after four African American girls were murdered in a bombing during church services. And she attended the funeral of her mentor and civil rights leader Medgar Evers.

As a field secretary for the Student Nonviolent Coordinating Committee, Ladner was on the frontlines during a period in this country’s shameful past that included lynching, marches and the Ku Klux Klan. She shared first-hand involvement to an attentive audience as keynote speaker during the 35th Annual Madison & Dane County King Holiday Observance, appropriately themed Still Marching: From Civil Rights to Black Lives Matter.

“Dr. King was for me and for those of my generation, a living, breathing human being,” Ladner said.

Ladner, a Battles, Mississippi, native who became a renowned activist, witnessed the “ordinary” things King did while organizing a movement determined to change the nation. Her commitment to change was personal.  Her skilled diesel engine mechanic father earned one-third of what his white coworkers earned. She couldn’t try on shoes or clothes bought at the local store. And, her educated great uncle, with impeccable taste in clothes, was often asked to “show us your tail, monkey” by Parisians when he traveled to France.

“We were called the Green Berets of the civil rights movement because we were the young staff people who dared to go into very, very tough areas before anyone else would …,” Ladner recalled. “I was all of 19 years old when I went to New York (summer of 1963) to work on the march staff.

“My job was to raise money to charter buses so that Black people from the deep South could come to the march. I’m speaking of Black people whose lives had been turned upside down by their involvement in the civil rights movement. Their homes had been bombed and burned and some had their bodies beaten all because they wanted to register to vote,” she added.

The March on Washington for Jobs and Freedom took place in Washington, D.C., on Aug. 28, 1963. Attended by some 250,000 people, it was the largest demonstration ever seen in the nation’s capital, and one of the first to have extensive television coverage. From the platform, Ladner said she was more in awe by the sea of people more than what King spoke about that day. She attributed it to being just a young kid.

What also sticks out in her memory is the way Mahalia Jackson, known then as the Queen of Gospel, was instrumental in King’s “I Have A Dream” message.

That ad-libbed moment would seal his place in history. Most pivotal moments in King’s life weren’t planned, Ladner found.

Her contribution to the civil rights movement didn’t stop there. She organized a NAACP Youth Chapter in her hometown. Membership cards for adults were automatic grounds for losing a job. Having rifles pointed directly at her and other young, peaceful protestors were common and acceptable.

She was expelled from Jackson State University for participating in a sit-in, and failed Mississippi’s voter literacy test three times. The stories of Black civil servant leaders dying one after another were accompanied with a far-off look in Ladner’s eyes, as if the painful events of the civil rights era just unfolded.

She shared how something in her soul died the day King was slain. She vividly recalled being among the tens of thousands of solemn mourners who walked in the processional behind the mule-drawn wagon carrying King’s casket to his final resting place in Atlanta.

“His death symbolized the end of my innocence and the end of the nonviolent era,” she said. “I once had hope as a young child growing up with a great deal of optimism about the future. I no longer had that.”

Ladner, a preeminent sociologist and author of Tomorrow’s Tomorrow: The Black Woman, concluded that the civil rights movement was a springboard for other social movements: women’s rights, student’s rights, and especially the Black Lives Matter movement. Civil rights activists marched in the 60s for the right to eat at lunch counters and to vote. Some rights were achieved but the right to vote iremains under attack, she said.

Other highlights of the evening included presentations of the 2020 MLK Emerging Leader award to Kenneth R. Cole and the Humanitarian Award to Ada Deer. Dane County Executive Joe Parisi and Madison Mayor Satya Rhodes-Conway presented the honor to the recipients.

Cole, who works for the Urban League of Greater Madison as a Schools of Hope and Youth Resource Center Coordinator, is most notably known for his efforts on UW-Madison’s campus in which involved the accomplishments of the UW-Blackout and Blindside campaigns. This resulted in a slew of demands and initiatives aimed at bringing access, equity, and inclusion to socially and economically underrepresented students on campus.

Cole grew up in South Central Los Angeles. He eluded gang life for church life. The seed for helping those in need was planted among neighborhood Christians.
“I learned that it is our duty to bring space, community and resources to those our society has left out,” Cole said. “I believe if the brother, Rev. Dr. Martin Luther King Jr. were with us today he would tell us that anyone can serve. … You too can serve, because your service matters.”

Deer has committed a lifetime to social and racial justice activism. She became the first American Indian woman to win the nomination of a major political party for congress, when she won the Democratic nomination for the 2nd District. After losing the general election, Deer applied for and became the assistant secretary for Indian Affairs for President Bill Clinton — the first woman to hold the position. During her tenure, 226 Alaskan Native villages as well as American Indian tribes in California and Michigan received federal recognition.

Our nation was born in genocide when it embraced the doctrine that the original American, the Indian, was an inferior race,” Ada Deer said quoting King. “We are perhaps the only nation which tried as a matter of national policy to wipe out its indigenous population.”

Deer challenged the diverse audience to bravely admit injustice anywhere is a threat to justice everywhere.